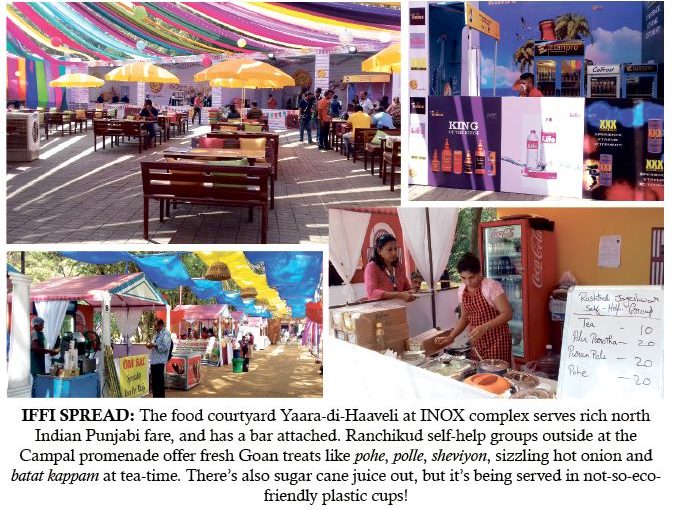 IT’S one more time for me at the International Film Festival of India (IFFI) and in between films I always enjoy hunting for a worthy bite. However, nothing pleases. This time, the Entertainment Society of Goa (ESG) has found a Pune caterer to set up a colourful food plaza that takes up much of the INOX courtyard, serving a north Indian menu, bar attached.

The same caterer also has a chaat bazaar, but I wasn’t very tempted. In general, it’s a good thing that I’m getting harder to tempt. It only means I’m eating out less and wasting less money.

On the first day, I hunted for Goan breakfast like steaming polle-chutney, pohe, shevion drenched in coconut milk, a decent cup of tea/coffee. But there was none of that, at least not in the INOX vicinity. The smiling self-help group women who come from Sattari, Valpoi and Mapusa were not there with their fresh fare – local bread, ginger tea, first class xitt-koddi, chappati-usal/sabzi, puranpoli/godpoli, sheera, idli–dosa–sannam–chutney, and more. I miss their warm camaraderie over food. Later, I found that they were on the Campal promenade in a special Ranchikud section, but it was too much walking to do in between film viewing.

This year there’s bottled water or booze if there is no free water! You’ll find Kingfisher and Kings beer, but why do thirsty delegates drink beer first thing in the morning? Perhaps they need their kidneys examined. The lack of potable water forces us to drink killer soft drinks and booze.

FOR the first time, I missed the first 8.30am film – German-Portuguese Fado. Since I hate entering an auditorium once a film has started, I opted to see Hunting Flies. The title is a metaphor for ‘how I will kill you before you kill me’ in war torn countries. This must be the film of this year’s IFFI! I was totally enchanted by this teacher in Macedonia trying to make his mixed bunch of war-affected students realise that no matter how grim life is, it is not about wanting to beat up and kill one another. In the end, the tough guy who everyone treats like a simpleton learns to laugh. I dare say everyone in the audience must have wept over him!

Later, a friend who’d seen Fado told me I’d missed nothing. It was not about graceful fado singing that’s familiar to us in Goa but, “full of sex”. The friend said: “Imagine first thing in the morning, I had to see this two-timing woman chasing sexual gratification like a nymphomaniac!” I smiled. I felt enormously cheerful for having seen Hunting Flies instead!

After the movie, I found myself at a fancy court by Yaara Di Haaveli – a Pune-based eatery connected with film star Om Puri’s family – at the INOX complex. There I ordered a chole-chaval (almost `160 after taxes) and then noticed they were making makki di roti. I returned the white rice for makki di roti (`21 per roti). It was okay – chole too spicy, roti too stingy, crusty, with burnt edges!

At IFFI, I check out meals thoroughly to see if there are any dead flies/cockroach eggs hidden within. I started doing this after one festival when I’d found a perfectly intact cockroach egg in my biryani. Also, some time ago in Sheetal in Panjim, I spotted a dead fly lurking in coconut chutney – the waiter tried to pass it off as a bit of smudgy dal of the tempering, but I pointed out that the chutney which had come with my disagreeable tomato omelette was not even tempered that morning. I’d paid and walked out, vowing never to return here again.

But to stay with the film festival, the food court and chaat baazar by Yaara Di Haveli are the only food outlets this year. They’re also doing machine tea and coffee for `21 per cup. On another day back there, I saw an amazing range of paratha – aloo-gobi, mulli-methi, mixed vegetable, paneer-cheese, palak-plain ajwain, mushroom, stuffed chole, onion, all at a standard `150.

I ordered an aloo-gobi paratha and it came with a small bowl of green peas-mushroom curry and a spot of fresh mango pickle. It was very good. But on yet another occasion, with the same order, the sabzi was missing in favour of onion kachumbar and raita. The latter was scrumptious and I could have made a meal of that alone. Funny, how value for money in the beginning turns into a disappointment as days go by at IFFI, at least on the food front.

Perhaps I’m just a carping fusspot. The Yaara Di Haveli menu is quite extensive. Want to eat palak lasooni khichadi/tomato rice with chutney/sarson ka saag with makai roti/Amritsari chole kulche? There are also starters of surmai fry/rawas koliwada, jhinga tawa/various kebabs/etc, but the pricing is too high. Most student delegates – and there are plenty of them – can’t afford to eat here.

Order wisely if you’re eating here. So-called mineral water is selling at `10 per bottle, but then again why is there is no free potable water arrangement? IFFI is quite thanda (as in cool) this year, although the films menu is garam – every film I’ve seen to date is a treat to cherish.

In any case, IFFI in Goa is my one annual holiday and films undoubtedly my opium! Life’s no film, but then again a good filmmaker could very easily make one on how I manipulate, juggle and come up with excuses to run away first thing in the morning to catch the 8.30am or 8.45am film. There’s very definitely a tilt towards Asian films this year and I like it. If you ask me, we need to discover our common roots and history in Asia more. They’re more like us even if there are some highly pedigreed white Caucasian genes in our racial melting pot here and there!

Outside the Korea stall at the INOX complex, in between films, delegates are playing a game of tossing long arrows into a decorative container at a distance. It’s a fun pass time! There is also a pretty young Korean girl distributing natural beauty products in cute bags, but there’s no kimchi to relish for love or for money.

One of these days I must clue you in about Korean kimchi as a desirable health food. Let’s say it’s the sauerkraut of the Koreans. Both I can pine for whenever I think of them, providing they’re real traditional stuff and not canned versions. Canned is second or third best. I’m thinking if the Germans have their sauerkraut, the Koreans their kimchi, what about us Indians? Do we have an equivalent? Yes, mango chepnim in Goa. If you don’t know mango chepnim, you don’t know Goa yet.