IFFI 2016 International Competition film…a still from the Polish film The Last Family. Will we still have a family unit as we know it in the near future? 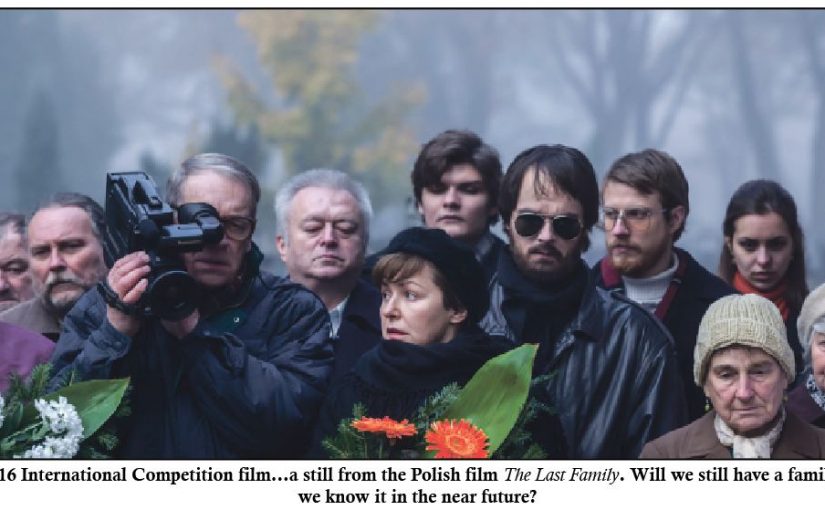 (SIGH) IF there’s no water, drink booze! Increasingly I get this feeling that that’s where we’re heading as a country.  My annual IFFI holiday is over and I must confess I’m down in the dumps struggling to be positive (like everybody else keeps advising me… don’t know if they’re advising me or themselves). I haven’t seen as many films as I’d have liked to this IFFI for a myriad fascinating reasons. Films-wise it was an all time low for me, my normal quota is at the very least 20 to 25 film, but this year I barely made it to a dozen odd films.  Oh well, be grateful for little mercies and all that, may be one of these days something good will happen (that’s my new line).

I’ve said all I wanted to say about the dismal eating and drinking arrangements at this year’s IFFI – the Kala Academy canteen was serving junk food and plates of stale fruit (I mean if you chop up water melon in the morning what will it taste like in the afternoon or evening?) and at the INOX complex the Yaara Di Haaveli monopoly dished up good and bad fare depending on the mood of their kitchen arrangements and cooks’ mood.

FUNNY, it was really a bit like the French queen Marie Antoinette, who became famous for her advice to the common people of France to eat cake if there is no bread! Some history experts say she never said that and she’s been misquoted to be remembered wrongly forever. But I quote this just so that you get the idea of how our higher ups increasingly suffering from a disconnect with ground reality for want of simple common sense.

I’ve been seeing the changing face of IFFI over the years, good, bad, ugly. Priorities just keep changing and they can’t make up their mind to focus on aam aadmi or khaas aadmi…this year I’d like to record that eating at IFFI was the worst ever. Little things irked like the provision of free potable water at least to delegates, surely that is primary? Most folk were forced to buy bottled water but I refuse to buy bottled water (it is actually more acidic than tap water boiled at home for drinking!) and contribute to our growing water bottle culture. There were delegates seeking and eventually buying pet bottles of water to quench thirst and of course piles of empty  plastic water bottle overflowed in the bins. At least I didn’t find a single water drinking water facility at this year’s IFFI.

MERCIFULLY, an INOX complex security guard guided me to a garden tap from where he was filling his own water bottle…and I cupped my hands and helped myself to tap water straight. I dare say tap water is better than bottled water even if not up to WHO standards. When did anyone last check out tap water in Panjim? One of these days let me tell you about the water we drink!

Other refreshments are of no help because I’ve long since quit drinking Tropicana and the like, be it so called aerated soda pop or even so called fruit juices. Most are pasteurized affairs, void of any nutritional sustenance, offering little else but chemical sweetness, artificial flavor…sugar-doped drinks only makes me more thirsty for some original natural mountain spring water (if I can get it). Hey, there’s no substitute for water in life and never will be except that many clued up urbanites are not questioning the quality of water our government provides us on tap, as in how alkaline or acidic it is?

Most of us court ill-health drinking and eating along acidic lifestyles. The more alkaline we live the longer and better we will last…that is if we want to last and endure and continue to take pleasure in life’s charms! Some seasoned IFFI-goers carried their own water bottle from home but these were confiscated by checkers before they let you get into the film auditoriums. My goodness, water is dangerous nowadays!

WAS nothing good? Of course, the films menu was sublime and…er…the washroom facilities at INOX theatre and Kala Academy were decent, much improved, thank you. The INOX washrooms are cheerful with their graphic graffiti designed loo doors! Alas, I quit seeing films ahead of time this year, didn’t feel like seeing more films than I already had. In any case after I see a particularly memorable film for our times I don’t feel like seeing another. I can never do back to back viewing like some delegates and a few media folk do.

SO after seeing director Jan P Matuszynski’s The Last Family (from Poland) I felt like I’d seen my final IFFI film (apart from the closing film). The Last Family details  celebrated painter Beksinski’s family life…here’s a man, a husband, a father who in an interview waxes lyrical about how would like to rape an 18-years-old pretty young thing with six PhDs. And she in turn could do ghastly things to him like breaking his finger bones and other gross brutalities!

Only the mother and grandmothers in this film are “normal” and hold the strings of a modicum of harmony together. Anyway, soon the grandmothers die, the mother dies, the only son dies and over his dead body father says “Congratulations!” His son has finally succeeded in committing suicide! This son who thought everyone over the age of 50 years should be treated to a   lethal injection putting them to sleep forever, much to the discomfort of the seniors in the family.

Then the indefatigable survivor father is killed brutally by a young man old enough to be his son! The climax is shattering and tells us much about how neurotic and dysfunctional our mod con driven nuclear family societies are becoming, alongside growing criminal tendencies in a younger generation. A layered, mind-blowing film. The Last Family is one very disquieting film for our times and afterwards I didn’t feel like going into another film. The film was an International Competition entry at this year’s IFFI and should have won the Golden Peacock award, instead of the Iranian film Daughter or Dokhtar directed by Reza Mirkarimi …but with both these films we do get some powerful insight into two extremist cultural situations facing our so-called modern, progressive world. See both films if you can.

AFTER that I went looking down the Campal promenade in search of comfort food courtesy the self-help group women of Goa, Vaishali Naik and friends. Aruna Wagh used to organize these self-help group women into providing the most desirable freshly prepared Goan food at the INOX complex and most Indian and foreign delegates welcome it, it also show-cases Goan food. I don’t understand why the ESG powers-that-be couldn’t facilitate the women into doing a similar great job this year, what’s the point of hiring a sole caterer from Pune to make whatever killing they may or may not have made?

Vaishali confided, “This time our stalls out at Ranchikud (outside the Forest Department gardens down the Campal promenade) were not well patronized and we couldn’t set them up early, few came to drink tea or eat pohe for breakfast; even our lunch meals went a begging …things only got better with the evening when we sold snacks.” One lunch  time I did walk down to them to enjoy a veg meal on a banana leaf (Rs120)… chappati, potato fryum, rice, curry, tamdi bhaji, kokum tival; non-vegetarians relished aromatic chicken and fish curries with rice/chappati.