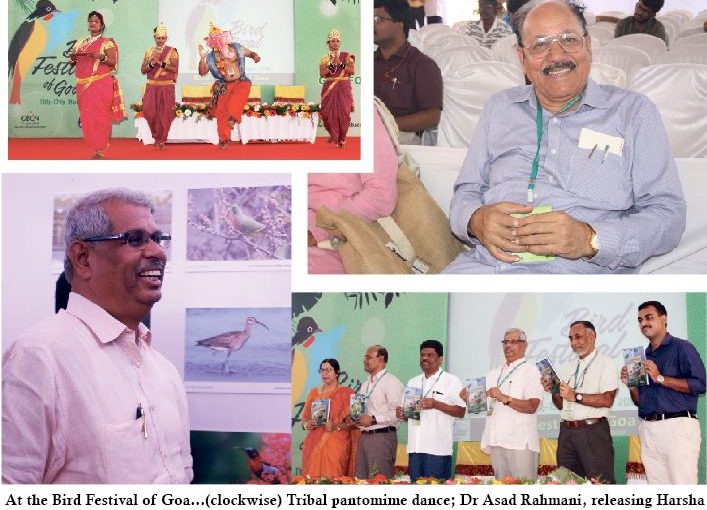 WALKING a bird-watching trail has its rest and recreational charms, my dears. I mean watching our feathered friends singing their songs to each other, oblivious to climate change and when their time will be over sooner or later…after all we human of the species are hell bent on playing Almighty God on the once-upon-a-time good earth, no???

But to go on the month that was November offered too many choices but I had to for the first of its kind Bird Festival of Goa (organized by the Forest Department at the Bondla wildlife sanctuaries over Nov 11-13). I wanted to catch up with some bird watching maybe as well as old friend from the Bombay History Society of India, Dr Asad Rahmani, who I think walks with distinction in the footsteps of the famous “birdman” Dr Salim Ali; Dr Rahmani had come to  Bondla for a few days.

It was much later in the morning by the time the media party got to Bondla for the inauguration of the bird week by Forests Minister Rajendra Arlekar. There was no bird watching for media of course, and the birding delegates who had registered stayed overnight at the Bondla cottages to indulge in the gentle passion of bird watching (may be indulged only in the wee hours of dawn or dusk). The birding community as it is called is growing everywhere, wherever folk are getting tired of urban life and its petty lack of manners!

Dr Rahmani was not up there on the dais at the main function and I am sorry. Instead I found him sitting with the rest of the audience and asked him if he was still chasing birds…er… of the feathered variety of course? Of course, he smiled, except that he has more or less stopped going on bird trails, being more interested in working behind the scenes to push for the conservation of biodiversity and the eco-habitats of avifauna. “Don’t quote me,” he said, “but this is the worst time for conservation!” it is difficult to make politicians understand the importance of protecting wildlife habitats and in his understanding something like 50,000 hectares of land is soon to be de-notified the country over for industrial takeover.

Sad to hear that, Dr Rahmani. I took a quick look at the excellent exhibition of bird pictures up and sighed because some of them may soon be gone with the wind in the wild…there is nothing as thrilling and educative as studying wildlife in it its own natural habitat, including watching birds, butterflies, some have a passion for other creatures big and small of the wild. There were several stalls put up to cater to the delegates and at the BNHS stall I noticed now there’re so many guides to bird watching in India. There’s a guide even in Konkani courtesy Harsha Shetye and Forests Minister Rajendra Arlekar released the book at the function. In his speech he was full of praise for the late Dr Salim Ali who studied the birds of Goa and after whom the Chorao Island Bird Sanctuary has been conserved.

LATER while chatting with him I asked him if he was an urban boy? He smiled, He is a Panjim and Vasco da Gama boy, quite an urban boy really and doesn’t much recognize birds (except presumably crows, sparrows, pigeons, peacocks!) but he acknowledged, “I am only the custodian of all this wildlife we have in Goa.” Wish he had gone bird watching down a trail with Dr Asad Rahmani and the delegates – it would have opened up a whole new world for him which deserves to protected against liquor businessmen! I understand Goa is much in demand for liquor industries quite simple because it has forest and village land and water in plenty; and saw several liquor factories in the Ponda-Bondla stretch. Funny, in Goa it’s always a case of if there is no water, drink liquor. No wonder kidneys and livers get pickled real quick!

THE thing is so many of us today grow up in urban settings and in the process lose our sensitivity to the call of the wild…if one has no idea of the charms of the wilderness, I guess it wouldn’t matter if one ordered the butchering of a mass of trees or the loss of wildlife habitat. And then say for example, when wild elephants come rampaging to eat up our crops we call them vermin and throw acid on them! Mother Earth can really do without the most predatory species of them all – humankind. We are a deadly race, a killer civilisation!

This is to say one of these days do some bird watching beyond the usual urban birds and you will feel so rewarded. Join the Goa Bird Conservation Network (GBCN), it conducts bird walks on the first Sunday of every month. GBCN was founded by the late Carl D’Silva, wildlife artist and a bird lover who is much missed for his fine detailing of birds in the wild.

Needlessly to say GBCN helped organize Goa’s first ever Bird Festival, it is also engaged in various activities to protect and study the birds of whatever wild Goa is left today for us to take pleasure in.