STOCKTAKING ON `WORLD AIDS DAY’…India is not the world capital in HIV/AIDS mortality but there is enough to worry about! 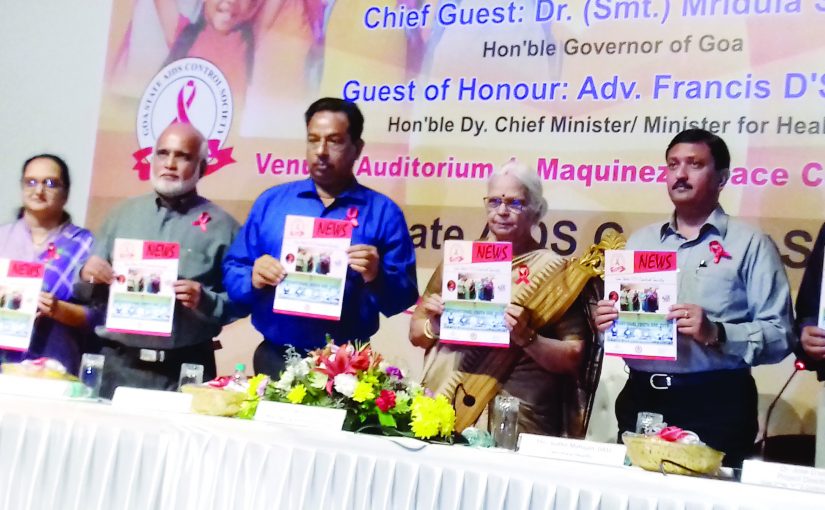 WHO doesn’t fear HIV/AIDS? Most of us still fear the dreaded disease which kills if it is not treated in time. AIDS has spread its tentacles the world over and although in Goa there has been a steep decline in mortality (almost 50%) HIV/AIDS it still manifests in an epidemic form and is being fought on a war footing around the world. Especially when drugs used to treat the disease fail to treat due to the rapid mutation of the AIDs virus.

World AIDS Day was observed on Dec 1 by various groups engaged with treating and counseling the HIV/AIDS patients. The theme this year is “Hands Up for HIV Prevention” and the fight goes on for a No AIDS-Zero Infection world by 2030. Speaking at a function organized in Panjim on Dec 1 Deputy Chief Minister Francis D’Souza spoke of how for the NGOs engaged with treating HIV patients it is sometimes “tireless work, thankless work,” yet he has personally seen the remarkable work they’re doing with the 253 boys affected by the disease in Goa.

He recalled how he had come into contact with an AIDS patient from Parra long ago, “He had to be quarantined at the TB hospital at Corlim…those days we were told to stand far away, don’t touch the patient!” Mercifully, all that has changed now and we do not treat HIV/AIDS afflicted victims as outcastes anymore. He is not sure if the world will be free from this dreaded disease by 2030 because the disease has become difficult to treat with “multi-drug resistance,” but this is a challenge everyone should get involved with.

Governor of Goa Mridula Sinha had some words of sadness and wisdom to offer. She quipped that there must be three generations present at the function and when three generations can sit down and talk to each other many problems can be solved, “In my time the younger generation was guided by grandparents and I remember my grandparents in Delhi who told me where not to go and what not to do…..” She reminisced about a young woman who used to work for them who contacted TB, she did her best to help the young girl but in the end she passed away. Since then she has been conscious of the need not to isolate people who’re suffering from any dreadful disease like tuberculosis and today both treatment and counseling must go hand in hand, this is necessary, “Counseling especially is very difficult to do.”

There are about eight organizations working with HIV/AIDS patients in Goa under the Goa State NGO Forum on HIV/AIDS, namely Positive People (Moira), Human Touch (Cansaulim),World Vision (Margao), Presenation Society (Vasco), Asro (Tivim and Cavelossim), Voluntary Health Association of Goa (Panjim) and Lifeline Foundation. Goa is home to more than 253 children and adolescents living with HIV and Lifeline Foundation has analysed the main obstacles affecting their treatment and have come up with an action plan to ensure that they are not left behind. Adolescents and children are some of the saddest victims of the disease.

According to one senior medical officer engaged in HIVS/AIDS work, “At the GMC pediatric OPD 14 we see about 100 patients on an average…but since the main cause of infection is sexual contact (93.7% of the time), I think we need to do urgently is to reach out to educate and protect youth by imparting knowledge about how the disease is contacted…there must be sex education in the 8th/9th standard onwards. Only knowledge and guidance can empower them and keep them safe from contacting AIDS.” Of the 200 children registered with them, she says, they are treated not just for the disease but also for depression. AIDS and depression have to treated together.

Anyone below the age of 18 is an adolescent. At the GMC they have a Yuva Clinic attached to the OPD which works from 9 am to 4pm every day and there is both a doctor and a counselor here. IV drug abuse, AIDS, hepatitis B and C (more deadly) is what they see routinely and the main problem is patients come for treatment when it is too late, “They may be aware they have AIDS but keep quiet about it as long as they feel healthy and only when they fall sick, suffer from fever… they seek treatment and by that time it is often hopeless.” She also said, “We need to pay attention to young girls who’re abused and present with HIV positive…vertical transmission of disease from mother to children is common.” Migrant communities living in slums are most vulnerable to contacting HIV/AIDS.

detected in a foreigner. In 1988 an Indian but a non-Goan case was

detected. In 1989 there was a first case detected in a Goan student.