The noted Cardiologist, Dr Francisco Colaco stressed the importance of supporting local secular parties which will treat the Goan people as their High Command. Dr Colaco was addressing the gathering after inaugurating the Velim office of Goa Forward in the presence of the party candidate Anthony Rodrigues. 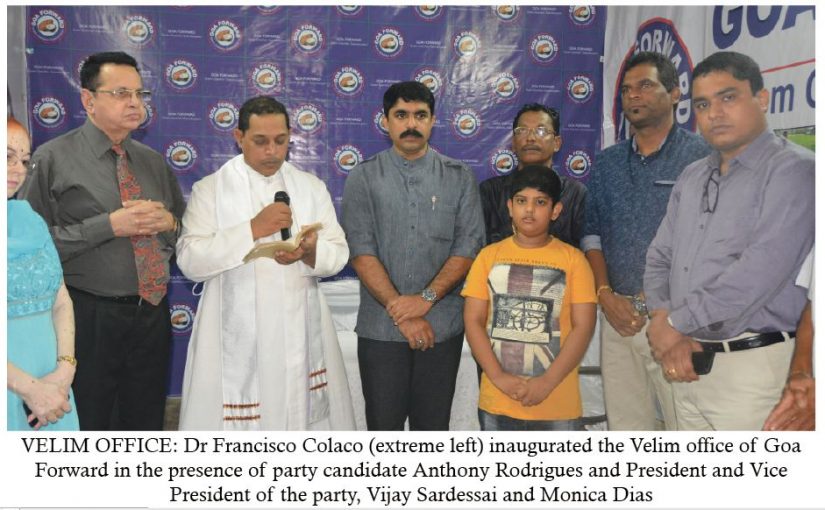 By our special correspondent

Dr Colaco stressed that neither of the National parties, the Congress of the BJP could deliver as they were remote controlled by their High Commands located in Delhi. The same was true also of the Aam Adami Party headed by Arvind Kejriwal. It is not the local residents of Goa who choose the candidates but the High Command of the national parties. Even the Chief Ministers of the State have been imposed on Goa by the High Commands of the National Parties.

Dr Colaco reminded the large crowd present for the launching of the campaign of the Velim candidate that it was because of regional parties like the United Goans led by Jack Sequiera that Goa was able to win the opinion poll and maintain its independent identity. Similarly it was local groups who ensured that Konkani became the official language of the state.

Dr Colaco pointed out that leaders sitting in Delhi could not understand and appreciate the problem of Goa. Giving an example he cited statements made by the former Chief Minister Manohar Parrikar and current Chief Minister Laxmikant Parsekar that Goa will be cashless by December 31st. How is this possible when more than 40% of the population have neither debit and ATM cards or smart phones. It is an absurd situation where Goans cannot withdraw their own hard earned money from the banks.

Dr Colaco called upon Goa Forward to revive the glory of Goa pointing out that the small state of less than 10 lakhs ethnic population had produced outstanding scientist like Dr Raghunath Mashelkar, former Director General of CSIR and Dr Anil Kakodkar Chairman of the Atomic Energy Commission. It has also produced musicians like Lata Mageshkar and Braz Gonsalves. The family of Vijay Sardesai themselves had contributed literary giants like Dr Ravindra Kelekar and Dr Madhovi Sardessai. Dr Colaco asked Goa Forward to promote the culture of excellence and encourage the return of highly qualified Goans back to Goa to serve their own people. In the tradition set by Dr Guru Prasad Naik who has returned from the United States to head the Cardiology Department of the Goa Medical College.

Dr Colaco also asked Goa Forward to impart skills to Goan youth so that they can get jobs both in Goa and other parts of the world. Politicians have been only looting youth by selling government jobs to them. Goa Forward must encourage self employment, Dr Colaco stressed.