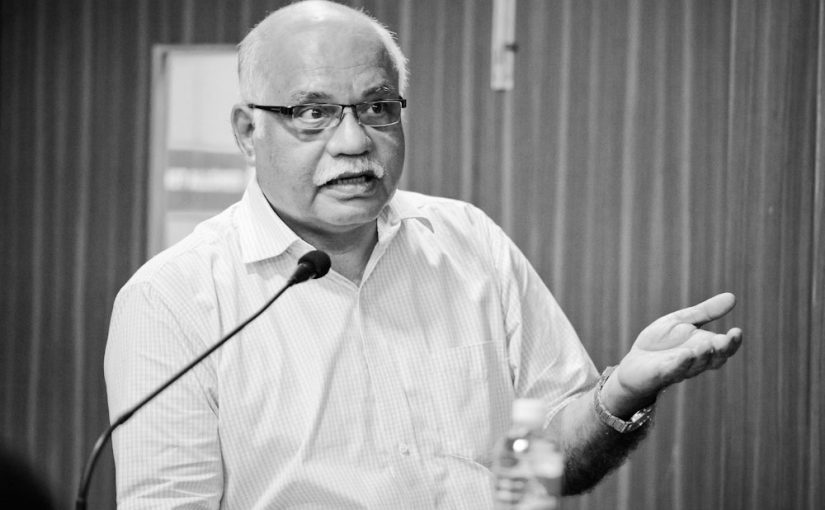 PROTEST: President of Goa Forward Prabhakar Timble led the party in protest against the latest rules on demonetisation and withdrawal of currency in an open letter to Reserve Bank of India governor Urjit Patel

The Goa Forward party has lodged a strong protest in an open letter sent to Reserve Bank of India governor Urjit Patel, on December 21. The letter-cum-memorandum conveys the general discontentment and suffering of the general public against the manner in which the withdrawal of existing `500 and `1,000 currency notes is being carried out with reference to RBI circular DCM(Plg) No 1859/10.27.00/2016-17 dated 19/12/2016.

Below is the full text of the letter-cum-memorandum which has been e-mailed to the General Manager of RBI, Panjim:

“This memorandum is to express our strong protest and discontentment over the manner in which the Reserve Bank of India and the entire banking sector has handled the demonetisation process since November 8, 2016. We are agitated and enraged that even after 42 days people have to queue in banks and before ATMs. From day one there is cloud of uncertainty as the Reserve Bank of India has been playing with the manner of deposits and exchange of specified bank notes and making matters cumbersome, complicated and difficult for the people and the common man. Frequent change of rules is nothing short of negligent and careless handling. This brings the RBI, the apex monetary institution, to shame apart from the agony and gross inconvenience it causes to the people.

Mr Governor, we need an answer from you to these six questions:

Mr Governor, your latest circular dated December 19, 2016, is atrocious and causes irreparable inconvenience and pain to the common man. Granting power to the bank officers to accept/reject legal tender currency is arbitrary, unfair and unguided discretion. The RBI and the Finance ministry had earlier guided the people to avoid rush in the banks as the time provided for exchange of specified bank notes was up to December 30, 2016. The sudden brainwave of imposing restrictions and roadblocks on deposits of specified bank notes has caused grave inconvenience to the people. This comes at the time of Christmas season and New Year which also coincides with the peak tourist season in Goa. This worsens the position not only for the minority community in Goa but for all Goans as Christmas is celebrated with pomp and joy by all communities in Goa.

Mr Governor, we demand the following:

A) The circular dated December 29, 2016, putting arbitrary restrictions on deposit of specified bank notes be immediately withdrawn and the illegal, unguided power given to bank officers to investigate and question depositors which inhibits free deposits be cancelled immediately. The curbs cannot be imposed as per whims and fancies.

B) ATMs be made fully operational with no restrictions on withdrawal. It is high time that normalcy is restored and particularly because of Christmas and New Year.

D) Notes of lower denomination be made available as per the demand of people.

Governor Sir, the flawed and negligent conduct of the RBI has brought undue misery to the people of this country. It has undermined the authority of the RBI and the people are losing confidence in this apex monetary authority.

Governor Sir, India is the country of the unorganised and informal sector. It is a nation  of small business establishments, mini-retail outlets, farmers, petty traders, home enterprises, hawkers and street vendors. You cannot afford to put all of them on fire as per your whims and fancies.

The people have shown controlled intolerance to all the illegal conduct and actions of the RBI. The contents of your orders and circulars are not backed by law. Do not wait for the people to take the law in their hands and make the banks and officers their target.”

The letter-cum-memorandum has been signed by Prabhakar Timble, president, Goa Forward Party, with copies to Jaikishan, RBI general manager in Panjim and zonal manager, State Bank of India, Panjim, to issue instructions in respect of the demands in view of Christmas and New Year in Goa.