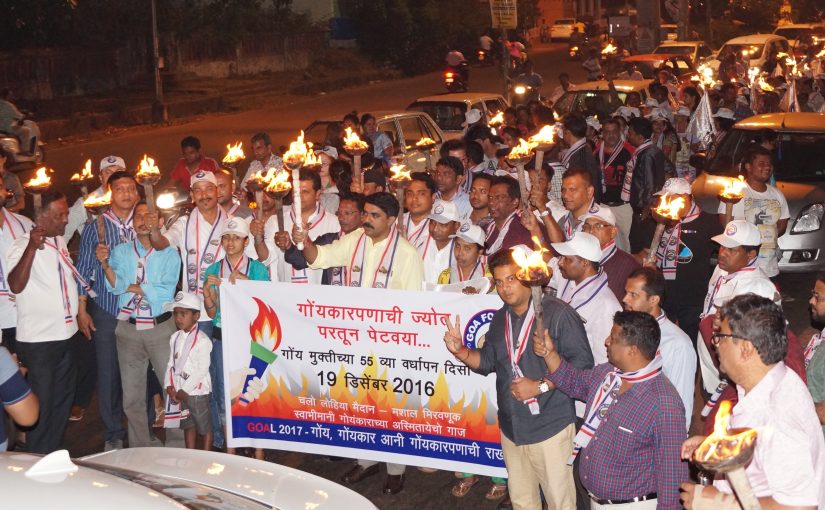 LIBERATION CELEBRATION: Party workers and friends of Goa Forward got together to celebrate Liberation Day on December 19, holding rustic torches high for Goenkarponn, Goan asmitai and better, healthier, happier days ahead for all Goans in 2017. If you’re voting, vote for the kalpavriksha or wish-fulfilling fruit of life – Goa Forward’s symbol is a coconut!

Goa Lokayukta Justice PK Misra has directed that notices be issued to South Goa Planning & Development Authority chairperson Mauvin Godinho and member secretary K Ashok Kumar. They were issued after hearing a complaint alleging massive corruption in the SGPDA in trying to illegally and hurriedly approve the Outline Development Plan for Margao and Ponda. While fixing the matter for hearing on December 26 at 11.30am Justice Misra directed K Ashok Kumar to produce all records including those relating to consultations with the Margao and the Ponda municipal councils. Kumar has also been directed to produce records relating to issuance of notice to all SGPDA members for meeting on December 15 and subsequent meetings if any.

`THE smaller the head, the bigger the dream!’ So goes a saying. Minister for Road Transport & Highways Nitin Gadkari recently laid the foundation stone for a four-lane highway with dreams of a coastal road on lines of the Las Vegas-San Fancisco Pacific Coastal Highway. It must be beyond his comprehension that Goa is just a small state with an area of 3,700 sq km, covered with villages, ancestral homes, agricultural land and no barren  stretches. Such a small area does not need broad highways dissecting them and destroying not just the ecology, but the very identity of Goa. The BJP government is bull-dozing projects at whim in the name of development, instead of leading the country to progress!

HOW TO DESTROY CAMPAL!

THE Campal and Miramar beach stretch is already crowded with garbage strewn everywhere! But it is now facing its biggest challenge. If not protected, it will be in a worse state than ever before. A ropeway is planned from indoor stadium to the other side of the river Mandovi, an extension by a five-star hotel, and a football stadium at Campal. Imagine what these projects will do to Dayanand Bandodkar marg?

The ropeway and hotel extension are planned just a few metres from the high tide line with no mention of  relevant compliance to CRZ regulations and brazen flouting of environmental norms. The ropeway is located at points which will surely spell disaster and turn dangerous with powerful monsoon winds.

Building such white elephants makes no sense when tourism in Goa is in a crisis, when stakeholders as well as the CCP are petitioning the Tourism Department to help safeguard Goa’s real assets – the once healthy environment and robust local culture!

The resort is extending its reach to Miramar beach and along with concrete structures mushrooming all around will cause the beach to lose its charm. It hosts migratory birds and is one of the few friendly family oases for locals and visitors to enjoy the breeze and sunsets.

The planned football stadium at Campal will make matters even worse just to fulfill the vision of the BJP and garner publicity for the forthcoming elections! The Campal space where the stadium is proposed is fraught with obstacles on all sides. It is clearly and closely surrounded by multiple structures. Kala Academy and the Campal grounds are where festivals, exhibitions and events such as the Grape Escapade and food festivals are scheduled; there is the indoor stadium, Bal Bhavan, Campal Clinic & Hospital, Fire Brigade quarters, Caculo Mall. All these have a heavy footfalls.

Apart from existing structures, two huge eight-storey  buildings have come up on the northern side of this area. Altogether it makes for heavy traffic congestion and frustrating jams. A foundation stone was laid down on May 1, 2016, by Defence minister Manohar Parrikar and others for the new football stadium at Campal. It must be put off in the interests of the quality of life of residents at Miramar, Campal and even Caranzalem and Dona Paula.

As it is, all events in this stretch have become a hassle and headache for residents –  Dayanand Bandodkar Marg is already impacted like never before and to think that ambitious city fathers and politicians in power don’t even think of how permanent changes proposed in the name of development will further impact the future of Panjim and pave the way for permanent nightmares.

Recently I was called for a hearing by the Goa Human Rights Commission. Apparently, a previous letter of mine regarding concerns about the proposed stadium were noted by the Central Human Rights Commission in New Delhi, which directed the Goa HRC to treat it as a petition. I was happy thinking that our residents concerns would be addressed. However, I was surprised to learn that the Goa HRC did not think the matter was related to human rights. They called me since they were directed to and then dismissed my petition. I was told that if I wanted to address this issue I should get through to the NFPDA or even approach the courts for arbitration. A pity that public quality of life is not considered important enough to be human rights! I cannot fight this battle to safeguard Goa and the life we are accustomed to on my own, and can only hope the  government hears the voices of people like me and stop such anti-people projects.

Diana Pinto: Or is this a ruse by the government to deflect blame for its inefficiency and lack of preparation onto the banks?

Diana Pinto: Anyway the decision makers should be held accountable because they should not have implemented it until their processes and procedures were in place and they were confident of doing so with minimum disruption to the people.

Judith Baptista Almeida: Thank you Goan Observer. One such bank has been HDFC in Colva. It has had too many such standing statements. One such one was exposed. Complaints filed including to the Colva police station. Hope Mukesh Chander will investigate.

Judith Baptista Almeida: Diana Pinto, I agree with your opinion. The cart was put before the horse or was it intentional?