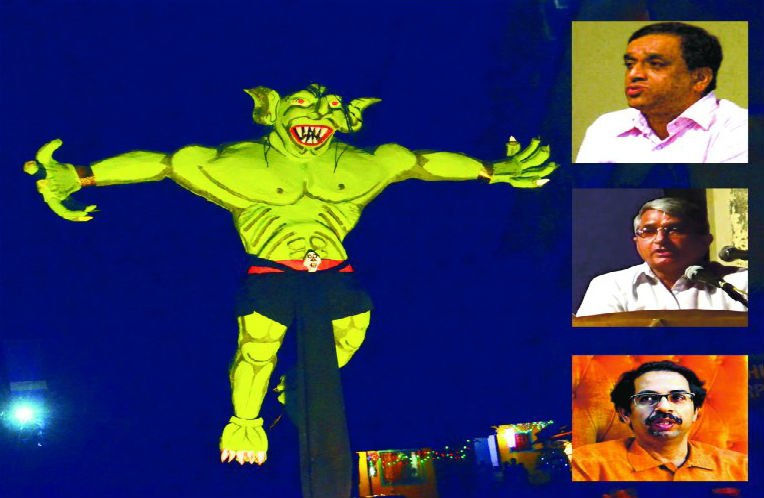 DEVILISH: The Dhavalikar brothers are reportedly closely linked with the Sanatan Sanstha which has been implicated in the murder of three Indian rationalists – Dr Narendra Dabholkar, Govind Pansare and M M Kalburgi. The Sanatan is also alleged to have been behind the bomb blast in Margao on the eve of Dussehra in 2002

The biggest nightmare that looms over Goa is the certainty that a mahagathbandhan of narkasurs – the Sanatan Sanstha linked to the fanatical Rashtriya Swayamsevak Sangh-controlled Bharatiya Bhasha Suraksha Manch and the intolerant Shiv Sena – may form the next government in Goa after the 2017 Assembly elections. The nightmare has become a grim reality after the alliance between the Bharatiya Janata Party and the Maharashtrawadi Gomantak Party recently broke down

THE alliance formed by former Goa chief minister Manohar Parrikar and Bharatiya Janata Party (BJP) president Nitin Gadkari during the 2012 Assembly election is on the verge of a break down. The Dhavalikar brothers have publicly snubbed current chief minister Laxmikant Parsekar, insisting that they will not be part of the alliance with the BJP if Parsekar is projected as chief minister . Sudin Dhavalikar, the corrupt Public Works Department minister who is very close to current defence minister Parrikar, has pointed out that the 2012 alliance was formed on the assurance that Parrikar will be chief minister. Parsekar’s leadership is not acceptable to the Sudin Dhavalikar who has ambitions of occupying the kodel himself.

THE Maharashtrawadi Gomantak Party (MGP) under the Dhavalikar brothers is very different from the original MGP formed by Dayanand Bandodkar. Bandodkar’s MGP may have wanted Goa to merge with Maharashtra, but he graciously accepted the results of the 1967 opinion poll. He may have been against the bhatkars, both Hindu and Catholic, but he was not communal. He was no doubt in favour of Marathi being the official language of Goa, but was not against Konkani. Above all, Bandodkar was genuinely interested in the welfare of the people and was never accused of corruption.

The Dhavalikar brothers who have taken over the MGP are both corrupt and communal. Sudin Dhavalikar is even more corrupt than Churchil Alemao as PWD minister in both the Digambar Kamat government and the Parrikar government. The MLA who registered the highest increase in assets between 2005 and 2007 was his brother Deepak Dhavalikar, whose assets increased by 848 per cent from `1.41 crores to `13.40 crores.

The Dhavalikar brothers are also far more communal than the BJP. They were in favour of permitting the Ram Sene which attacked churches in Karnataka to set up an office in Goa, and applauded when the outfit attacked a pub in Mangalore and manhandled young women partying there. The brothers believe that women should not wear bikinis on the beach. They probably think that like the Afghan hockey team plays with burkas and hijabs, tourists should also wear burkas on the beach.

A MATTER of greater concern is the close links of these political monsters to the Sanatan Sanstha. The brothers have openly acknowledge their close links with the Sanstha, whose members are the prime accused in the murder of three rationalists – Dr Narendra Dabolkar, Govind Pansare and M M Kalburgi. During the recent Dakshinayan convention, a resolution was passed to set up a special court to try the Sanatan-linked murderers. The primary accused in the murder of the rationalists, ENT surgeon Virendra Tawde of the Kolhapur unit of the Sanatan, has been officially charged. His wife, who was also a sevika in the Panvel ashram of the Sanatan, has disclosed that psychiatric drugs were administered to the residents of Sanatan ashrams under the pretext of giving them holy medicines.

The Sanatan has been implicated in the 2002 bomb blast in Margao to protest the so-called glorification of Narkasur which the Sanatan objected to. Then chief minister Digambar Kamat narrowly escaped with his life. The prime suspect had spent considerable time in the Sanatan headquarters in Ponda’s Ramnathi Temple. The Goan Observer had placed on record a training manual in which sevaks and sevikas of the Sanatan were trained to use lethal weapons like guns and swords to target members of the Muslim and Catholic communities. We take pride that the criminal case filed against Goan Observer by the Sanatan Sanstha was dismissed by the Ponda District Court.

THE Dhavalikar brothers who are closely associated with the Sanatan Sanstha to the extent that Deepak Dhavalikar’s wife, a former banker, looks after its finances. The combination of Bharatiya Bhasha Suraksha Manch (BBSM) and Shiv Sena, who may enter into an alliance with the BJP, will be disastrous for Goa.

The BBSM is dominated by the RSS which is committed to a Hindutva Goa where there is no place for the minority Muslim and Catholic communities. It is adamant that grants extended by Parrikar and continued by Parsekar to English-medium primary schools be suspended with immediate effect. Both the MGP and the BBSM want Marathi to share equal status with Konkani as Goa’s official language, which means that Marathi mausi will throw Konkani mai out of our own house.

The situation was so grim that when some very distinguished residents of Mumbai led by advertising guru Alyque Padamsee went to the Maharashtra chief minister, he claimed he was helpless and directed them to Shiv Sena chief Bal Thackeray.

IF THE alliance between the BJP and the MGP breaks up, the unholy trinity of MGP (or rather Sanatan Sanstha), the BBSM which is the front for RSS, and the fascist Shiv Sena may take over Goa. If they do, it will be much worse than the original MGP objective of merging Goa with Maharashtra.

If the three narkasurs come to power together, they will destroy the communal harmony for which Goa is famous the world over. We must all work together to keep out the Sanatan-tainted Dhavalikar; BBSM dominated by RSS fanatics and the dadagiri of the Shiv Sena.

Goa is facing its greatest threat since Liberation and all secular forces must unite to combat the latest disaster.