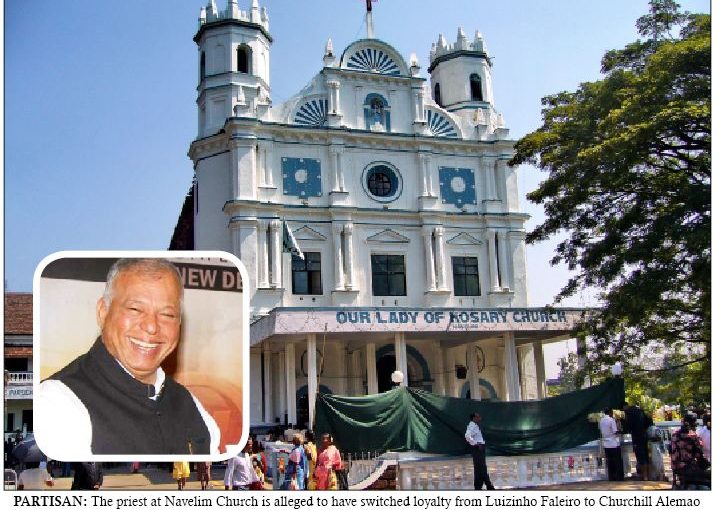 PARTISAN: The priest at Navelim Church is alleged to have switched loyalty from Luizinho Faleiro to Churchill Alemao leading to the former’s defeat

The Church in Goa has been accused of trying to influence voters with some parish priests supporting corrupt candidates. Bishop Filipe Neri Ferrao insists that it issues guidelines and does not endorse parties or candidates

As Goa prepares to vote for assembly elections, there have been cases where priests are witnessed openly canvassing for specific candidates from the pulpit. During the Christmas vigil service, parish priest of St Michael’s parish in Taleigao Fr Mariano Conceicao encouraged his parishioners to cast their vote for Atanasio (Babush) and his wife Jennifer Monserrate.

He tried to justify his announcement by claiming that he wasn’t “promoting any party or election candidates” in particular but was “acknowledging” the work done for the parish by the couple who are planning to contest the upcoming polls.

But in his own words recorded on video, Fr Conceicao appealed to the congregation to bring the couple back to power with a thumping majority. He said this could be the best Christmas gift for the couple, as they have assisted the parish in different ways.

A few days after this pulpit endorsement, archbishop-patriarch Filipe Neri Ferrao emphasised during a public function that the Church in Goa would guide the people to exercise their civic right and vote according to their conscience. He said, “We do issue guidelines to our faithful on how to exercise their franchise and thus fulfil one of their sacred civic duties; these guidelines are read out in our churches, but they never mention the name of any candidate or political party.”

Justifying a meeting with government officials, archbishop Ferrao added, “Secondly, our institutions work under the law of the Church, but also under the law of the land. For their optimal functioning, there is a need of maintaining regular contact with the government authorities. It is regrettable that sometimes such contacts are not understood in their proper context and are even criticised in the public square.”

On December 22, Fr Zeferin D’souza was seen engaging in a high-level Bharatiya Janata Party (BJP) meeting, attended by Nitin Gadkari and Manohar Parrikar. This move aroused speculations of the Church’s role in influencing the vote, although Fr D’souza denied all speculations, and affirmed that the meeting was just for a couple of minutes to meet defence minister Parrikar regarding an educational issue.

Another parish in Cuncolim had released a newsletter endorsing the candidacy of Joaquim Alemao, currently contesting as an independent candidate. Highlighting his work, the parish priest endorsed his candidacy.

History shows that “politics from the pulpit” is rampant in Goa; priests endorse candidates irrespective of their parties. Political analysts had observed that the Catholic Church in Goa played a key role in influencing the vote in favour of the BJP during the 2012 assembly elections.

However, the big political debate continues within the Church, as to where the line is drawn for clergy, when it comes to endorsing any particular candidate. A priest from Goa, who did not wish to be identified, said, “Although the official stance of the archdiocese for this election is to encourage the people to vote as per their conscience and for the right candidate, there are a number of priests within the archdiocese who have openly canvassed from the pulpit for particular candidates and parties.” He further said, “These candidates have secured these endorsements after ‘doing favours’ for the parish, as in the case of Taleigao.”

Supporting Fr Conceicao’s announcement, Jude D’cruz from Panjim said, “I don’t see anything wrong with priests endorsing certain candidates because priests are citizens themselves and have a right to vote. Hence they are free to endorse any candidate for elections.”

History has shown that the Church in Goa plays a very important role on political issues. Priests are usually treated with a great deal of respect, and in most cases what they speak is “gospel truth’’. However, considering the current political scenario, there seems to be a growing change among average Goan Catholics, and they now refuse to be influenced by the opinion of their parish priests.

A voter from Panjim, who did not wish to be identified, said, “I watched the video of Fr Conceicao but despite his opinion, I don’t think I would waste my vote for Babush and his wife. I will cast my vote for the right candidate based on my assessment, even if they are considered new to the political arena.”

A source from the priestly fraternity of Goa said, “While it is evident that priests are openly supporting and endorsing certain candidates, it is also very prevalent that politicians are playing the religious card to influence the voters.”

He added, “If we look at the timing of this election, it is just after Christmas, and politicians convey their Christmas greetings, through digital and print media; I also wonder if any of them know the true meaning of the religious festival or are just doing it for the emotional appeal.”

Citing certain examples, he said, “One candidate had released an audio CD comprising Christmas carols. Of course the candidate’s name and titles were prominent on the cover. Another party released a video on social media, greeting Catholics on Christmas. I am glad the Supreme Court has recently passed a judgment prohibiting the use of religion for canvassing in the elections. I do hope our priests follow this judgment or else it could be trouble for the Church.”

If the archdiocese of Goa issues a directive not to particularly endorse any candidate or party, then the priest is duty bound to carry out the directive as an act of holy obedience to his bishop. It is time for the Catholic Bishops Conference of India to issue guidelines to bishops and priests all over India, strictly prohibiting them from canvasing for candidates, failing which there could be serious repercussions.

12 thoughts on “CHURCH INFLUENCE ON POLLS”