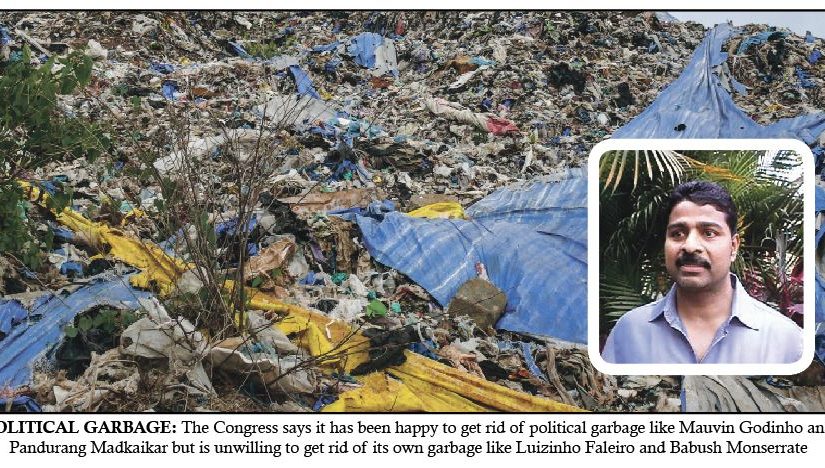 While voting on February 4, we should concentrate on getting rid of the accumulated political garbage in Goa instead of supporting the export from one party to another

The most asked question with an air of resignation, as if to suggest there isn’t a way, is ‘Is there a way out of this huge mess we find ourselves in vis-a vis the politicians, the inefficiency, the corruption, the lawlessness we don’t want and the many other services that should be available to us as ordinary citizens of this state and aren’t up to any reasonably good standard? Why should even an absolutely basic problem like the filth around us and the actual garbage not be solved for decades and reach ridiculous proportions?

TO ANSWER the question we must first ask the question: why are we in this mess? How have we reached this level of depravity? The easiest answer is to point fingers at everyone else except ourselves.

First let us accept this fact: It is we, each of us, who have stopped asking for things to be done correctly as is our right as citizens and tax payers. Another fact to remember is that all of us down to the poorest beggar are tax payers because everything we eat, drink, wear or use is taxed. Most citizens want someone else to ask that these things be done.

The government, which gets all its money from citizens, are meant to use this to give us our basic needs – law and order, protection, roads, electricity, water, garbage treatment, sewage, transportation, health care and more. For this, the government employs thousands of people in various departments. We all pay for and are therefore entitled to service from politicians and government employees, who have jobs with proper pay and perks thanks to the taxes we pay.

BUT we have stopped demanding our rights. We have, somewhere down the line, changed the equation so that it would seem that government funds come from some magical source, and that politicians are our new maharajas, the undisputed kings and queens for five years and they can arbitrarily decide whatever they want to do with this money. We feel we have to be grateful to them that they rule over us and this attitude percolates down to every government department and worker.

This brings us to what can we do now to correct the situation and put things in reasonably good order. For years we have believed that we would elect a new person to power and he/she would put everything right. Electing a new person or retaining the same old crook doesn’t seem to be working since all turn out to be irresponsible and do not attend to our needs. Why? Perhaps because we do not ask them as our right and not forcefully enough.

While accepting part of the blame for the mess we find ourselves in, let us not be too harsh on ourselves. We were and are duped at each election. We are told “Bring me to power, and I will put everything right.” We trust this person and / or party who sometimes may not be of our choice but who we feel is better than others in the fray.

Very often the choice is limited or no worthy person stands for election. And then for five years we are stuck with this person who came to our house or gave election speeches about being given a chance to serve our area as our representative. More often than not, year after year, election after election, our trust has been betrayed and we look once more for that new person/party who will do the job he/she is supposed to do – serve our area.

So what can we do differently that can get us the results we want. Here is a workable suggestion, which will take a lot of effort, but then we are doing it for ourselves, in our areas and for our future generations to benefit from.

TAKE the smallest election unit where you stay – a constituency’s voting booth area – consisting of around 600 to 700 people or 300 households. Basic needs are almost the same for all the area’s residents.

Form an area committee of around 10 dedicated people irrespective of political leanings in your area, where these capable citizens can deliberate on the data collected and draw up a wish list of what needs to be done there. Carry out a survey with each household and list out the problems, needs, suggestions, solutions and any other common objectives of the area. Have a meeting with those who can attend and get a common consensus on the document after discussions.

At the next election, approach each candidate ‘offering his/her services’ and get his/her commitment to fulfil the needs of your voting  area. Everyone who stands will agree before elections. Let people vote for whoever they think will do the job best.

As an area committee, do not participate in influencing the elections as far as choosing candidates or parties to vote for is concerned as individuals are welcome to do so. Of course, try and get the right people elected if you can.

But after the elections, call upon the elected candidate as a group and tell him/her to start on fulfilling these needs as promised. If necessary, gather a large number of people from your ward  at the house of the elected member – congratulate him/her and demand a time table for the jobs. Take him/her to all government departments and ministers concerned, and follow up until the jobs are taken up and completed according to your needs and satisfaction.

Keep a check on the quality of work done in your area and make sure timely repairs/maintenance is done. It will be a full-time job, but if shared, will not take all that much time from each one.

It will take persistent effort on part on the citizens, but then at least there is a good chance it will work. This is better than talking about work to be done all the time, participating in an election once in five years, and doing nothing else except blaming the government / politician / bureaucrats / government employees and everyone else except ourselves for the unholy mess we find around us.

Wake up, stand up and demand your rights. Keep at it until you get them and continue to be active so that it becomes a way of life. You are already doing it for your family. Now extend that to your community around your area – that is the only way we will get what we are owed by those elected to power and others employed for our services and paid from our taxes.

This is the way to ‘bachao your area and then area by area, village by village, town by town the whole of Goa.

This is the only way ahead. Let’s call it swarajya, or self-rule by taking responsibility for our own areas so our family and all citizens can lead a decent life as is due to us.