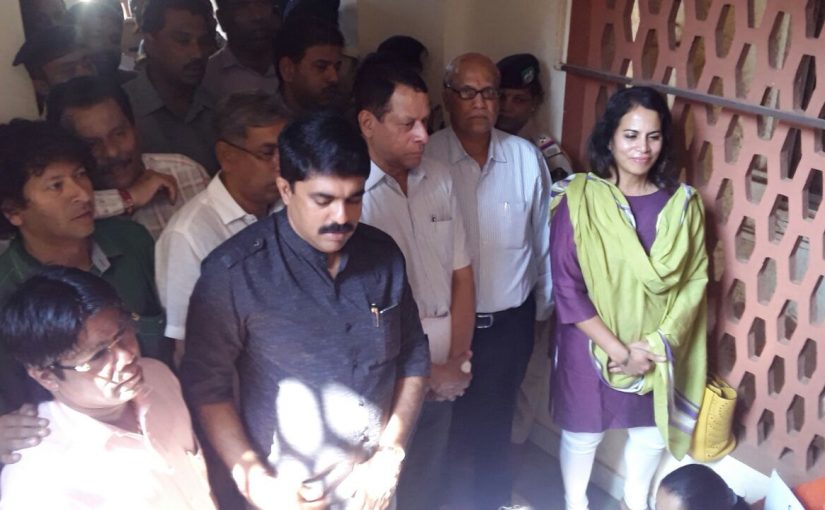 SAVE MARGAO, SAVE FATORDA: Hundreds of citizens marched to the South Goa Planning Development Authority office shouting slogans and waving placards to demand that the incomplete Outline Development of Margao should not be cleared in a haste. SGPDA chairman Mauvin Godinho, who is alleged to have received kickbacks amounting to over `50 crores from the real estate lobby, ran away from the office due to the public outrage. The people questioned whether this is the Bharatiya Janata Party’s deal for his entry to the party

THE Goa Forward Party (GFP) is making an urgent call for free and fair elections. In a letter written by its general secretary, it has urged the chief election commissioner in New Delhi to ensure a free, fair and level playing field for all political parties in the forthcoming Goa State Legislative Assembly. It draws the immediate attention of the chief election commissioner to all the populist schemes already announced and more being announced by the ruling Bharatiya Janata Party (BJP) on the eve of polls.

Needless to say, all these populist gifts being announced are with the obvious intention of wooing and influencing voters. This kind of canvassing for votes destroys the very principle of ensuring a level playing field for other political parties and candidates who do not want to enter into a competition in “bribing” the general public.

As the CEC is assessing the preparedness for the polls and finalising dates, the kind of announcements by the present government is vitiating the democratic process of free and fair conduct of elections. The ruling BJP is hastily taking decisions on critical issues when elections are barely two months away to circumvent the election code of conduct which the chief election commissioner has enunciated and invoked.

The GFP maintains that allowing the present ruling government, which should henceforth function as a “caretaker” in letter and spirit, to decide on key issues which have a significant bearing on the economy and lives of people, is highly unfair and unjust to all political parties and contesting candidates.

Chief secretary R K Srivastava, who was supposed to retire on September 30, 2016, has been granted an extension by the present government. The GFP opposes the extension as the same incumbent in the office of the chief secretary would be prejudicial to the interest of a fair elections. To maintain public confidence in the electoral process and ensure justice to all political parties, the GFP demands that R K Srivastava be immediately divested from his post as chief secretary.

The blatantly populist scheme, Goa Yuva Samwad Yojana, providing free internet, talk time, etc, has been rolled out by the government in the first week of December. At present, under the BJP party banner, youth are being mobilised for enrolment under the scheme. If this is not an abuse of a scheme by a party in power, what is it? In this respect, the GFP requests the intervention of the CEC and to put such political and electoral use and misuse of government infrastructure on hold until the general elections are over.

Interestingly, even the application forms pertaining to the aforementioned scheme are presently available only at BJP offices and to workers of the BJP, whereas elected representatives, including MLAs, belonging to other parties are deprived access to these forms. The GFP draws the attention of the CEC to the fact that the finalisation and declaration of Outline Development Plans (ODPs) for the cities/towns of Margao, Ponda, Mapusa, Panaji and Mormugao are in the pipeline.

The GFP has condemned these decisions of the present government at all available forums due to the following reasons:

In its appeal to the CEC, the GFP urges, in the interests of fair and just elections, directives to  government officials to desist from finalising and adopting the ODPs for towns/cities, these being critical development and planning issues which have a bearing on the health of the towns/cities for the next decade if not posterity. There is absolutely no reason for the BJP and its political executive to become a conduit for corruption and kickbacks, thereby derailing the process of free and fair elections.