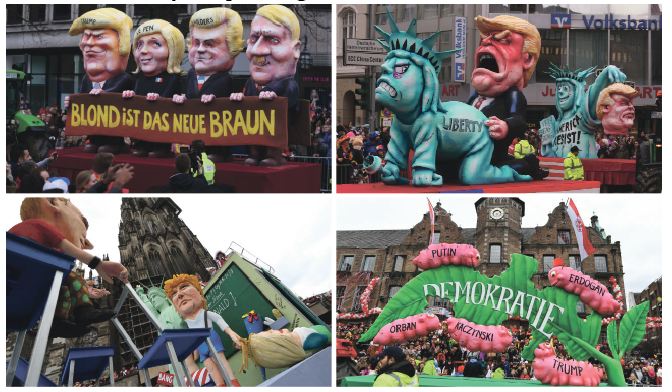 Ever since Donald Trump took over as president of the United States, the war between him and the media has intensified. Trump has called the media the ‘enemy of the people’ and they have retaliated by lampooning him at events like the Carnival

The floats at Karneval parades across southern and western Germany are known for their biting satire. This year, the main target of their derision was only ever going to be one man.

Carnival, known as die fünfte Jahreszeit (the fifth season) in German, is a time when the usual rules of polite society are thrown out the window. In the major cities of the Rhine region, the inhabitants become Narren (jesters) for a week, mocking the political establishment of the day with satirical floats which parade through the city centres.

The past 12 months have provided plenty of ammunition to the satirists.

In Düsseldorf, one of the central floats on Rosenmontag (Rose Monday) showed US president Donald Trump next to French presidential hopeful Marine Le Pen, Dutch far-right leader Geert Wilders and Adolf Hitler – all of them sporting carefully coiffed blond manes. The four populist leaders of past and present held a banner reading: “Blond is the new brown”.

The US leader’s relationship to the Green Goddess was also brought up in Cologne, where has was depicted groping the statue while pulling his election rival Hillary Clinton by the hair on his first day at school. Awaiting him as his classroom buddy was Russian president Vladimir Putin.

In Mainz, he was depicted as an elephant crashing through crockery. The sign on the float read Trumpel-tier, a pun on the word for a two-humped camel Trampeltier. The word (literally: lumbering animal) is also an insult meaning klotz or clumsy person.

In a piece of quite literally biting satire, Trump was portrayed, along with Vladimir Putin, Turkish president Recep Tayyip Erdogan and the leaders of Poland and Hungary, as a caterpillar munching away at the leaf of democracy.

But Trump wasn’t the only leader to invite the scorn of the Karneval Narren. Theresa May, prime minister of the United Kingdom, was shown pointing a pistol through her own teeth inscribed with the word Brexit.

Erdogan, who has been accused of human rights abuses after imprisoning thousands of people following an attempted coup in July 2016, was shown screaming “terrorist” at a clown in Düsseldorf