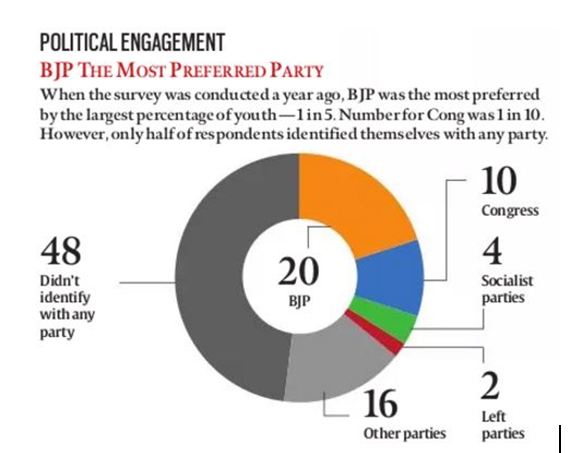 ‘NOTA’ GENERATION: While the BJP is the most preferred party, almost half the respondents are not aligned to any party

A survey carried out by  the CSDS in partnership with KAS found that 1/3rd of India which is below the age of 25 is against higher studies for women, women wearing jeans and believes that a man should be the boss, both at home and the work place

Out of India’s 1.25 billion people, 65 per cent are aged 35 and under, and about half the total population is yet to turn 25. What is in the mind of this unmatched youth demographic?

A year ago, the Centre for the Study of Developing Societies (CSDS) in partnership with Konrad Adenauer Stiftung (KAS) conducted a sample survey-based study that sought to answer key questions about how India’s youth thought and lived. The respondents were aged 15-34, and interviews were conducted across the country. The resultant publication, “Findings of the Attitudes, Anxieties and Aspirations of India’s Youth: Changing Patterns”, was released in New Delhi on April 3, 2017.

Comparing these findings with those of an earlier CSDS-KAS survey conducted in 2007 allows the tracking of attitudinal change over a decade in which the youth population rose significantly, and India went through major economic, political, socio-cultural and technological transformation. Some key findings:

Socially and culturally, Indian youth are yet to let go of conservative moorings. 41 per cent agree, in varying degrees, that married women should not work, 43 per cent believe men are better leaders, and 51 per cent think wives should always listen to their husbands. One in four approved of same-sex romantic relationships. 27 per cent expressed at least some unease about having a neighbour who cooked non-vegetarian food, 22 per cent about a neighbour from a different religion, 26 per cent about an African neighbour, and a huge 47 per cent about being neighbours with an unmarried boy and girl living together.

Three out of five youths are fond of wearing stylish clothes and footwear, and carrying the latest mobile phones. 39 per cent are very fond or somewhat fond of applying fairness creams.

58 per cent are non-vegetarians; this is about the same proportion that had described themselves as non-vegetarian in a CSDS survey in 2006.

This is a highly anxious generation, weighed down by worry and stress. 78 per cent of 18-25-year-olds worried about employment; among 15-17-year-olds, the biggest worry for the largest number (83 per cent) was education. In the hierarchy of worries, parents’ health topped all age groups; harassment/teasing came last for 15-34-year-olds. In general, urban youth were more anxious, as were youth with higher economic status and better education.

A note on the survey

The study was conducted among 6,122 individuals between ages 15 and 34 by CSDS in partnership with KAS in 19 Indian states during April and May, 2016. Sanjay Kumar was the principal investigator, and Suhas Palshikar and Sandeep Shastri were on the Advisory Committee. Palshikar and Kumar are regular contributors to The Indian Express. Lokniti is a programme at CSDS for the study of comparative democracy. Launched in 1997, Lokniti is known for its National Election Studies, and a broad range of non-election studies of public opinion, including Democracy in South Asia (2006, 2017), State of Nation Surveys (2009-11), and Farmers’ Study (2013). To mark its 20th year, Lokniti released the report on “Attitudes, Anxieties and Aspirations of India’s Youth: Changing Patterns” on April 3, and another on “Society & Politics Between Elections” on April 4.