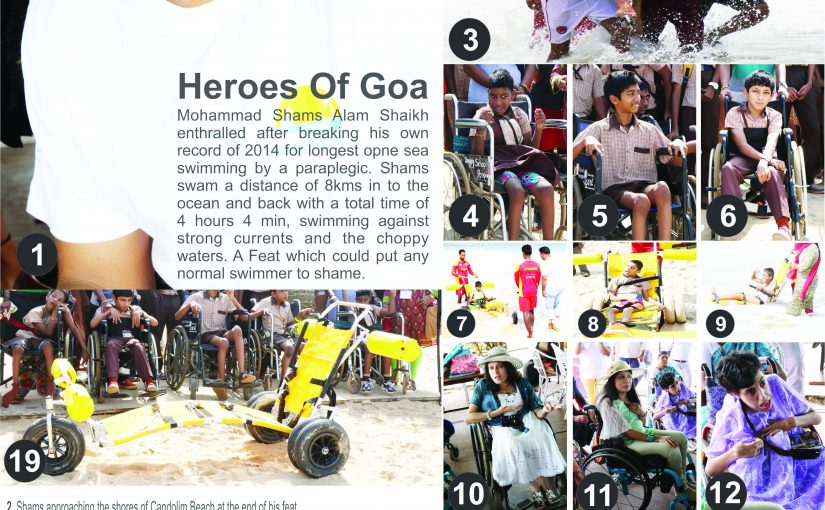 Mohammad Shams Alam Shaikh enthralled after breaking his own record of 2014 for longest open sea swimming by a paraplegic. Shams swam a distance of eight kms in to the ocean and back with a total time of four hours four minutes, swimming against strong currents and the choppy waters. A feat which would put any normal swimmer to shame.

YOU better believe it – given moral support, many handicapped people can be champions. Mumbaikar Mohammad Shams Aalam Shaikh proves over and over again that he can swim and how! Take him from his wheelchair and put him into the sea and he swims to break records. Here’s one boy, no, he’s a man touching 30 years now, who loves to break records.

Shams, as he is known, is one of the wheelchair-bound tourists in Goa for the week-long Wheelchair Accessible Beach Festival, organised by UMOJA, which kicked off at Candolim beach from March 31, 2017.  An estimated 1,000 wheelchair-bound tourists registered from Mumbai, Hyderabad, Bangalore, Chennai and Goa of course. They wanted to have some fun of the beachside kind like other people, including swimming, like our hero here.

Shams is a champion swimmer and proved it by swimming eight kms in the open sea along the Sinquerim-Baga-Candolim northern beachside belt – and he did it in four hours, four minutes – leaving everyone cheering and full of praise and admiration. Perhaps he’ll make it to the Limca Book of Records, Asian Book of Records and the Guiness World Records. The thought keeps him alive and happy.

This is to say the differently-abled  have minds, dreams, and ambitions, just like everybody else. All they need is a little help of the software and hardware kind. This group of go-getters at the beach festival could inspire us – the ordinarily normal – when we’re down in the dumps! Take a leaf out of their book if you wish.

A photo essay on all the heroes of the beachside, many of them children from the Sanjay School in Porvorim….