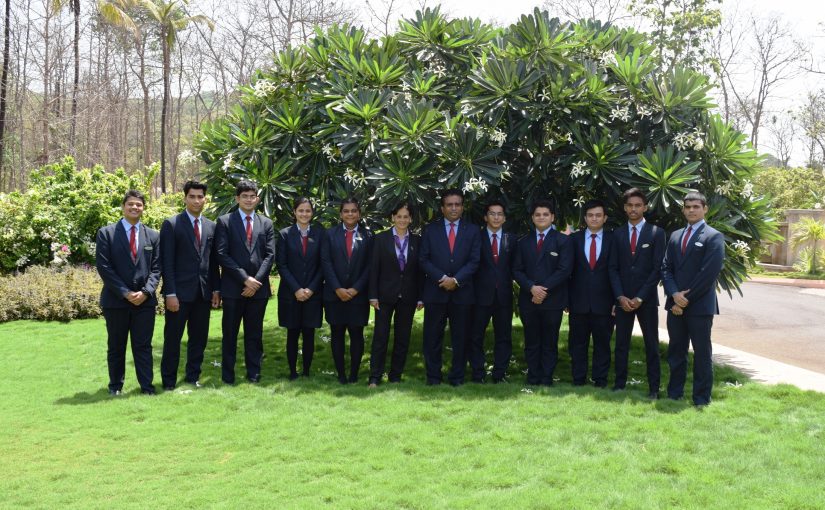 ADVENTURE CALLING: 10 outstanding students of V. M. Salgaocar Institute of International Hospitality Education (VMSIIHE) are gearing up to embark on a month long culinary adventure to Portugal as a part of a knowledge exchange program. The initiative stems from a MOU signed recently with Turismo de Portugal when the Hon’ble Prime Minister of Portugal, António Costa, was in Goa on a state visit. This exciting exchange programme will see collaboration in the fields of research, trainings, teaching-learning methods and other aspects over the next two years. The students will be accompanied by Martha Rebello, Academic Coordinator and Compliance Officer, VMSIIHE. The group will have an academic experience which will include lectures, master-classes by experts, visits to culinary institutes, and even wine appreciation sessions! The delegation will be hosted at the Escola do Turismo de Portugal located in the beautiful coastal town of Douro Lamego. VMSIIHE will be hosting a similar delegation of students and faculty members from Portugal at their campus in Raia during the academic year

TO EVERYONE’S surprise one of the most inefficient and extremely incompetent officer of the Goa Administration, Sanjeev Gauns Dessai, has been appointed to the all important and sensitive post of Director of Vigilance.

This is more surprising because Dessai, the former director of tourism along with his former tourism minister, Dilip Parulekar, are under the scanner of the Goa Lokayukta in the infamous multi-crore beach cleaning scam. Ironically the Directorate of Vigilance is the nodel office for the Lokayukta.

Desai joined as Director of Vigilance and has reportedly decided to go on 40 days long leave. Obviously to make merry on those ill-gotten kickbacks he pocketed as Director of Tourism from that multi-crore beach cleaning scam. As Tourism Director, he travelled the world at tax payers’ expense under the guise of promoting Tourism while allowing our pristine beaches to go for a six and be ruined with garbage mounting all over and even being burnt on the beaches. Desai should in fact seek VRS or go on permanent leave, saving our Goa from a nasty eyesore.

And in a further serious administrative anomaly, the current additional  director of vigilance, Rushi Redkar is very much senior to Dessai. Will Chief Minister Parrikar rectify  this grubby state of affairs as zero tolerance to corruption and good governance is what we were promised?

If Manohar Parrikar wants to weed out the deadwood that has crept in the bureaucracy, Sanjeev Gauns Dessai could be the starting point.

WHILE I am happy to learn that `128 crore has come into the coffers of Smart City Mission, AMRUT, and that Panaji MLA Sidharth Kunkalienkar is going to spend some of the money to legalize shanty colonies living on the edges of the St Inez creek (now a perennially ganda nallah) – perhaps someone should remind him that the St Inez creek is the age-old time-tested drainage system from the foothills of the Altinho to the river Mandovi.

No development, however smart, will work if cleaning up and restoration of the St Inez Creek is not central to it. The creek is the fulcrum/anchor of the city as its migrant population grows and slums and small businesses thrive on its unprotected banks. One of the reasons why Panjim-turning-into-city (like Mumbai) has degenerated is because its cardinal drainage systems have never been respected by post-Liberation aya ram, gaya ram governments!

If the St Inez Creek is not central to sanitation and protection of primary natural infrastructure, whatever else our honourable Panjim MLA does will be merely cosmetic (even if it reaps migrant vote banks for the government of the day). The St Inez ganda nallah will continue to fester as long as it hosts all kinds of deadly vermin to strike citizens down with malaria and ill-health and squalor will continue to pile up as real estate continues to boom legally and illegally. The horrors of the  ganda nallah will invite flooding and continue to turn life into a nightmare for old as well as new citizens of Panjim.

It is necessary that encroachments by St Inez creek are removed and a legal demarcation space maintained to stop migrants and real estate developers from destroying Panjim irrevocably. Anyone throwing garbage or sewage into the creek should also be stiffly fined for polluting and contaminating the city’s heritage drainage creek. Only the restoration of this one-time beautiful creek of water will define how smartly all the new funds are used!

LEADERS of rabidly communal groups are instigating our peace-loving Goan Hindus to play cow-politics and spread the communal virus! They want to stop minorities from consuming beef completely even if it means violence and without the government’s support in the next couple of months. These communal groups want to ban beef toto in defence of their religion and all the holy cows of India. Who has given these fanatics the right to impose personal religious beliefs and attack the eating habits of other communities? They are distorting Hinduism in a peaceful state like Goa.

This whole campaign is being well-planned by communal groups with the active support of the ruling government at the Centre and Goa, to slowly taka away the fundamental rights of minorities and make them into second and third class citizens of India – it is their long cherished dream to turn this country into their version of Taliban-type Hindu rashtra.

Such dirty Hindutva politics in collaboration with goons of the right wing organizations to polarize Goans/Indians is no different from the jihaadi or terrorist movements elsewhere in the world. They use religious sentiment as a silly excuse to engineer hatred and killing – it is nothing to do with defending religion.

Indians should seriously work towards eradicating hunger, poverty, unemployment, slum-living on a priority basis and take the nation forward into a happy future instead of backward with stupid issues like beef ban, conversion, love jihad, etc that divides the community for political gains. All Indians are equal and guaranteed their fundamental freedom to life, religion, customs, traditions in the Constitution. India is not the private property of one community but a sacred home for all communities living here irrespective of caste, creed and religion.

So down with dictatorship, distorted religious madness to break up this country and destroy it in the long run. Let us behave like civilized human beings and not encourage a return to the dark ages courtesy religious goons!