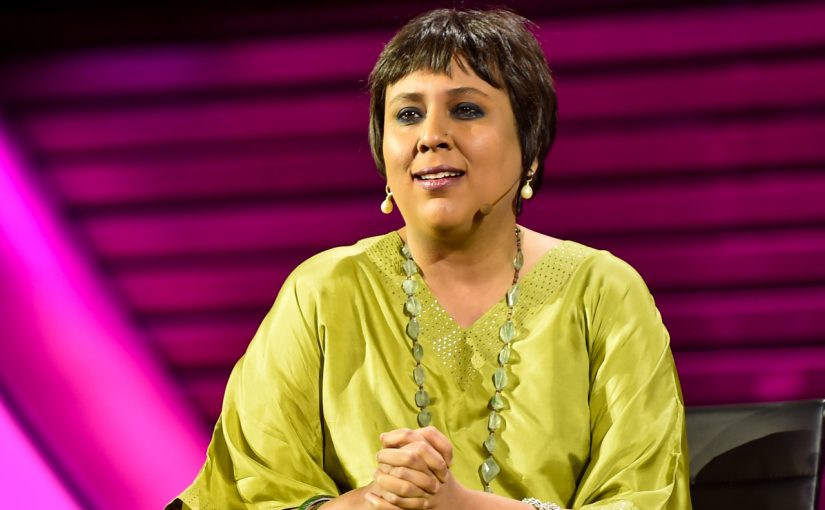 VICTIM: Former NDTV group editor, Barkha Dutt, is one of the high profile victims of the Narendra Modi government. NDTV was forced to sack her if they wanted advertising

Barkha Dutt the former high profile anchor of NDTV has been the subject of vicious abuse by the bhakts of the Modi Government. She has also been called a ‘presstitute’ and told to go to Pakistan. With her critics labelling her anti-national and pro-Muslim, and her supporters pointing to her brave coverage of the Kargil conflict and the fact that she was awarded the Padma Shri for her coverage of the 2004 tsunami, she remains one of India’s most famous and controversial journalists

I HAVE been called a whore, a ‘randi’, ‘c***”, bitch and ‘presstitute” on Twitter and other social media platforms so often that now I barely notice it. It is not unusual for me to get tweets that go like this: “Tum agar randi bhi ban jaogi, phir bhi tujhe koi nahi ch*****” (even if you become a prostitute, no one will have sex with you). My mobile number has been shared publicly on multiple online platforms urging people to send me abusive and threatening messages.

I have been married off to men who either don’t exist or who do but have had no romantic connection to me. Even my Wikipedia profile is routinely edited (despite formal complaints to them) to describe me as married to these men. The tweets about my fictional husbands have underlined that the men were Muslim by way of explaining my secularism — which, of course, is a word used as a slur. When I started publicly rebutting the rumours, with anger, humour and exasperation, the internet entries were amended to say I was “twice divorced.”

Falsehoods aside, why isn’t anyone discussing the marriages, divorces, and affairs of my male colleagues? Why the fixation with my private life? Because, the public scrutiny of women — and especially those of us who are proudly ambitious and fiercely independent — is very different from the standards used to measure men. And the subtext is always sexual. How you look, what you weigh, your sexual morality, and the men in your life — or the lack thereof. It is within these contours that they, the lynch mobs of the virtual world, come hunting in packs for the women they disapprove of. There are females among the assaulters too because misogyny is the one thing that truly is gender-neutral. “Presstitute”, that insult of choice online, is a gendered smear, no matter which way you slice it. Quite aside of the debate it raises about how you view sex-workers, the very origin of the affront seeks to link integrity and sexuality.

And no, there is nothing that is considered beyond the pale of decency. When I decided to go public about my experience with child sexual abuse — a choice which for every woman is first a battle with your own demons — among the gems in the reactions from my social media trolIs, was this.

“Barka Dutt ‘tujhe to meri gali ka kutta bhi na dekhe, mardon ki to baat hi chhod de’ (Even the dog in the alley behind my house wouldn’t look at you, forget about men). Even in this age when some live in a make-believe world of post-feminism, molestation was repeatedly linked to desire and not the coarse abuse of power that it is. And then there was also this. “Every feminist has a rape fantasy nowadays, it’s so easy and cheap to get popular.”

While on the subject, rape threats to women are startlingly commonplace on social media. Once again, we forget that rape is a weapon of mass control; an age-old atavistic assertion of male power. It has nothing to do with sex, other than to use it as a vehicle of abuse. Yet, on forums like Twitter, rape threats are treated like a privilege bestowed on you. If you remain silent, you are complicit in normalising it; if you call them out — as I have several times — you are once again told as I was: “Who would rape you?”

Yet, not just are we required to have “skins as thick as that of a rhinoceros” — as Hillary Clinton once told me — we are expected to not even protest, because to do so is apparently to play victim. And as tough women, God forbid if we ever come across as whiny! So even though we can see that the trolling for us is sexually abusive in language and patently violent in thought, we have internalised it, as a sign of the times.

I did try the route of a criminal complaint once after being stalked and abused on WhatsApp groups and cold- called because my number was shared widely on social media. A man, using proxy servers, would call several times a day, sometimes with a group of men also cackling and sneering into the phone and threaten to rape and kill me. I appeared dutifully before a Delhi magistrate. I was provided security for a short while. No one was ever able to crack the case.

Frankly, now, trolling has become part of my daily life. I don’t even notice it any more; that’s how dangerously inured I have become to the gross innuendo and violent and sexually explicit abuse that is heaped on so many women. But this is so wrong. And our silence — my silence, my numbed weary acceptance of it or even my defiant engagement with it — is a disservice to all our women. Because in the end, trolling is a modern-day weapon of patriarchs; an attempt to control, intimidate and eventually silence women, all of us who think for ourselves.

Barkha Dutt is an award-winning journalist and author. This piece is part of HT’s new campaign, Let’s Talk About Trolls, which focuses sharp attention on online abuse and bullying.