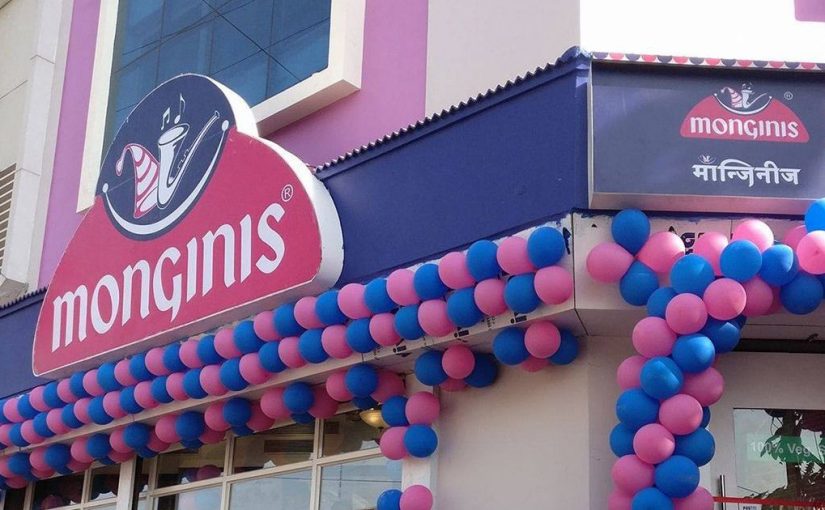 CHANGING TIMES: From a fascist sympathizer to a devout Muslim, the ownership of Monginis has come a long way

The Monginis franchise holder in Goa, Datta Naik, is staunch anti-fascist and the present owner Korakiwala is a devout Muslim who does not permit the use of daaru in the cake – a far cry from L.U Mongini, one of the founding brothers of the company, who was an admirer of the Italian dictator Mussolini

Did you know that Monginis, the iconic Indian cake shop, was founded in Bombay in 1902 by two Italian brothers? A hundred years ago around this time of year, the Mongini brothers would be wrapping up their elaborate Easter Bazaar at their store on Churchgate Street in Bombay.

Discovering an unexplored private archive is many a historian’s dream. In July 2016, a friend in Mumbai, Simin Patel, opened the doors of a treasure trove for me – her family’s trunk of old papers, postcards, picture books and assorted memorabilia. Among the first things in that trunk to catch my eye was an old box from Mongini Ltd.

Though I have grown up on a steady diet of Monginis birthday cakes for several years of my life, it never occurred to me to think that not only might the name Monginis be of Italian origin, but also that the company might be more than a hundred years old!

So I racked through old articles of the Times of India to learn more about the company. Turns out that in 1902, Messrs Mongini opened their restaurant and confectionery on Churchgate Street in Bombay as Mongini Ltd. In 1919, following a widening of Churchgate Street, they reopened their new and larger building as the Mongini Brothers. The Times of India of March 21, 1919, reported that “Messrs Mongini’s building will prove a valuable addition to the palatial business establishments of the city. The ground floor will be used as refreshment room and confectionery. The dining room will be located on the first floor. Whilst the 2nd floor may be reserved and arrangements made for wedding receptions, dinner parties, presentation ceremonies and so on.”

So not only was Mongini’s famous for its cakes, it was also a place for Bombay’s European and later Indian elite to have dinner while listening to classical music, hold meetings, book clubs and all manner of cultural and business soirees. In the 1930s, Mongini’s became quite famous for its Hungarian orchestra, directed by Laszlo Szabo and played by Hungarian musicians. There were concerts on Tuesdays, dinner dances on Fridays and Saturdays and, as the Times of India said, Mongini’s was quite the “favoured haunt at afternoon and evening of the city’s socialites, intelligentsia and business bosses”. The chocolates and cakes were, of course, special, particularly on the occasion of the annual Easter and Christmas Bazaars. Several Times of India articles describe the crackers and chocolates of all sizes and descriptions piled high, alongside sweets both freshly made and imported like marrons, crystallised fruit, sugar-coated almonds, caramels, toffees, wafers, Easter eggs, gauzy butterflies and black cats for table decorations, and the bakery making fresh Christmas cakes to be sent all over India.

What is less known perhaps is that L.U Mongini, one of the founding brothers of the company, was a proud fascist who wrote several letters to the Times of India praising “the immense services rendered by Mussolini to Italy” and explaining how “fascism [had] saved Italy” from the disaster that was Communism in his opinion. Mongini was a member of the Bombay Presidency Trades Association, consul for the Italian Touring Club of Bombay (which seems to have promoted tourism in Italy), and director of the Fascism centre in Bombay founded in 1925.

WHILE debating the benefits of fascism with another reader of the newspaper, he wrote quite frankly, “If on the one hand Fascism insists on discipline and places restrictions on so-called liberty, on the other hand it creates order and economic balance in the State.” He had no qualms admitting that fascism curtailed the freedom of the press, freedom of assembly and the right to strike, because it protected the regime from sedition and defamation by giving it a “firm strong hand”. Besides, fascism for him was more than just a party, it “[identified] itself with the nation… It [was] the Italian nation itself”.

Though none of the letters by L.U Mongini to the press on the subject of fascism ever mentioned Mongini Ltd, we know that it is the same Mongini because the address from which he signed his letters was that of the shop (45 Church Gate Street). Thus, the man who supplied sweet delights to elites all over India and Bombay was also the man who thought Mussolini and a “strong regime” were the answer to Italy’s troubles. Following the turns of history and the outcome of the Second World War, fascism and Mussolini may no longer be things to be openly proud of. But there was a time when even moderates thought Mussolini had made great contributions to Italy, as even the man debating with Mongini over fascism conceded. For Mongini, and many others of his time, these were all things to take pride in – the strength and supremacy of the nation, the squashing of all criticism of fascist violence as “defamation” and “seditious propaganda”, and abolishing civil and workers liberties to strengthen “the Kingdom of Fascism and its Duce”.

Monginis no longer has anything to do with Italy or Fascism of course. Ownership passed to Indian hands and the brothers left the country at the time of Independence. But, as you buy your next chocolate cake or eat an Easter egg anywhere in the world this season, it’s worth wondering – do you know people who believe in similar things today? And if so, who are the Il Duces of our times?