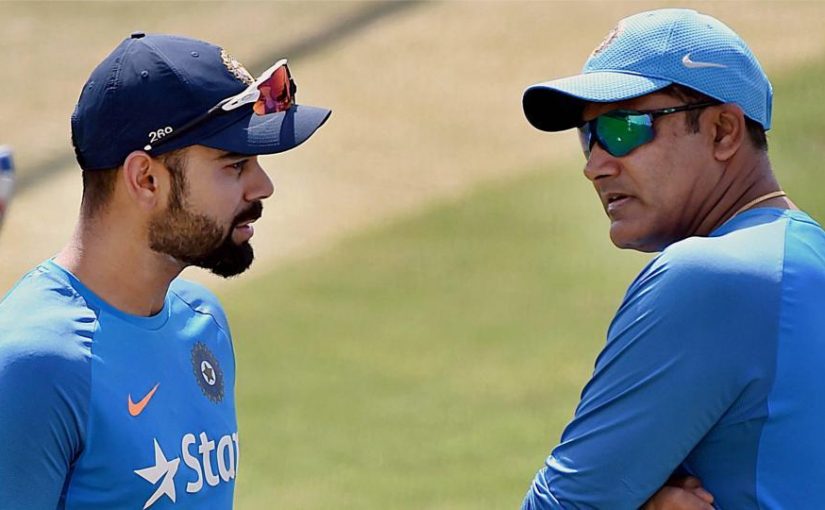 ADAMANT: Kohli is insisting that the contract of the coach Anil Kumble should not be renewed

RAMACHANDRA Guha, the prominent historian who stepped down from the Supreme Court-appointed committee of administrators (CoA), has left with a scathing resignation letter that expresses frustration with inaction over conflicts of interest, superstar culture, and poor treatment of domestic players who don’t play IPL, among other issues.

“It has been clear for some time now that my thoughts and views are adjacent to, and sometimes at odds with, the direction the Committee is taking as a whole,” Guha wrote.

Here is a summary of Guha’s concerns:

Guha was unhappy with the system where national coaches are contracted for 10 months a year and then go away for IPL duty. Rahul Dravid, R Sridhar, Sanjay Bangar and Bharat Arun are examples of coaches who are, or have been, part of the support staff of both national teams and IPL franchises.

Guha also alleged preferential treatment when it came to awarding these contracts. “The more famous the former player-turned-coach, the more likely was the BCCI to allow him to draft his own contract that left loopholes that he exploited to dodge the conflict of interest issue,” he wrote. “I had first raised this issue to my COA colleagues in an email of February 1, and have raised it several times since. I had urged that coaches and support staff for national teams be paid an enhanced compensation, but that this conflict of interest be stopped.”

Guha went on to mention an NCA camp where at least one national coach was not available because of IPL duties.

Guha said Sunil Gavaskar was a BCCI-contracted commentator and the director of PMG, a player management company, which has Shikhar Dhawan, Rishabh Pant and Sarfaraz Khan on its rolls.

“Sunil Gavaskar is head of a company which represents Indian cricketers while commenting on those cricketers as part of the BCCI TV commentary panel,” Guha had written to his colleagues on March 19. “This is a clear conflict of interest. Either he must step down/withdraw himself from PMG completely or stop being a commentator for BCCI.”

Without naming possibly Sourav Ganguly, Guha wrote: “One famous former cricketer is contracted by media houses to comment on active players while serving as president of his State Association.”

EVEN though the new contracts rewarded Cheteshwar Pujara’s Test performances, Guha also noted: “As you will recall, I had pointed out that awarding MS Dhoni an ‘A’ contract when he had explicitly ruled himself out from all Test matches was indefensible on cricketing grounds, and sends absolutely the wrong message.”

IN ALL likelihood, India’s coach Kumble will not get an extension of his contract even though India have won every series bar one — a rain-affected T20 dash against West Indies in USA — under his watch. The reason being given by BCCI officials is that Kumble has lost the trust of the captain Kohli. The news broke a day after Kumble made a presentation for better contracts for all stakeholders.

“Kumble was left hanging, and then told the post would be re-advertised afresh,” Guha wrote. “Clearly, the issue has been handled in an extremely insensitive and unprofessional manner by the BCCI CEO and the BCCI office-bearers, with the COA, by its silence and inaction, unfortunately being complicit in this regard.”

Guha questioned the timing and intent of the advertisement for the coaching job. “If indeed the captain and the Head Coach were not getting along, why was not this attended to as soon as the Australia series was over in late March?

“Surely giving senior players the impression that they may have a veto power over the coach is another example of superstar culture gone berserk?”

DOMESTIC cricketers end up making about `1.4 lakh for a Ranji Trophy match, but they are paid only `10,000 up-front. The balance is often delayed.

“There are many more Indian cricketers who make their living via the Ranji Trophy than via IPL; besides, for us to have a consistently strong Test team (especially overseas) we need a robust inter-state competition and therefore must seek to compensate domestic players betters,” Guha wrote. “And yet, shockingly, Ranji match fees have remained at a very low level (a mere `30,000 odd for each day of play); moreover, cheques for match fees sent by the BCCI are sometimes not passed on by the state associations to the players.”

GUHA did not spare the CoA for its inaction until the last minute when the BCCI delayed the team selection for the Champions Trophy because they were unhappy with the outcomes of the ICC meetings.

The BCCI meetings that decided this course of action were attended by disqualified officials such as N Srinivasan and Niranjan Shah. “All these illegalities were widely reported in the press; yet the COA did not bring them to the notice of the Court, and did not issue clear directions asking the offenders to desist either,” Guha wrote.

OUT OF THE loop

IN PERHAPS the most damning indictment of the CoA, Guha accused the committee of changing its lawyer without informing him. “There were several crucial decisions made where all the COA members were not brought into the loop,” Guha said. “For instance, a capable, non-political Senior Counsel representing the COA and the BCCI in the Supreme Court was abruptly replaced by another Senior Counsel who is a party politician.”

GUHA said he believed CoA’s inaction was down to the absence of a senior male cricketer in the committee. He said he had suggested the names of Bishan Bedi and S Venkataraghavan to the committee, but both of them were disqualified by the virtue of their age over 70. He then suggested the name of Javagal Srinath, but this was not acted upon. He ended the letter saying he hoped he would be replaced by a senior male cricketer