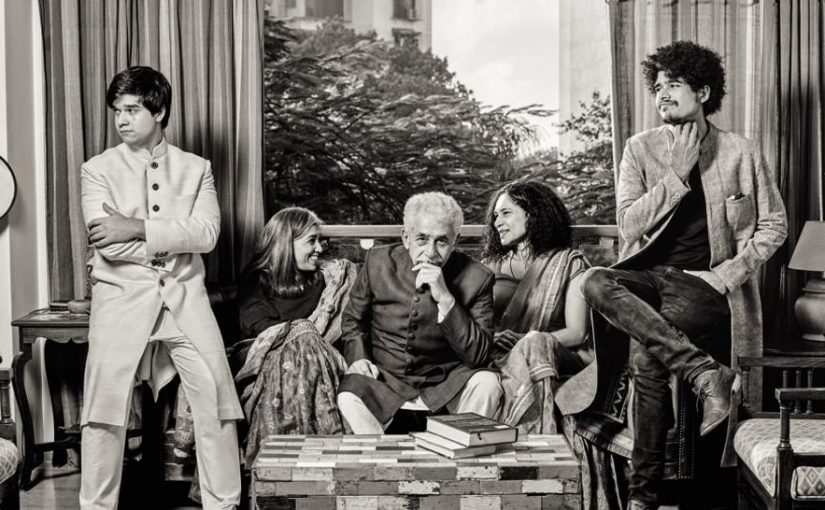 SYMBOL: The family of Naseeruddin Shah is itself a symbol of secularism as he is married to Ratna Pathak, an equally versatile actress, who shares his commitment to freedom of expression

In the last of a series of essays he wrote for the Hindustan Times, the famous actor NASEERUDDIN SHAH questioned the presumption that Muslims in the country are unpatriotic and cannot be trusted

It is believed that the first sound entering a new-born Muslim’s ears should be the Azaan or the Kalma. Either one must have been the first sound I heard too, though, of course, I have no memory of it now.

Even though I am no longer a practising Muslim, and in fact had never been overly aware of a Muslim identity, the sentimental urge that made me perform this rite for my children as well did not seem paradoxical. My wife Ratna is Hindu, and we were married much before the term ‘love jihad’ was coined and acted upon. She and I both have no more than a ritualistic connection with our respective religions. Eid and Diwali are joyous occasions for us and we celebrate both with equal gusto — so our disparate religious upbringings didn’t merit a thought.

The first tricky moment was our decision to not fill in the column asking ‘religion’ at the time of our childrens’ school admission. Apart from objecting to this in principle, we averred that we genuinely had no idea what their religion was at that time or what it would be later. Not considering a religious education of any kind necessary, we had decided to leave the choice of faith to them. Religion never played a major part in my life anyway and my attempts to be what was called a ‘true muslim’ ended when I was about twenty. I abandoned religion then and have never felt the need for it; Richard Dawkin‘s statement that religion has “nothing whatever to do with goodness” does not need any verification when one looks at what’s happening everywhere in the name of religion.

MY RELIGIOUS education began at the age of five with learning the Arabic alphabet and being subjected to the Maulvi’s ignorant garbage about planets moving around the earth, which of course was not only “flat, and the centre of the universe but to believe it moves round and round is heresy!” I was also persuaded that not only were Muslim men obliged to grow beards (no beards in my family, so I did wonder whether we WERE good Muslims at all!) and wear slightly short trousers, but we belonged to the one and only true faith and were all heaven-bound no matter how we conducted our lives whereas everyone else… ^*#@#! My best friend K.C. Singh burning in hell for eternity was a thought I couldn’t stomach even then.

Questioning the Maulvi was frowned upon so I quietly took whatever I could from the Arabic recitation in terms of diction and breath control and let the rest of it go. Why should someone be punished for his doubts or for no fault of his, and, moreover, why did a being as great as Allah need to be appeased all the time? It just didn’t make sense even at that age.

When Ratna and I decided to marry, discussing conversion and anticipating the social problems we might have couldn’t have been further from our minds. But over the past few years, the nightmarish possibility of my children being someday confronted by a mob demanding to know their religion could be inching closer to reality.

NEVER before in our country have rational statements of concern and pleas for peace, not only from Muslims, been interpreted as cowardly or seditious. It is almost as if the day was being awaited when this could be done.

A Facebook post quoting Einstein’s warning about nuclear warfare received a few likes but the fair share of abuse and vilification of Islam it also got stumped me. I was even warned “not to poke your nose in matters that don’t concern you”! That the survival of the human race does not concern me was indeed news. Evidently, as a Muslim, it should not be my concern to urge India and Pakistan not to hurt each other and if I did I was pro-Pak, “because we are going to bomb the shit out of them” proclaimed one desi troll whose ideal obviously is the Donald.

Like all children growing up in India post-partition, I heard horror stories of “them” just as “they” certainly heard identical ones about “us”. The supposed savagery of the Sikhs was much mentioned, but I don’t think I ever connected those deeds with the Sikh and Hindu friends I had, and I know the feeling was reciprocal. These acts of depravity were committed by unnamed villains not real people, we all thought; incidentally the longest lasting, dearest friends I have had in my life have been mostly Sikhs, and considering the extreme bloodletting between Sikhs and Muslims at partition, doesn’t it say something about subsequent political machinations that those two communities have never been at each other’s throats again? The puerile religious taunts schoolchildren unthinkingly tossed around then were never venomous enough to even warrant fisticuffs but these nebulous aversions seem to have crystallised over time and found their targets — each other.

The hatred spawned by partition taking seventy years to unleash itself is probably evidence that the longer the pot brewed the more potent the venom got. I cannot, from my lifetime, recall a period when Muslims were suspected en masse of being unpatriotic and required to explain themselves. The sins of the few have been visited on us all.

Undeniable though it is, that many Indian Muslims misguidedly consider Pakistan their haven, the immeasurably greater number who take intense pride in being Indian and who connect deeply with the country are hurt and angered at our patriotism being under scrutiny. This political ploy of labelling us outsiders will be abandoned when it has outlived its usefulness of course, but what might happen in the interim is another matter.

The visible increase in the sight of saffron scarves and tilaks, as well as on the other side beards, hijabs and topi, in a country where barely ten years ago in most states (Maharashtra, Bengal, Kerala to name only three) Hindus were indistinguishable from Muslims, is cause for apprehension, but this assertion of the club you belong to and the waving of its flag was waiting to happen.

It seems essential for Muslims in India to get over the feeling of victimisation they are in now; it is a trap all too easy to stumble into – we must determine to stop feeling persecuted, all evidence to the contrary notwithstanding; we must stop hoping for salvation from somewhere and take matters into our own hands — not least of all to take pride in our Indian-ness and assert our claim on our country.

Indian Muslims’ indifference, particularly among the economically weaker sections, to education or hygiene need not be reiterated nor the fact that they have no one but themselves to blame for these ills. Granted, patriotism is not a tonic that can be forced down peoples’ throats.

But till the length of Sania Mirza’s skirt causes more agitation than the lack of modern education and employment opportunities for our community, as long as we hesitate to condemn the sadistic madness of the ISIS (that we haven’t heard too many Hindu voices condemn the lynching of innocent Muslims by gaurakshaks is immaterial), so long as we continue to spawn ‘believers’ without giving a thought to their upbringing, or continue to dilly-dally on the removal of an outdated heavily misogynistic tradition, we only help reinforce the belief so easily held that we support or at least condone violence and regression.

The saffron brigade did not have to rack their brains to come up with the idea of evoking and lambasting tyrannical invaders of hundreds of years ago to illustrate “the harm Muslim rule did to the country”.

They only had to revive the moth-eaten allegation with conviction enough to make a case for sentencing us Indian Muslims to the rank of second class citizens. We “the invaders’ descendants”, albeit with plenty of indigenous blood in us, many generations later, need to make reparation for our supposed ancestors’ misdeeds.

Islam too has never been in greater need of reform and enlightened interpretation than it is now, though considering that fundamentalists currently rule the roost everywhere, that’s probably not a smart thing to say.

But it is time for Muslims to throw the caretakers of religion out and form their own beliefs based on an understanding of what their holy book actually says.

Nowhere else perhaps is the Quran recited so much and understood so little as in India. Muslims and Hindus both today need to start speaking for themselves and not buy into the harangues of narrow minded bigots and self-appointed spokesmen who condemn Yoga as anti-Islamic and those who consider equating Surya Namaskar with Namaaz as insulting to Hinduism.

A depressing indicator of the extent of the divisiveness eating into us today is the fact that not too long ago on a quiz show, not one of the contestants got the answer to “Who wrote ‘saare jahan se achchca Hindustan hamara’” right, and the fact that it was a Muslim astonished not a few of them.