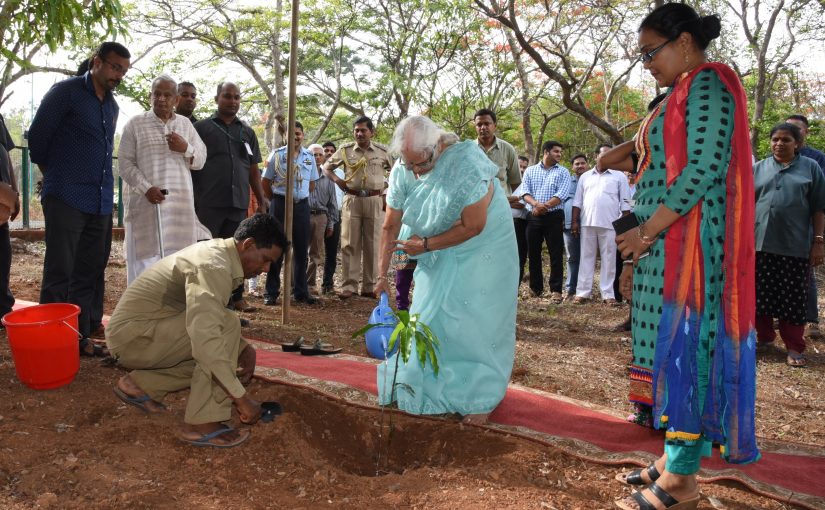 IT’S A MANGO TREE FOR GOA GOVERNOR MRIDULA SINHA: It was World Environment Day on June 5, when politicians of various denomination ceremoniously planted new trees to replace the ones cut down en masse during the year to make way for more urbanisation. Mridula-ji chose to plant a mango sapling at the Raj Bhavan grounds so that when it grows up it will offer an annual harvest of mangoes for somebody to enjoy…good thought this!

PANCHAYAT elections are around the corner. I would like to remind residents of Goa that this is the only election where you know the candidate at a personal level. You know the company he keeps, his job, his source of income. You also know his nature, if he is helpful or not.

The candidate can bring visible changes in your immediate vicinity — be it roads, street lights, garbage disposal, drainage, getting certificates, or connections for power or water.

Now let’s take it one step ahead. Every Panchayat has funds, either self-generated or by way of grants from the State or Central government. This fund can be increased substantially if the Panchayat demands for more on the basis of needs.

The process is technically carried out by the BDO. It is you, the voters of a village, who must bring out issues in the Gram Sabha. This is noted by the secretary and forwarded to higher officials for funds and implementation. Unfortunately most of the time Gram Sabha meetings are a battlefield to settle personal scores, with the main issue of development sidelined!

The correct procedure should be the formation of ward committees where villagers discuss issues and bring them out during the Gram Sabha meeting. To get benefits we have to elect the right people. If your MLA or Minister is making rounds in your ward recommending certain candidates, rest assured that you are only falling in a trap. Their candidates are only rubber stamps and will only do their master’s bidding. They are not for common village development but for their own self-development!

Panchayat members should not be politically affiliated. If a candidate is full of criticism of others instead of explaining development plans, keep him away. Villagers should focus on only one thing and that is the overall improvement of the quality of life in their village, no personal agendas. Choose the right person and sustainable development will happen with visible benefits percolating to all. Funds won’t be siphoned off.

I have noticed this time that many educated villagers — be they engineers, retired teachers or other knowledgeable persons — are taking active interest in grassroot politics. That’s a good sign. They may not be good campaigners or beg for votes, but they will keep checks and balances in the Panchayat. This will be good for the village but not for corrupt elements — be they government officials or your MLAs/ministers. Please vote for these educated, unaffiliated candidates. Do not be swayed by talks or taken in by promises for votes. There are many dummy candidates who have filed nomination. They are there to earn. Again many strong candidates are forced to withdraw by force or money. Create leaders amongst you. Corruption can be drastically reduced by bringing transparency, let every work in the village be supervised by a committee member from amongst you.

Here is an opportunity to do good for your village’s development. Take it.

PRIME Minister Narendra Modi may have successfully completed three years in office but his BJP government has not given “ache din” to the people as promised. The real agenda of his government is not to fight hunger, poverty, illiteracy, ignorance, but to play communal politics to interfere in personal religious matters and eating habits of the minorities, reducing them to second and third class citizens of India.

The BJP sells fake dreams and markets Modi like a big brand, portraying him as a leader on the verge of creating history and taking this country on the path of real success and development! As if no development took place in the last 60 years under leaders like Pandit Nehru, Indira Gandhi, Rajiv Gandhi, Narasimha Rao and Dr Manmohan Singh…who brought socialism, the IT sector, computers, liberalisation, etc, to the country!

In fact India is now headed backward into the dark ages under the Modi-led BJP government. Its fascist outfits like RSS are aggressively taking over universities, colleges, schools, judiciary, etc, and elevating RSS people in powerful posts. To unleash a dangerous brand of Hindutva and turn this country into a fundamentalist Taliban-type Hindu Rashtra.

India’s secularism is under threat. All Opposition parties should unite. The people of this country want unity in diversity and to live in a secular India, down with communalism!

IMAGINE a High Court judge in Rajasthan on his last day in office declaring that there should be life imprisonment for cow slaughter! And in the next breath noting that the peacock is celibate and the peahen conceives by drinking the peacock’s tears. Was the judge being coerced into saying all this ridiculous things by someone for whatever reason?

Mouthing this kind of rubbish ruins the image of the judiciary in the country in front of the media and before the people of the country. Does the BJP think that if they engineer certain situations they can crush any rebellion and enforce Emergency, killing several “birds” with one stone? It’s a very heavy gamble they’re taking and citizens who love this country must not allow this to happen.

The Panjim Legislative Assembly bye-election coming up is crucial for the country!

WHY are we in this mess we find ourselves in? It is as if consumerism has been planned and fuelled meticulously by very smart corporates who realize that if the public is kept ignorant and distracted and induced to aspire to the next level – their businesses will always flourish. The government is an accomplice in this kind or promotion.

The more we buy, the happier they are! TV is the main propaganda machine. Mining is not going to go away any time soon. We can try to shut it down in Goa but it will definitely rip apart another piece of mother earth. A long term movement means a call for conscious consumerism. Where we realize that all fossil fuels come with a price attached, be it plastic or petrol.

For example, why use plastic straws to drink anything? We don’t need straws and they were given to us as a novelty item some time back and we unthinkingly continue the habit of using them and aspire for thicker and fancier straws. Who benefits? The manufacturers. At whose cost? Ours. Our ocean wildlife is dying out in our times because of plastic straws primarily…so each one of us has to become a responsible consumer.