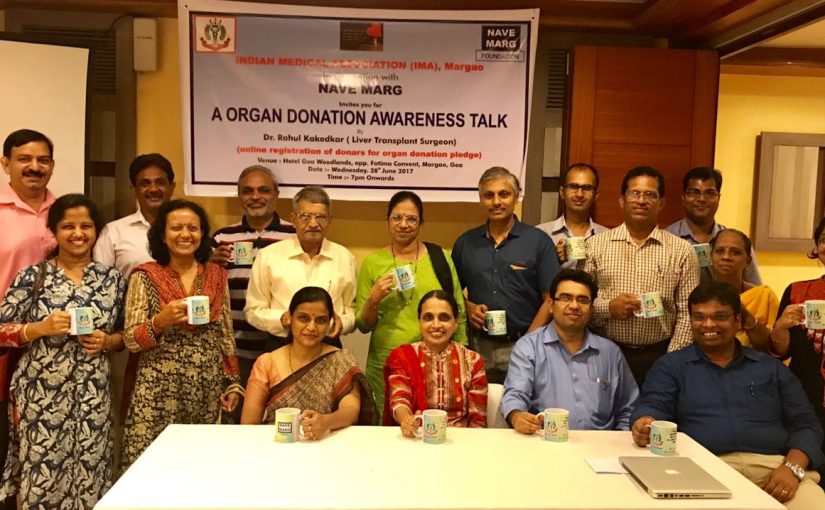 BE AN ORGAN DONOR! Dr Medha Salkar (president, Indian Medical Association, Goa state) and a group of IMA doctors are doing their utmost to inculcate a sense of organ donation in Goa. Towards this cause an official online registration (http://imagoa.in/donor-registration) was launched at a function held at Hotel Fidalgo in Panaji on June 6, 2017. Leading by example the first three to pledge their organs were Dr Medha Salkar,  Dr Kalpana Chodankar (secretary, IMA) and Dr Kartavi Mashelkar (treasurer, IMA), dynamic ladies all. Group pic here also has Dr Shekhar Sakar, Dr Sandesh Chodankar, Dr Shital Lingade, Dr Amol Mahaldar and others, all for organ donation. Think of it as a gift of life to pass on after brain death (which legally defines death of a person in trauma or other cases)

JUST before the 2014 Lok Sabha elections Chief Minister  Manohar Parrikar very recklessly and without application of mind  whatsoever decided to hurriedly tender  the concretisation of the Miramar-Dona Paula Road for a whopping `72 crore. It was obviously done to bolster the much needed party funds for those elections and to also possibly enable some leaders to pocket some crores.

In a sheer criminal waste of public funds, a newly hot mixed, very good road was excavated and we were promised a state of the art concrete one with a cycling track and side walk. The work which started in February 2014 was supposed to be completed within 18 months. With various extended deadlines the road still remains incomplete and so shoddy there are cracks all over which even the blind may see. The work has been poorly and shabbily executed, and that cycling track is nowhere in sight and will never pass any quality control test.

This is just another example of how this government has mastered the art of pouring tax payers money down the drain. Less said the better on the nightmare and horror of residents and businesses along the Miramar-Dona Paula road to hell, which they have had to endure over the last couple of years.

To the good fortune of the authorities Goans are docile and put up with any nonsense. Anywhere else in the country these official and politicians would have been  hung upside down from the nearest lamppost!

`Babush’ Monserrate has announced that he will contest from Panjim constituency as a Congress candidate. Thus should the battle be a one-on-one, the contest could be a cliff-hanger. It may be recalled that in the elections held earlier this year, Sidharth Kuncalienkar polled 7,924 votes to Babush’s 6,855, a slender margin of 1,069 votes and that too on a UGP ticket. AAP’s Valmiki Naik who polled 1944 votes might have led to Babush’s defeat. This time though, Babush is contesting on a Congress ticket and thus a very close contest is on the cards. It may be recalled that in the CCP polls, Babush’s panel won 17 wards to Manohar Parrikar’s BJP 13 wards and the percentage of votes was 48 and 43 per cent respectively. In the Assembly elections too, coincidentally the Congress won 17 seats to BJP’s 13. The debacle that former chief minister Laxmikant Parsekar suffered at the hands of Dayanand Sopte by a massive margin of over 7,000 votes is fresh in the minds of the electorate. A loss for Parrikar will deal a major blow to the hastily cobbled up coalition and we have less than three months to know the result.

WHILE  self-certified nationalists and foot soldiers of the ruling party circulate messages to stop buying Chinese  goods, here’s a shocker. The Gujarat government on July 5 signed an MOU with China’s SAIC Motor Corp for setting up a passenger car manufacturing facility at Halol in the Panchmahal district, with an investment of `2,000 crore. Pseudo-nationalists need to be exposed!

DESPITE there being no dearth of capable and articulate personalities, the BJP has once again displayed its utter political bankruptcy by selecting the most inappropriate and lackluster Vinay Tendulkar as its candidate for the lone Goa seat to the Rajya Sabha.

Instead of choosing a knowledgeable, competent and versatile person, who could through eloquent debates raise and highlight Goa related issues in the Rajya Sabha, the BJP has opted for a 12th standard pass ITI motor mechanic for the very  coveted post. Nothing much can be expected from the inept Vinay Tendulkar in the Rajya Sabha except that we can be sure to see him regularly snoozing in Parliament as Manohar Parrikar did.

In another catastrophic and very shameful move, Manohar Parrikar has ordained the very controversial and tainted Anil Hoble as the chairperson of the Goa State Scheduled Castes and Other Backward Classes Finance and Development Corporation. Hoble was held guilty by the National Green Tribunal (NGT) of having violated  various environmental laws and was fined `20 lakhs for destroying mangroves and illegal land filling. That verdict was later upheld by the Supreme Court.

The NGT ordered the demolition of Hoble River Lounge Bar & Restaurant along the Ribandar-Panaji causeway which, though illegal, was inaugurated by Parrikar on April 1, 2014. Hoble has now been able to flex his political muscles and delay the demolition with Parrikar going all out to regularize his illegal construction. This the law of the jungle under BJP’s goonda raj!

CAN Prime Minister Modi run this country without mixing politics with religion?

Ever since he became prime minister he has been touring the world, having photo sessions with various leaders to distract the people of his own country from all his failures! He lectures world leaders about the importance of fighting all forms of terror jointly, but deliberately turns a blind eye to the terror and violence unleashed by his own right-wing organisations in India.

Mobs belonging to the Sangh Parivar are daringly attacking/killing innocent people, courtesy holy-cow politics practiced by the BJP. These so called cow-protectors are goons terrorising vulnerable minorities, and I feel Modi is the weakest, only communal prime minister in the history of India!

Right from Jawarharlal Nehru, Lal Bahadur Shashtri, Indira Gandhi, Rajiv Gandhi, V P Singh, Narsimha Rao, Deve Gouda, I K Gujral to Dr Manmohan Singh, people of all faiths felt safe and never felt persecuted like they do today. Never before have such open attacks and killings been carried out on mere suspicion of whether a community eats beef or not, stores beef or not! And this is happening in broad daylight.

Narendra Modi should stop mixing religion with politics, stop acting like a slave of the RSS-Sangh Parivar gangsters from Nagpur, before projecting himself as the truly tough, no-nonsense, most powerful leader of India!