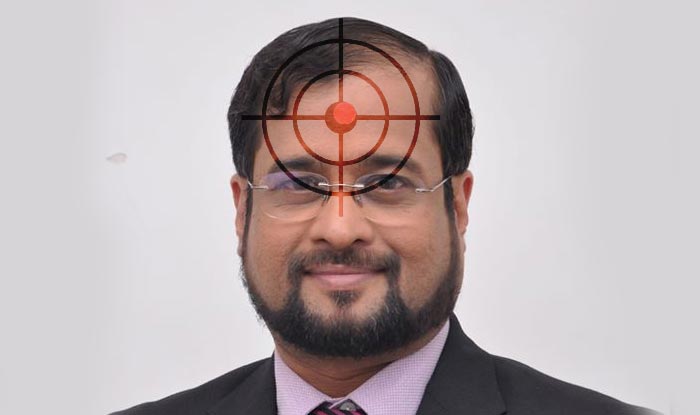 LITIGATION: Vexatious litigation against the media is among the tools used by Sanatan Sanstha to silence the media and activists. Besides more than a hundred cases against the media pending in the Ponda District court alone, a case has been filed against Dhirendra Jha, the author of ‘Shadow Armies’ an excerpt of which we carried in our last issue.
(above) Nikhil Wagle who recently received threats

Nikhil Wagle, former editor of the crusading Mahanagar and former chief of the Marathi edition of CNN 18 admits to having received terror threats, but has refused police security

NIKHIL Wagle, seasoned journalist and editor, knows a thing or two about countering abuse and death threats. Unfazed by the latest threat to his life allegedly from the radical Hindu organisation Sanatan Sanstha, he plans to live and work as aggressively and “without fear or favour”, as he always has. But the threat to him and Shyamsundar Sonar, a journalist and preacher, is a telling comment on at least two aspects of contemporary India – that death threats are effortlessly issued to those who challenge the dominant ideology, and that organisations and individuals dismissed as fringe elements of the right-wing are capable of violence that few had imagined. Has the fiercely argumentative India turned into the intolerant India?

For at least four years now, Wagle has lived and worked under threats from the Sanstha, which he said has been on his trail since he, as editor of the Marathi channel IBN-Lokmat, anchored a programme on rationalism and the need for an anti-superstition law. The Sanstha representative had walked out of the discussion. The next thing Wagle knew, his mobile number was being circulated widely, he was receiving abusive calls, threatened with death, and the organisation’s publication, Sanatan Prabhat, had published articles denouncing him. His photograph was put up with a cross over it, just as the organisation had done with photographs of rationalist Dr Narendra Dabholkar and rationalist-Leftist Govind Pansare. Both were murdered at point-blank range by gunmen, Dabholkar in August 2013 and Pansare in February, who then fled away on motorcycles.

ALARM BELLS
SO, when Sameer Gaikwad, an activist of the Sanstha, was arrested last weekend in connection with Pansare’s murder and his call data records revealed that there were frequent references to “Wagle being next”, the alarm bells went off. The investigation has widened to include at least one more activist of the Sanstha, who may also be linked to the murder of scholar Dr MM Kalburgi in Dharwad last month. The Sanstha has denied any involvement in the grisly turn of affairs and claimed that Gaikwad has been framed. Predictably, the effort is to project him and possible others as lone rangers acting on hurt sentiment, ignoring the thrust and threats of the organisation
itself. Nikhil Wagle, former editor of the crusading Mahanagar and former chief of the Marathi edition of CNN 18 admits to having received terror threats, but has refused police security Wagle has refused police protection. This is no different from the manner in which Wagle reacted in 1990s when enraged Shiv Sainiks, sometimes on instructions from their leader Bal Thackeray and at other times acting of their own accord, frequently assaulted him, beat up his staff with sticks and crow bars, ransacked and vandalised his office, as payback for the articles in the popular Marathi eveninger, Mahanagar, which he edited. He had firmly stood his ground. In the mid-1900s. journalists and editors who dared to question the Shiv Sena were routinely attacked, journalists who stood up against the strong-arm silencing tactics were also targeted, even notable historian-editor Dr Aroon Tikekar was threatened with “certain death” for a hardhittin  editorial in the Marathi daily, Loksatta. Since then editors, writers, researchers and scholars have often been threatened by one or another fringe outfit in Maharashtra. “Nothing has changed,” Wagle said. “We are all still battling similar forces who want to silence all reason and opposition.”

VICIOUS ATMOSPHERE
BUT times have changed. The culture of verbal and physical violence as counter-argument has deepened and turned more vicious than anyone could have imagined. And killing an adversary – now looked upon as the enemy,
no less – has become so matter-offact that random people discuss this possibility gleefully on the social media. Paid trolls denounce, disparage and threaten those who dare to voice an opinion different from the dominant majoritarian one.
A contrarian Twitter or Facebook post brings torrents of abuse, rape threats to women and death threats to men. The bile iN the virtual world is matched by the situation in the real world. Such threats are rarely criticised by influential political or social leaders. Each word of abuse, every threat, is dismissed as the ranting of a person or organisation on the fringe but it takes us closer to becoming a republic of intolerance. Here, it is the Sanatan Sanstha allegedly threatening to murder its critics and questioners; elsewhere, a scholar like Kalburgi is shot dead, a Muslim scholar is stopped from writing columns on he Ramayana, Nobel winner Dr Amartya Sen is vilified, Dalits and Muslims are denied their beef, the Vice President of India is mocked and taunted for his religion, a Bharat Ratna is demanded for Vinayak Damodar Savarkar and so on. The Sri Ram Sene in Karnataka “prevailed upon” two Kannada writers to withdraw their names from a letter that suggested its involvement in Kalburgi’s murder. The intolerance for other points of view is now turning endemic. In this republic of intolerance, murdering those with differing opinions or agendas, seems completely acceptable, as demonstrated by the innumerable delighted reactions on Twitter to the threat to Wagle. Organisations such as the Sanatan Sanstha draw admiration, not condemnation.

A HISTORY OF VIOLENCE
WAGLE’S style of journalism and questioning is perhaps aggressive and riles up some in his audience, as some editors inimical to him have pointed out in the past. But what explains the similar threat to the genteel, popular warkari preacher and columnist Shyamsundar Sonar? He too was issued death threats by the Sanstha earlier this month for spreading “unscientific interpretations” of the bhakti saint Sant Tukaram’s writings.The Shiv Sena’s attacks on journalists in Bombay, then still Bombay, in the 1990s were thought to be so despicable, the idea that journalists who disagreed with the party could be beaten wit crowbars so atypical of the dominant
culture, that it had brought more than a dozen stalwarts of Indian journalism and scores of journalists from across the country together for the first and only open dharna against Bal Thackeray opposite the Sena Bhavan, right in the tiger’s lair, as it were. Can we even imagine a comparable act of defiance against the Sanatan Sanstha now?
The Sanstha’s hostility is a continuation of the idea that the only way to deal with adversaries is to beat them into silence – or silence them forever. Registered as a charity organisation with its own cult following, the Sanstha
has consistently portrayed rationalists and anti-superstition campaigners as “anti-Hindu”.
The organisation’s publications and books assert that “its mission is the reinstatement of the Divine Kingdom through social upliftment, national security, and awakening of Dharma…which includes creation of awareness about the ‘unscientific’ campaigns of the Andhashraddha Nirmulan Samiti” that was co-founded and led by Dabholkar, and supported by Pansare among others. The Sanstha considered Dabholkar and Pansare as “unrighteous individuals who ridicule Dharma, deities…”, clearly identifying them as enemies of the faith. Wagle was the lead speaker at a wellattended programme in Pune last month to mark Dr Dabholkar’s third death anniversary.

MOVING MAINSTREAM
FOR years, as it spewed such diatribes, the Sanstha was considered a fringe element. But its capacity for violence was demonstrated even before its activists set out to allegedly commit murder. In June 2008, its activists set off three low-grade bombs in Thane in suburban Mumbai – two in the parking lot of theatres that screened the film Jodha Akbar and one that staged a Marathi play. The following year, in October, two of its members were killed when an improvised bomb went off on the scooter on which they were transporting it near Margao, Goa. Eight activists of the Sanstha were charged in this case. However, three went absconding and the other five were let off for lack
of evidence. The incidents prompted the Maharashtra government to seek a ban on the Sanstha in 2011 but
the Central government did not entertain the case. Since then, the organisation has moved on from religious propaganda, threats and crude bombs to alleged assassinations, and threatens to carry out more of them. If there is any wonder that the snare is closing in on the Sanstha under a Bharatiya Janata Party government, it should be remembered that the Rashtriya Swayamsevak Sangh spokespersons have been at pains to differentiate the Sanstha from their own cultural organisation. The threats to Wagle and Sonar are personal but they actually represent a broader, creeping culture of intolerance.