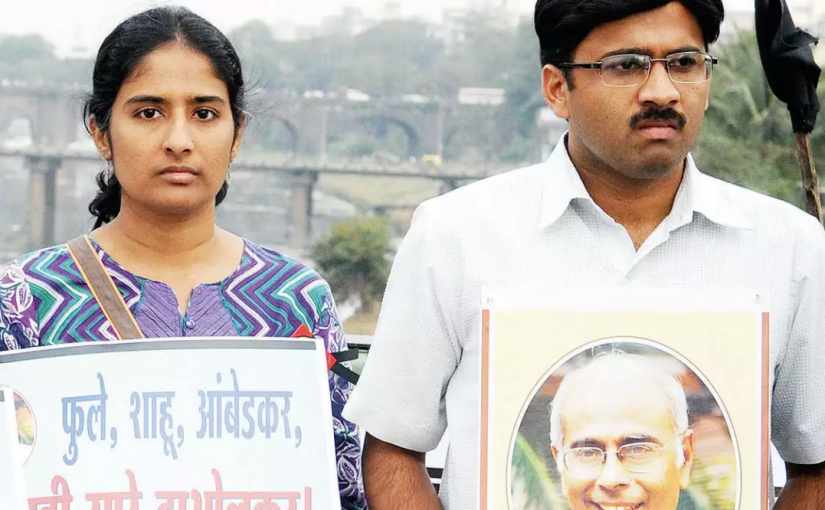 THE NEXT GENERATION: Mukta and Hamid Dabholkar are carrying on their father’s fight

On the eve of the first death anniversary of Narendra Dabholkar, the CBI finally managed to nab the man who pulled the trigger. The killer, Sachin Andure, is alleged to be closely connected with the Goa based Sanatan Sanstha and its associated hard line Hindu organisations. He was arrested from Nalasopra near Mumbai

arendra Dabholkar was shot dead by two unidentified gunmen at V R Shinde Bridge in Pune on August 20, 2013. FIive years after his murder, the question “Who killed Dabholkar?” remains unanswered, as investigative agencies have kept making new revelations, some of them contradictory to each other.

The arrests were on the basis of a ballistic report of firearms seized from the duo when they were arrested by Mumbra police in an extortion case on August 20, 2013, the day Dabholkar was murdered. The report suggested that one of the firearms (seized from Khandelwal) matched with the “markings” on a cartridge seized from the crime scene.

Both Nagori and Khandelwal were later released on bail. Meanwhile, the Central Bureau of Investigation (CBI) arrested Sanatan Sanstha seeker Dr Virendrasinh Tawde in the murder case on June 10, 2016.

Till now, the CBI has not linked Nagori and Khandelwal to the Dabholkar murder. But, along with Tawde, the CBI has named Vinay Pawar, who is missing since 2009, Sarang Akolkar, who is absconding in the October 2009 Goa blast case, as prime suspects and also alleged that the duo had shot Dabholkar dead.

Now, the CBI has arrested Sachin Prakashrao Andure (28) from Aurangabad alleging that he was among those who shot Dabholkar. The CBI also suspects that Andure hatched the murder conspiracy with Tawde, thus raising questions about the role of Akolkar and Pawar in the case. The defence lawyer pointed out these contradictions before the court on Sunday and requested the court to direct the CBI to produce the copy of its chargesheet against Tawde, which stated that Akolkar and Pawar had shot Dabholkar dead.

Asked about this contradiction, senior CBI official claimed: “Please read the chargesheet. We have never said Vinay Pawar and Akolkar were shooters, but have said persons looking like them are suspected to be behind the killing. So, there is no contradiction in our theory. Further probe in the case will bring out more details about the conspiracy.”

But, in the charge-sheet filed against Tawde on September 8, 2016, which is accessed by The Indian Express, the CBI had stated: “… the investigation has established through oral and documentary evidences that Dr Virendrasinh Tawade who harboured enimity/hatred with Dr. Narendra Dabholkar owing to the ideological differences between Andhashraddha Nirmulan Samiti (ANIS) and Sanatan Sanstha, criminally conspired with Vinay Pawar and Sarang Akolkar and others to murder Dr. Dabholkar and in pursuance of the said criminal conspiracy, Vinay Pawar and Sarang Akolkar shot dead Dr. Dabholkar on August 20, 2013 at about 7.25 am at Pune.”

In the chargesheet, the CBI also gave details of the alleged email conversation between Tawade and Akolkar, against whom a Red Corner Notice had been issued by the Interpol in July 2012. “One email dates April 20, 2009, from Sarang Akolkar to Tawde mentions about availability of country made arms (deshi banavatiche sahitya) in UP and MP. It also mentioned about foreign made arms (pardeshi sahitya) availability in Assam. Here coded language has been used. It is also mentioned in email about raising of army of 15,000 persons for financial the procurement of firearms (sahitya), even theft could be committed, in case of need,” the charge sheet stated.

A statement given by a Hindutva activist, Sanjay Sadvilkar, from Kolhapur, a witness in the case, helped the CBI in the probe. The CBI claims that even after Akolkar went absconding, Tawde’s association with him continued. According to the CBI, Tawde and Akolkar had a meeting with Sanjay Sadvilkar from Kolhapur in 2013. Tawade wanted to manufacture weapons with Sadvilkar’s help. “Akolkar had for this purpose brought samples of one country made pistol and one country made revolver of high quality,” it is stated. Sanatan Sanstha calls Sadvilkar a “bogus” witness.
Andure’s name had cropped up during the interrogation of three Hindutva activists — Vaibhav Raut, Sharad Kalaskar and Sudhanva Gondhalekar — arrested by the ATS on August 10, along with recovery of about 20 crude bombs, pistols, magazines and explosive material from Nallasopara and Pune.

The ATS arrested the trio following clues obtained from the Karnataka police investigation into the Gauri Lankesh murder case.

The Maharashtra government has indicated that it would follow up on its old proposal to ban Sanatan Sanstha in light of the arms haul at Nalasopara and the arrest of Vaibhav Raut, who is suspected to be an activist of the right-wing outfit. Meanwhile, at a route march in support at Nalasopara on Friday, Raut was hailed as “Desh Ka Neta” while the ATS was condemned for acting under pressure from the ‘butcher lobby’ that Raut is said to have opposed.

Though MoS for Home Affairs (Rural) Deepak Kesarkar had assured, after the huge stock of arms and explosives were recovered at Nalasopara, that investigating agencies would spare no one, he had refrained from taking any name. However, a senior officer has confirmed that the state is all likely to check with the Centre the status of its old proposal seeking a ban on Sanatan Sanstha.

In 2008 and 2011, the then Congress-led government had sent two proposals to the Centre for banning the right-wing group.
However, the proposal was struck down by the Centre.

The official said that due to the structure adopted by the Sanatan Sanstha, it would be difficult to ban the outfit. “They are registered under different names, and registration for every district and city are different. While the original organization Sanatan Bharatiya Sanskruti Sanstha was formed in 1990, it changed name and got registered under several other names at various places in 1999,” the officer said.