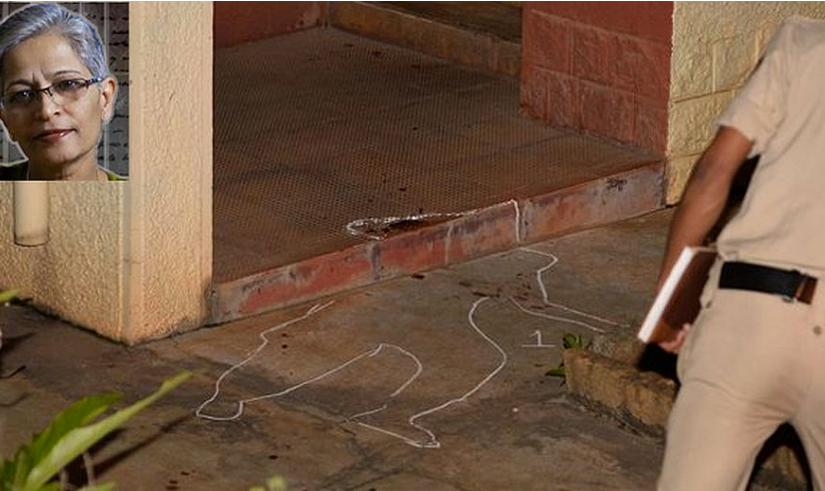 INVESTIGATIONS CONTINUE: Eleven months after Gauri Lankesh was shot dead on returning home, the Karnataka SIT seems to be gathering speed in its hunt for her killers. They allege they have found many links, financial and otherwise, between the suspects and the Goa-based Sanatan Sanstha, something the Sanatan Sanstha hotly denies

The Karnataka SIT probe into the Gauri Lankesh murder claims that besides serving as a direct link for the covert group to the Sanatan Sanstha, Amit Degwekar was also closely associated with Amol Kale in plotting Lankesh’s murder

When Amit Degwekar, 38, a resident of the extreme radical Hindutva group Sanatan Sanstha’s ashram in Ponda, Goa, was arrested in May this year for the murder of journalist Gauri Lankesh, a Special Investigation Team (SIT) of Karnataka Police had found in his possession several envelopes with varying amounts of cash. The money came to over `1.5 lakh, reports The Indian Express.

The cash found in the envelopes had been withdrawn from a Sanatan Sanstha bank account and were meant to be given to field workers associated with a secret covert activities unit of the ultra-right wing Hindutva group, allegedly involved in assassinations and subversion in Karnataka and Maharashtra, the SIT has surmised, following investigations after the arrest of Degwekar and four others for direct involvement in Lankesh’s murder.

A bank pass book of the Sanstha account from where the money was drawn was found in Degwekar’s possession, it is learnt, says an Indian Express report.

A promoter and editor of ‘Sanatan Prabhat’, a publication of the Sanstha, Degwekar, who worked ostensibly under supervision of a senior member of the Hindutva outfit, has been identified by SIT as a channel for funds to a covert activities group headed by Amol Kale, 37, a Pune resident and former convenor of Sanstha-affiliate Hindu Janajagruti Samiti (HJS).

The probe has so far found that besides serving as a direct link for the covert group to the Sanatan Sanstha, Degwekar was also closely associated with Kale in plotting Lankesh’s murder. They ostensibly travelled together on one occasion to study her daily movements in the lead-up to the murder on the evening of September 5, 2017. Lankesh had at the time just returned from work to her home in Bengaluru.

Degwekar was arrested along with Kale and Manohar Edave, 29, a Karnataka resident, from Davangere in southern Karnataka in May this year. The SIT arrested them on the basis of information from a former HJS activist identified as Sujeet Kumar, 38.

The SIT had arrested Sujeet for allegedly playing a central role in organising logistics for the murder.

A resident at Sanatan Sanstha’s ashram for several years, Degwekar, according to investigators, was a roommate of Malgonda Patil, one of the two Sanstha men killed in October 2009 in a blast in Madgaon, Goa.

He was at the time allegedly ferrying an IED bomb to plant it at a Diwali Narkasur-burning celebration that was opposed by the Sanstha for apparently being against Hindu belief.

The SIT says Degwekar is currently the only direct link between the Lankesh assassination plot and the Sanstha, although several others arrested have had strong links to the Sanstha in the past, or have been associated with the outfit through splinter radical Hindutva groups such as the Hindu Yuva Sena or Sri Rama Sena.

According to sources in SIT, the envelopes carrying cash found with Degwekar were meant to be given to field workers co-opted into the radical unit — such as the main shooter Parashuram Waghmare, 26, who was recruited from Sri Rama Sena in Vijayapura to shoot Lankesh; and K T Naveen Kumar, 37, recruited from Hindu Yuva Sena in Maddur to allegedly provide logistics for the murder, reports The Indian Express.

In the course of his interrogation, Degwekar has reportedly claimed that cash found on him were payments made by subscribers of Sanatan Sanstha’s publications, which he claimed to promote by travelling around the country.

“My brother has been wrongly arrested. He is a member of Sanatan Sanstha for a decade now. He lives and works at the Sanatan Sanstha ashram in Goa,” Degwekar’s brother Viraj had said after his arrest in May.

Sanstha spokesperson Chethan Rajhans has stated: “Amit Degwekar promoted ‘Sanatan Prabhat’ — he used to come to the ashram for that work. The Sanstha is involved in spiritual enhancement of Hindus. We are not killers.”

Since identifying Parashuram Waghmare as the man who pulled the trigger on Lankesh and arresting him on June 11, the SIT has found that he was paid around `13,000 to cover expenses after the murder. The assassin was also given a similar amounts by Kale after he was recruited two years ago and trained in 2017 in firing guns, sources said.

The probe has found that the men in charge of the covert activities group like Kale went to great lengths to ensure that operatives at the lower levels like Waghmare and Naveen Kumar had access to only a minimum amount of information about the assassination plots they were roped into.

On two occasions he came to Bengaluru — in July 2017 for a recce and in September 2017 for the murder — Waghmare was apparently taken blindfolded to hideouts.