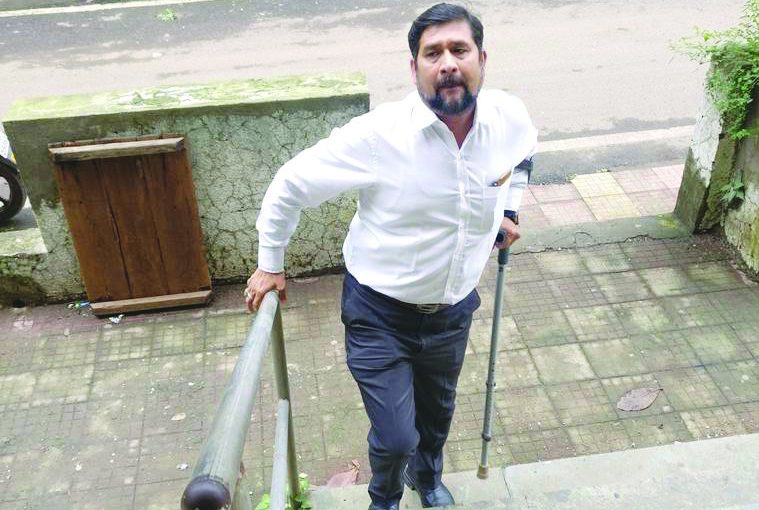 Broken completely: Vijay Vajhala, who had revision surgery, is one of several patients unlucky enough to have had one of the ‘faulty’ hip replacements

In the wake of the revelation that Johnson’s baby powder reportedly causes cancer, comes the news that the hip transplant kit imported by the company is ‘faulty’ with at least four deaths reported. These finding are part of a report prepared by an expert committee in February 2018, but six months down the line, the government is yet to implement any of the recommendations put forth!

The Indian arm of Johnson & Johnson, one of the leading global pharma majors, “suppressed” key facts on the harmful aftermath of surgeries conducted on hundreds of patients in the country using “faulty” hip replacement systems it imported and sold.
In a “clear abdication of responsibility”, it did not inform the national regulator about the exact number of patients who used these devices, the adverse reports following such surgeries and the corrective operations subsequently conducted. It also “did not provide any compensation” to those affected.
These findings form the core of a report prepared by an expert committee set up by the Union Ministry of Health & Family Welfare to investigate complaints on the hip implant devices sold by the company in India. The committee, which was set up on February 8, 2017, submitted its report on February 19, 2018. The Government is yet to implement the recommendations.
The report states that over 3,600 patients with the faulty implants remain untraceable, and that at least four deaths have been reported from those who underwent surgeries using these devices.
The committee, chaired by Dr Arun Agarwal, ex-Dean and Professor of ENT, Maulana Azad Medical College, New Delhi, has recommended that J&J be made liable to pay at least `20 lakh to each affected patient, and that the reimbursement programme for revision surgeries should continue until August 2025.
The report’s findings constitute the first official indictment in India against J&J, which imported and sold ASR XL Acetabular Hip System and ASR Hip Resurfacing System in the country — these devices were globally recalled in 2010.
The committee concluded: “…the ASR hip implants were found to be faulty, which resulted in higher revision surgeries”; the “…accelerated wear of metal on metal implant leads to higher levels of cobalt and chromium in the blood which lead to toxicity… these metal ions damage tissues and further damage body organs” and “may also cause localised and systematic health problems”.

All of this, the panel found, “results in increased pain and decreases mobility affecting their family and social life” and has “a negative impact on their self esteem and mental health”.
J&J’s hip implant devices, manufactured by its subsidiary DePuy Orthopaedics Inc, were first cleared by the United States Food and Drug Administration (USFDA) in 2005. Following red flags on the rising number of revision surgeries, the firm recalled the devices on August 24, 2010.
Asked about the committee’s findings, a company spokesperson said: “The Expert Committee Report has not been provided to the company for review so it would be inappropriate for us to comment on it.”
The Indian Express spoke to six patients in India who had used these implants and found that their accounts were in line with the panel’s conclusions. They included Vijay Anant Vojhala, a former product manager at a medical devices company, who was the only patient to testify before the committee.
“After the revision surgery, I could not work for at least six months while recovering from the hip replacement. Even after recovering, I had to quit my job since I was not physically fit. The decision to undergo revision surgery had broken me completely from inside. And now, the company refuses to pay any compensation,” says Vojhala, 45, from Mumbai.
The report states that the patients “had to live a restricted lifestyle with a compromised physical state, thus putting them at pain and agony throughout their life, which will also have a bearing on their dependents apart from loss of work”.

The key findings and observations of the committee are as follows:

Majority of implants untraceable
The company told the regulator, CDSCO (Central Drugs Standard Control Organization), that “the total number of patients worldwide wherein ASR has been implanted was around 93,000. Out of this, approximately 4,700 is the number of patients for India”.
But, the report notes, the firm did not provide details of all the patients in India. Until March 2017, only 1,032 patients were registered with the ASR helpline; 254 patients underwent revision surgery; 774 patients were monitored by surgeons.
“…the firm has been found evasive in providing information desired by the committee regarding the design of the ASR, patient details including address, contact, compensation details, details of the usage of ASR, follow up Adverse Drug Reaction reports. The firm also appears to (have) delayed in passing information and awareness about the failure of the ASR,” it says.
Discrepancy in adverse reports
The report points to discrepancy in data submitted by J&J on the number of adverse event reports related to the implants. The reporting of adverse events surrounding a medical product is mandatory and contributes to a post-marketing safety surveillance programme.
The committee found that J&J reported 121 “serious” adverse events to CDSCO from January 2014 to June 2017. But, the report says, “only 48 of such reports are available with CDSCO”. It noted that until March 2017, “a total of 254 patients have undergone revision surgeries while 774 patients were kept on monitoring by surgeons”.
“These 254 revision surgeries were necessitated due to adverse events in patients, whereas the firm has stated that they have submitted 121 adverse reports till July, 2017.
Both the figures, stands in contradiction with each other with respect to the number of revision surgeries and reported adverse events to CDSCO,” the report says.
“On 12 June, 2014, the firm has reported about four deaths of the patients who had undergone ASR surgery in the past. Upon perusal of the letter it stated that the firm has given only a brief paragraph informing about the deaths and possible cause. The committee feels that the information is quite brief and such serious events of death ought to have been investigated and informed with all relevant data by the firm,” the report says.
Suppressed facts on revision surgery
The committee found that the revision surgery rate was not 12%, as reported by the company, but could be as high as 35%.

“…as per 2014 data, the cases of revision surgery were very high almost 35%. However, as per the latest data, the rate comes out to be 25%. Even assuming it to be the correct figure, the data is very startling on the number of patients who had undergone revision surgery, let alone their pain and sufferings.
“The committee noted that this data is only for the patients who had contacted the registry of the firm and it does not count those patients on whom the implant was inserted,” the report says.
The committee noted that “in India, the revision surgeries took place around 7 years after the date of primary surgery… the product was recalled globally in the year 2010. Whereas the revision surgery in India started only in the year 2014”.
No compensation paid
The committee pointed out that by the end of 2013, J&J agreed for a settlement estimated at $2.47 billion to around 8,000 claimants in the United States. However, report says, “the firm has not provided any conclusive response” on compensation in India. “It is clear that the firm has not paid any compensation,” it says.
According to information provided by the firm, patients registered for reimbursement were provided “free hospitalisation, medical management including cost of diagnostic tests and the cost of implant”. According to the firm, the report says, `1.76 crore has been reimbursed for diagnostic tests, and `14.2 crore towards revision surgery.
“In a strange way”, the report says, the company was “equating reimbursement with compensation”.