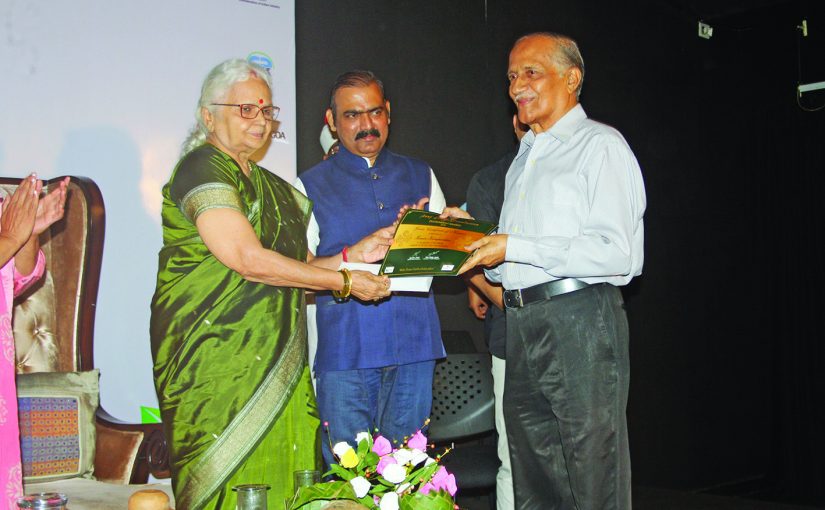 Take a bow Dr Hemant Karapurkar for being a green friend! Governor Mridula Sinha gave away an individual award at the 6th Kalakriti Goa Environment Festival, which opened at the Kala Academy in Panaji on Aug 31, 2018. Dr Karapurkar, a former director of agriculture and president of Botanical Society of Goa for many years, worked tirelessly for the wellbeing of the environment in Goa. Also seen in pic is film actor Makarand Anaspure (Naam founder and Maharashtra Swachh Bharat Ambassador). Mr Anaspure in his peppery talk urged people not to harm the very things they worship in the name of religious sentiment.

POLITICAL use and misuse of social media was propelled by the BJP to the present chaotic mess. Whether this was their objective only they will know…that this is their philosophy is well known. But now BJP tried to show that BJP MLAs donated Rs 25 crore towards Kerala flood relief whereas the same came from oil companies! With so many people resorting to downright lies it is important we can spot liars and boycott all their media posts in future. How to spot them?
Simple, a liar always slips up. Take the cow slaughter ban. When one talks of the menace of bovines sitting on roads, they are referred to as cattle and not cows. When one talks of beef, they speak of cow meat. In Goa, we saw some protesters trying to stop the reopening of the Goa Meat Complex, shouting ban on cow slaughter. The Mean Complex does not slaughter cows. These are not slips of the tongue but deliberate use of correct words. Cow slaughter is banned pan India, but people speak of `cow slaughter’ not being banned in Kerala! These are the ways you can spot a liar and you need to dump him.
We have two glaring examples of downright liars. First, in the recently concluded Assembly session of Goa: Those who say Goans are sold formalin free fish. Those who want to subvert the SC ruling on illegal mining in Goa. Those who say Goans use air conditioners, get high bills and then crib about high tariff, and then go and increase their own salaries by 77% citing high cost of living but not mentioning inflation of only 7%, or that they get free electricity/telephone/water/etc. They are preparing for their pension.
The second example is the campaign of the BJP to stop help to Kerala flood victims. The PM himself goes back on his word that the Gal Mobile gifted by the Israeli PM would be of great help in times of calamities, but refused to send the same to Kerala.
Goans must think about the situation in Goa in case of calamity. Do they think they would get help? Still we elect these people!
– R Fernandes, Margao.

HEALTHCARE FOR POLITICIANS!
WITH the unending health predicaments of our ministers and to ease financial pain to taxpayers, the Goa government would be well advised to book at discounted rates on a long term basis — some rooms at Memorial Sloan Kettering Cancer Hospital in New York, and also at Lilavati and Kokilaben Ambani hospitals in Mumbai. With the abundant curses of the Goan people it is now to be seen who the next minister will be to join the hospitalized bunch.
It is clear that playing with the lives of fellow citizens for 30 pieces of silver will leave the entire Cabinet comatose! It is atrocious that government limits health insurance for common people but ministers enjoy the privilege of treatment in plush hospitals of their choice, with unlimited expenditure…all paid for by taxpayers. The total expenditure over the last few months for Manohar Parrikar and Pandurang Madkaikar must have now already crossed into several crores. God save Goa!
– Aires Rodrigues, Ribandar

HELP TALEIGAO!
AT first hand, congrats and best wishes for such wonderful work — you make the world a better place for Goans! Appreciate it if you can publish this letter. Taleigao is a satellite suburb of Panaji and very convenient and popular residential hub. While the main roads are hot mixed and shiny, the interiors are neglected for years.
There was a massive project for a much awaited sewerage connections in some wards last year and roads were totally destroyed, lines were laid but they are still not connected. The roads have been left dug up. Areas below Nagali hills, Sateri temple, Nagali- Kevnem area can be promoted as off-roading test tracks by auto companies! People living here are mostly low/middle income groups so have no political clout to get the roads sorted out.
It is high time our administration wakes up and looks into the mess of inner roads. Please spread the word so that relevant authorities get their act together. Look forward to all this happening. Please visit Sateri temple, Nagali/ NIO colony in Taleigao for photos of our disaster zones. Many thanks!
– Anton, Taleigao

POLITICAL BANKRUPTCY
CHIEF Minister Manohar Parrikar has reportedly left for the US for the third time to do further treat his pancreatic ailment following advice from doctors at Mumbai-based Lilavati Hospital and is expected to stay in the US hospital for a month. Now, isn’t that ridiculous? Hey, why should we Goans suffer for long in the first place due to the illness of this one single politician in Goa?
Can’t Mr Parrikar decide to retire immediately using common sense due to his ongoing health problems or give his post of chief minister to someone else from his own Cabinet for the good of Goa and Goans? Or does Mr Parrikar still think that there is no better intelligent leader than him as he still feels that he alone is the smartest of all in Goa? This is selfish thinking!
Hey, let’s face it. If any Congress leader was currently refusing to step down from the chief minister’s post despite a serious illness, then this same Parrikar would have taken out a massive rally or morcha with BJP supporters and would have forced the said leader to resign immediately. So now why are the Opposition leaders not taking Mr Parrikar to task for deliberately paralyzing the entire administration out of his own personal selfish interests and not forcing him to resign due to his worsening health? Or are they staying mum because they feel if they speak against Mr Parrikar their own skeletons might come tumbling out of their cupboards?
Leaders who have no guts to speak on behalf of Goans and who believe that they are incompetent against leaders like Mr Parrikar should never contest further elections but gracefully retire from active politics, sit at home for good. Goa badly needs daring, gutsy, secular leaders to liberate it from old power-hungry, outdated, selfish, corrupt, communal leaders, to save us from political bankruptcy. Viva Goenkar
– Jerry Fernandes, Saligao

GOA GONE!
I have been visiting Goa annually for several years as I love your State and people. But I am dismayed by lack of legislation allowing complete destruction of Goa’s beautiful environment. Along with concrete structures, pollution is increasing tremendously, while sadly Goa’s trademark coconut palms, greenery & natural flora & fauna are vanishing.
All those who build in Goa must show respect for the land, build smaller structures in environmentally friendly ways. Whether individual homes or housing complexes, builders should incorporate maximum fruit trees, local flowers & other plants and more green areas. I believe in spirit and karma. The cost may initially seem more and profits less, but the blessings of the Earth will shower down upon them hugely and in unexpected ways.
Legislation should also be brought to make these things mandatory.
– Deb Williams, UK