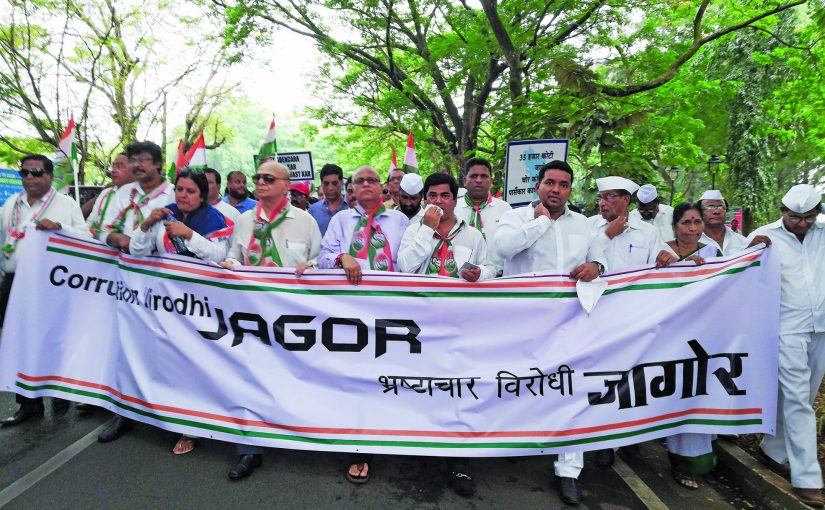 The Congress party held a protest march in Panjim city on October 10, 2018, against the failure of the Manohar Parrikar-led government — demanding clean administration in the State.

Hundreds of Congress workers walked on the busy DB Bandodkar road shouting slogans against the government and later gathered at Azad Maidan where the leaders addressed the public meeting. The Congress party has come down heavily on the Goa government over its rampant corruption in various sectors and failure towards public welfare. Pointing at scams in beach cleaning, leasing of GTDC residencies, SEZ, ODP, casinos, drugs, etc. Former Chief Minister Pratapsing Rane pointed on the inaction against Vasudev Parab, the general secretary of the BJP in North Goa, who was implicated in the Ketamine drug factory scandal.

Former CMs Digambar Kamat and Ravi Naik questioned the need for a third Mandovi Bridge when the State is running into financial crisis. Leader of Opposition Chandrakant Kavlekar spoke about the leasing of GTDC residencies alleging government properties belonging to GTDC are being sold to private parties for a throwaway price.

GOOD NEWS FOR ROAD SAFETY
The state will soon implement rules that will make it very financially risky to drive an uninsured vehicle. All uninsured vehicles run the risk of being seized and sold off in case of accidents, to pay compensation to the victim or victims.The Transport Department will soon put a draft notification in a public domain for a 15-day period so that the public cas put forth suggestions and objections to this proposed amendment to the Goa Motor Vehicles Rules, 1991 .And in another good step, the Goa police plan to crack down on habitual traffic offenders. The police are poised to implement an e-challan system, which will help traffic cops identify repeat traffic offenders on the spot. Such repeat offenders will have to face enhanced penalties as per traffic rules.Explaining the new initiative, Director General of Police Dr Muktesh Chander said, “With the help of e-challan, the data on traffic offenders will be available at one click.

ORAL CANCER ON THE RISE There is rising concern over cases of Oral cancer in the state with an average of one oral cancer case coming to light on
a daily basis at the Goa Dental College in Bambolim. The increasing number of cases of oral cancer coming to light was discussed at the District Task Force for Tobacco Control (DTFTC) meeting chaired by the North Goa Collector Levinson Martins earlier this week.
This is the first DTFTC meeting that has taken place after Martins took over as Collector. He has insisted on stringent enforcement of the Cigarettes and Other Tobacco Products Act (COPTA) 2003.

With rising cases of foreigners, mostly east Europeans, rigging Automated Teller Machines (ATM) using advanced technological devices, the Goa police have decided to take aggressive measures. mFor starters, those coming forward with information of ATMs rigged with the ‘skimming device’ will be awarded a thousand rupees by the menin- uniform. And, if the culprit is caught, the prize money will go up to `5000. A formal announcement of the reward scheme is expected to be made
by the Police Department in a day or two.
The Goa police have also prepared a video about the modus operandi used by the fraudsters using a skimming device. This video will be circulated by the police among citizens through social media and other means to raise public awareness according to Director General of Police Dr Muktesh Chander.