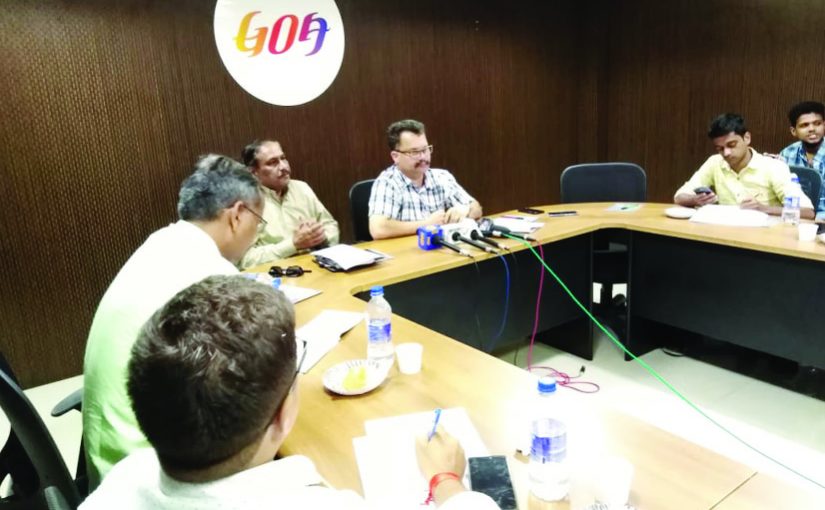 IT WAS his first press conference as power minister and even as media persons congratulated him on becoming a mantri, Nilesh Cabral was all thumbs up. Made quite a few achche din promises as far as power is concerned –
Goans may look forward to 24 hours of uninterrupted electricity give or take a few months. He has started working on it but first all the damage done by cyclonic storms on Oct 1 on the eve of Gandhi Jayanti in north Goa areas must be repaired and power restored to people who have gone for several days without electricity at home. His estimate is that it was a `2 crore damage — poles, power lines, other infrastructural hardware has to be replaced. He said he was still awaiting the final report.
He was meeting media people for the first time after he took over as Power Minister and was still getting his bearings with the help of chief electrical engineer N Neelakanta Reddy who was present at the press conference of Oct 3, 2018, at the GTDC Boardroom at Paryatan Bhavan at Patto in Panani.
Goa’s new power minister sighed that the situation in Goa is quite dismal because even a falling twig can trip an overhead wire! Forget cyclonic winds. Electrical cables, transformers, electrical poles, light fixtures, etc, have been uprooted, broken and damaged and this is what caused the power failure in several parts of Goa affected by the cyclonic weather.
Particularly badly affected were Bicholim, Anjuna, Mapusa, Karaswaddo, Tivim, Colvale, Siolim, Sal, Raia, Rachol, Curtorim, Bali, Cuncolim, Sanvodem, Sanguem, Quepem and Curchorem areas. He said all line staff had been on the job since Oct 2 and despite the public holiday they had been carrying out repair work to restore power to affected areas.
Goa is still a long, long way from solar power and still depends on two electricity grids, one supply coming from Maharashtra and the other from Karnataka, the southern supply is fine but the northern grid still falls short in providing power And then there is the story of power theft which is not so high in Goa at 16% to 18% during distribution (in comparison to other states). The loss can be reduced by 6-7% with better planning. In his opinion is not all that well-endowed a state as people outside Goa think. A lot of infrastructure has to be put in place in Goa yet.
The power minister appealed for a few months, one-and-a-half to three months to sort out major power glitches and soon, he promised, there would be a study report on power tariff differences between domestic and industrial consumption and necessary changes would be made all round for more effective power supply. He also urged consumers to regularize their excess load or the department will have to send its officials for personal inspection and verification of power consumed.
According to him the power problem in Goa will ease considerably once the commissioned substation worth `1,600 crore with a capacity of 400 kilowatt transformer is fully set up and made operational at Dharbandora.
Round the clock power supply across Goa is new Power Minister Nilesh Cabral’s dream and he is working on it. For the time being he ruled out any increase in power tariff.

GOVERNMENT COLLEGES LOOKING AHEAD!
Students of the Government Colleges in Goa Sakhali, Quepem, Khandola and Margao have something to look forward to. The four colleges are all set to be equipped with Smart Classroom facilities from the coming academic year.
The smart classrooms concept involves four components – an interactive board with in-built software of the respective subjects, a document camera that will help magnify documents or notes, touch-responsive tablet or pad that will reflect movements made by both, teachers and students onto the interactive board and an e-podium which will facilitate convenient means for storage of inputs from audio and visual equipment.
“With the launch of this concept, teachers will not be permitted to teach in the old style using blackboards and with students taking notes,” Higher Education director Prasad Lolayekar said. He said the faculty at all the colleges will be adequately trained.
Sources said the proposal will help students develop an interest towards technology-based education and also train teachers in the use of computer technology and assets-based teachings such as a projector and video conferencing.
A tender for establishment of classroom studio(Smart Classroom) at government colleges has been floated by the Directorate of Higher Education today. Last date for issue of tender document is Oct 16.

Citizen Service Centres TO BE SET UP BY GEL