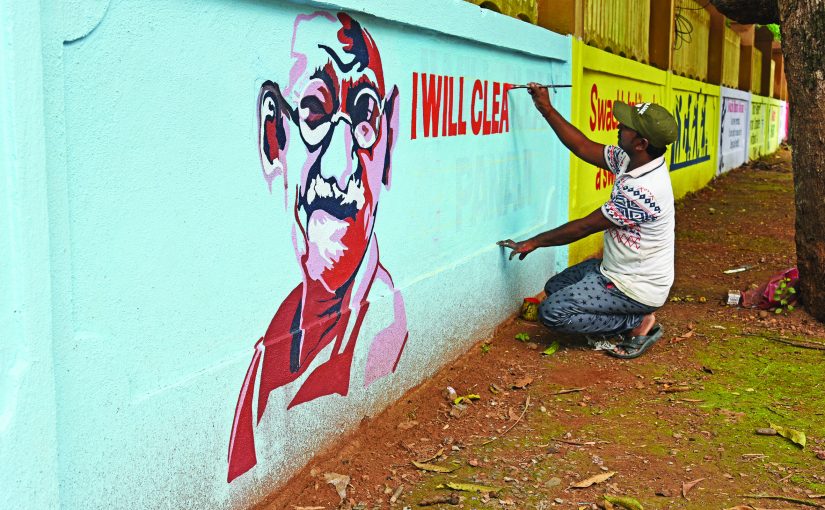 IN THE NAME OF THE MAHATMA

QUEST FOR SWACHHATA: The fire brigade parade ground compound wall in St Inez got a face lift with bright new paint and the Mahatma beaming out at places. Slogans and encouraging messages were also painted on courtesy the PWD. Hopefully this will encourage those walking past not to litter or spit

ON October 9 I had a shocking experience in GMC. I was waiting to see a doctor in the Neurosurgery OPD around lunch time.
Some patients there claimed they had been waiting since five in the morning. Although many of the doctors are very dedicated and were clearly going to be skipping their lunch break, it was clear that the number of neurology patients in Goa is fast increasing.

I took out my phone and told my daughter to take a short 5 second panoramic scan of the room thinking it would be an
interesting human-interest story. Immediately some security guards appeared out of no where and ordered her to delete the ‘video’ threatening that she would be arrested before she even had a chance to ask anything.

I was surrpised because I recently did a story on the GMC and took multiple pictures and even spoke to the security in charge
at the time. I told the security guards that the in-charge knew I’ve been taking pictures and that there’s no such rule. They
returned with a policeman who took me to a doctor who confirmed that there has been a circular against photography issued
recently (after my article appeared I’m guessing).

I have two issues with this. Firstly, the circular is not displayed anywhere. When I asked to see it I was told I would have to
accompany the police officers to the medical supritendent’s office. As I had a patient with me and we had already been in line for about three hours at this point I refused to go along as I was expecting to be called in to see the doctor soon. How is the public going to be aware of this ridiculous rule?

Secondly, I fail to see by what authority the public can be stopped from taking pictures of a public hospital like the GMC.
There are several issues that have been resolved only because they got highighted by citizens and the media. Why stifle this
feedback? Shame on the administration for running scared from public scrutiny!
— Stephen Dias, Dona Paula

SALUTE, CONGRESS!
SALUTE to Rahul Gandhi for exposing BJP crooks and criminals who’ve looted India. It is true what he says, poor farmers are
dying, unemployment is killing youth and just see how this BJP is fooling the nation and robbing it. Modi was supposed to recover black money loot and deposit in each and every Indian’s account an amount of Rs 15 lakh. Blind BJP bakhts are still waiting for this Rs 15 lakh. As responsible citizens it is our duty to expose crooks and criminals in the BJP!
— Kenneth Silveira, Vasco da Gama

POLITICIANS’ KIN
THIS latest case of that very glaring rash and negligent driving in Belgaum by the son of Aldona MLA Glen Ticlo, leading to
the death of a young girl, is only another instance of sheer abuse of power by the kin of our already power-intoxicated arrogant rulers.
Chief Minister Manohar Parrikar’s two sons Utpal and Abhijat have both been relatively well-behaved. But the astronomical assets acquired by them during the spell when their dad has been chief minister and for some time the defense minister of India has raised too many eyebrows. Less said the better on how that mutation was done overnight for the younger son of Manohar Parrikar who acquired massive property at Netravali in Sanguem under questionable circumstances.
We need to commend Goa’s second chief minister, the late Shashikala Kakodkar, for having ensured that her three sons Yatin, Sameer and Abhay were all brought up as normal kids, never ever pampered or allowed to play truant, unlike most children
of today’s tribe of politicians, many of whom have been indulging in various nefarious activities, while they have been ensured of immunity to the rule of law by their politically well-connected dads.
— Aires Rodrigues, Ribandar

RED FACED AND STINGING!
Dailies reported BJP Chief Amit Shah championing fake news to help the BJP cause citing many such instances! Next, a senior
BJP leader and Union Minister disclosed how the BJP won the 2014 elections! The BJP considered themselves as a lost cause
to win the same so they decided to give tall promises saying they would lose and therefore they would never have to deliver!
After winning they were unable to keep the promises which is there for all to see. Even after promising the moon, they still did not expect to win. Imagine what they must think of the voters who voted for them! The puzzle pieces are now falling in
place. After the ‘surprise win’ they were nonplussed on how to govern having side lined Advani and Vajpayee. They started
pampering their workers with ghar wapsi, beef ban, cow vigilantes et al. They looked at the past Congress rule for pointers that could help them. They recalled the rise of local beverages like Thums Up and set out against Nestles. Thus rose Patanjali out of nowhere. They saw the effects of the emergency and start intitiated the clamp down on media and free thinkers. They looked at Bofors and replicated Rafale. Manmohan Singh was silent as he had no worthy opponent capable of comprehending
matters; the BJP PM maintains the same silence even remaining out of the country to avoid speaking. The only difference here
is the BJP is doing this with pre-meditation.
— R Fernandes, Margao

DISPROPORTIONATE PRICES OF PETROL
The relatively high prices of petrol at present just does not seem to be logically right. Consider that the price of crude oil in the UPA regime had reached a high of $140/barrel. At the then conversion ration of dollar to the rupee which was $1=Rs
65, the calculated cost in rupees of one barrel of crude oil was `9,100. Considering that one barrel of oil contains 165 litres of crude, the price of one litre of crude then was `55 per litre. Now the price of a barrel of crude oil is $86 and the conversion ratio of dollar to the rupee is $1=Rs 73. Thus a barrel of oil costs now only `6,278 which means that one litre is only `38. Add to that the cost of fractional distillation of crude oitl and taxes and what we have is that now a litre of petrol should cost now less than it used to cost during the UPA regime. However, it is a travesty that a litre of petrol now costs above `80 per litre and during the UPA regime it was just about at the most `70 per litre. Does this calculated argument absolutely conclude that distillation charges and taxes are so much more now than during the UPA regime, that petrol as well as diesel and aviation turbine fuel (ATF) are become so much costlier? Why this disproportionate relative higher prices of petroleum products?
— Elvidio Miranda, Panjim