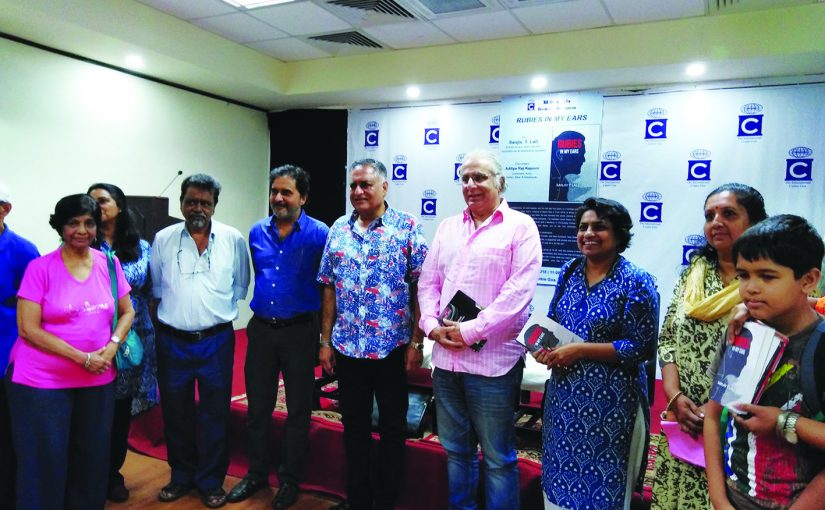 Book presentation at the ICG: A friendly group picture with author Sanjiv T Lall (Fourth from left, printed shirt), next to him is Aditya Raj Kapoor and group of friends including poet and editor Manohar Shetty (Second from left, who edited ‘Rubies In My Eyes’)

THERE’S something very disarming about this debut book by one Sanjiv T Lall. He is settled in Goa currently although nobody knows for how long his many muses will keep him here. From the sound of it here is an original rolling stone who gives a damn about whether he gathers some moss or not. Lall was at the International Centre Goa on Sunday morning Oct 20, 2018, for the release of his intriguingly titled book `Rubies In My Ears’ and in person he did sport little glowing emeralds in his ears (for a change presumably).
The person who conducted the tête-à-tête with him about his book was long lost and re-discovered friend, Aditya Raj Kapoor. Reportedly, the two had studied together and met up 30 years later. Aditya Raj Kapoor is late film star Shammi Kapoor’s son courtesy Geeta Bali and his brief describes him as “consultant, actor, author, biker and adventurer”…let’s say they’re friends made for each other in spiritual kinship.
Aditya injected some hype into the occasion of a first book release for his friend. Sorry, not much of an audience but what they missed may be made up for by getting a copy of the book `Rubies…’ to read. Truly it is said that there is a book waiting patiently or impatiently in all of us to see daylight…for come lately author Lall this seems to be so.
When I put in a request he without much ado presented me with a signed copy of his book for reviewing (these are times when nobody gives books for review without making a song and dance about it!). I’d just confided that my office is not going to refund me any money for buying books to read and he just obliged generously. There are no anecdotes to do with rubies in his book so I guess it’s just an off the cuff catchy title for a book which kept me captivated with the straightforwardness of its style, a story of a young man who instead of fulfilling any family obligations of joining the defense forces (seeing his father was a war hero in the army) just had a yen to wander the world picking up jobs whenever he needed money to move on.
His passion for moving on to stay alive and kicking was the raison d’etre for any job hunting he did at various stages to augment his funds — he did work at varied jobs with visa or without visa, made friends across the world in places like Tehran in Iran, Singapore, Auckland in New Zealand and elsewhere, and now he is in Goa where he is restoring old Portuguese heritage villas and World War II and Willys Jeeps.
Say ‘Rubies’ is an amazing story of someone who didn’t lack family and background but who preferred as much to chase life as let life happen to him with its ups and downs… some glorious innings too. Perhaps the idea is not to live life in linear boring ways but ride the highs and lows sportingly. It is an inspirational story of a perennially adventure seeking single man at heart — despite the captivating women he lived with briefly or for long spells, but eventually let go for he found it too hard to be around forever! A true blue philanderer? Maybe, but our hero doesn’t come across as a jerk, the partings he confides in his book were amicable and he’s friends with his ex-partners in life.
`Rubies…’ is a travelogue in more than one sense because as Lall recounts his humdrum, sometimes annoying experiences, while travelling the world, he is also sharing the inner travelogue of his life and in the end advises, `For those of you who do not know what you want to do in life, take heart and be gentle on yourself. There is still time. Be patient, your day in the sun will surely come….This book, my story, is especially for you.’
In the reading of `Rubies…’ one gets a message of some value and that is perhaps the travelling we do inwardly within ourselves is as important as the travelling we do on ground to be true to oneself! The book is a compellingly easy read, it reaffirms that some of the best education is in travelling at home and abroad. It educates the mind, heart maybe and definitely the soul (if you believe in a soul).
The message coming clearly in this story is to stay safely anchored or pull anchor and take your chances…but be true to yourself if you want no regrets later on in life as it fades to closure. I would say `Rubies…’ is a book for our times.

Excerpted from ‘Rubies In My Ears’ by Sanjiv T Lall…

Hong Kong
After my Redic stint, I went to Hong Kong looking for a job. Hong Kong is a bustling city, full of energy and vitality. I took a furnished studio apartment on the side of the river, giving myself one month to find a job.
In the evenings, I would often go to the street close by, full of strip clubs. I would generally frequent one place where I had become friendly with the owner, a Chinese lady in her early 30s.
Seven to eight pm was always happy hour. If I got there in time, I would save a heap of money. I would generally sit and chat with the manager at the counter and tell her what I did for the day. One day, she invited me to her home for dinner. It was a tiny Hong Kong style apartment, small but compact, which had everything the lady required. On another occasion on the weekend she drove me to the New Territories, to a sophisticated new shopping complex.
One day, when I was coming down the lift from my seventh-floor apartment, the lift stopped on the fifth floor and a Filipino lady got in. “Hello,” she said, “are you from India?”
“Yes,” I said, I had my room key in my hand. She saw it and asked, “Are you in room 732?”
“Yes,” I said.
“Okay, bye, might see you later,” she said, and she was off. I thought nothing of it and went on with my day. At night, I went to my usual bar, had a couple of drinks, had some dinner and came back. Soon I was fast asleep. I could hear someone knocking on my door. I thought it was a dream. The knocking continued, till I suddenly realized that the knocking was for real.
I got out of bed in my long knee-length kurta that I used to wear to bed and opened the door. I found the same Filipino girl, who had got into the lit with me in the morning. Standing at the door. It was 2 a.m. I was half asleep, not quite sure what was going on. “Hello,” said the girl, “I am so sorry to wake you up.”
“What do you want?” I asked. “It’s so late.”
“Yes, I know,” she said, “and I apologize. I have no other place to go. Can I sleep in your room for the night?”
“Sleep in my room?” I asked, somewhat bewildered. “I only have a double bed, not even a sofa. I only have a chair.” I was trying to discourage the girl.
“I know that. I will sleep on the bed in one corner, you will not even know,” she said and with that she just walked past me.
I did not quite know what to do, so I just sat on the bed, wondering what I should do. The girl by now had disappeared to the toilet; the first thing I did was to hide my passport and wristwatch below the carpet, behind the dresser, and lock my suitcase. The girl came out, wearing a nightdress; where that came from I do not know, but she claimed that she had it in her handbag. She went to the far corner of the bed and lay down. Within minutes she was fast asleep!
I put the big bolster cushions in the middle of the bed, lay down on my side and went off to sleep. I swear, the whole night I was sleeping with a girl in my bed, I did not touch her. I did not know why she was there. I reasoned something must have happened to make her do what she did. I left it at that.
The next morning, she got up, showered, got ready, and left, as if it was the most natural thing to do in the world. I gave full marks to the girl, she did what she had to and carried it off with aplomb.
I must say I was also rather proud of myself that I did not touch her or make any advances. I never saw the Filipino girl again. Actually, to be quite honest, I was not even certain that she was a Filipino.