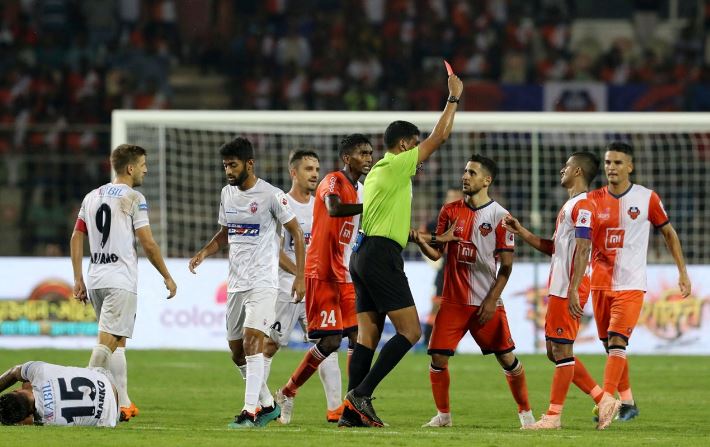 RED CARD: Coro’s red card in Sunday’s game has already proved disastrous against Jamshedpur FC Goa Coach Lobero will be hoping the team is able to return to their winning ways even without him

FC GOA is having the best of days and the worst of days. In the past seven days they have seen a fantastic win at home, beating FC Pune City 4-2 at the Jawaharlal Nehru Stadium, Fatorda on October 28, only to crash to a 4-1 defeat to Jamshedpur FC at the JRD Tata Stadium on November 1.
Sunday’s game was a goal fest in the first 45 minutes with Coro opening the scoring in the 5th minute and FC Pune’s Marcelinho levelling things up three minutes later.
In the 12th minute, Hugo Boumous delighted Goan fans by putting Goa back in the lead again and Jackichand sealed the deal, doubling the lead in the 20th.
FC Pune gave it’s fans some hope when Alfaro scored three minutes later, but Coro scored the 4th Goan goal before half time. The second half was goalless, but not for lack of action.
However the biggest talking points of the second half were not goals but two red cards.
First, barely 20 minutes after he came on, FC Pune’s Diego Carlos gave Goa’s Seriton what seemed to be a vicious kick. A blatant foul that deservedly earned him a red card. With about 15 minutes to go Goan fans were delighted to see him sent off and hopes of a fifth goal were high.
Unfortunately, less than 10 minutes later fans were shocked when Coro was also sent off with a red car after going over the ball and catching Stankovic with his studs.
Coro’s loss was keenly felt in Thursday’s game against Jamshedpur FC.
The home team took an early lead, with Michael Soosairaj drawing first blood.
Goa hit back through Fall, who headed a free-kick from Hugo Boumous past Subrata Paul. Jamshedpur had the lead back soon after half-time when Seriton Fernandes made a mistake with a through ball, deflecting it onto the path of Soosai, who pinged it above an onrushing Mohammad Nawaz.
Two quick goals in the 77th and 79th minutes sealed the deal for the hosts. Memo’s scorching strike was followed by a 4th goal by substitute Sumeet Passi.
Goa’s coach Sergio Lobero said this was the worst performance since he joined FC Goa but as always refused to blame Coro’s absence for the loss saying the entire team has to perform better.
FC Goa face Delhi Dynamos FC next at home on November 8.