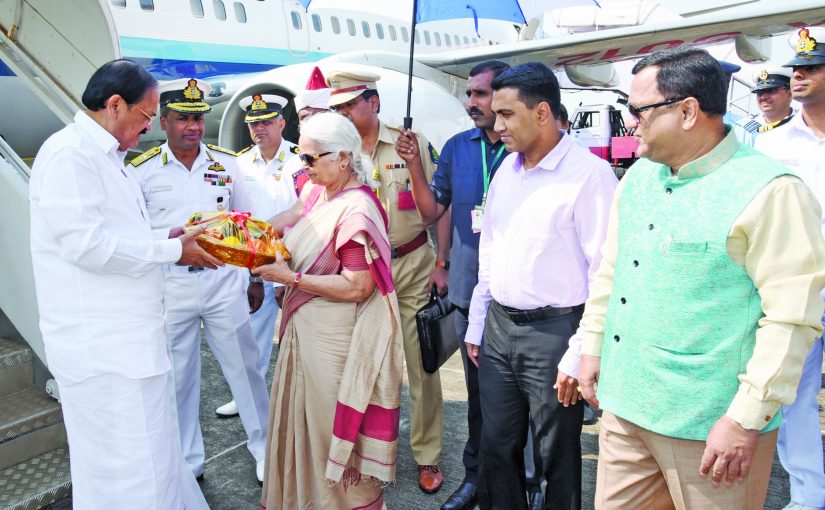 THE anti-defection law had to be made to ensure politicians do not jump parties after elections. But the recent Goa Assembly shenanigans has put paid to this and the public is hapless.
The FSSAI has laws in place to tackle food adulteration and the BJP now wants to open labs to test fish imported into Goa, not so that people have safe, nutritious food but rather to acquit the culprits poisoning the entire state! So a new law is made for all fish to be tested in labs. This is our politicians’ moral values! What it means that laws may be subverted and there are rewards too.
What option is there for the righteous? The laws passed by the legislature are made with loopholes. This trend of subverting the essence of laws has become a way of life. Which citizen has come out and told the MLA to his face that what he is doing is totally wrong and despicable?
The public needs to make its own agenda and hand it to anyone contesting the 2019 elections. The first two agendas are there for the asking which need to be made legal. We should demand the laws we need instead of leaving to the legislators who are morally and every other way corrupt.
First: Any MLA resigning from Assembly for any other reason than health grounds should get no pensions. Second: MLAs not medically fit must resign. Third: MLAs may be chief guests only for government sponsored events and not educational or social functions.
I do not think citizens will have any objections to this. We can make up this list before 2019 and when your sweet talking political candidate comes at your doorstep hand him a copy of the agenda and get him to sign it. If he refuses, give him the thumbs down. Elections are about what we want and not what politicians want! Are we always going to allow ourselves to be at the mercy of our unscrupulous scoundrels?
The power is with the people. Don’t sell it! Don’t sell it by calling ministers as chief guests of functions just for ego’s sake or sponsorship money for tournaments, etc. Stop making MLAs feel important. Treat them like VIPs and you give them license to control anything and everything and put his/her finger in every pie. When elected they do not acquire supernatural powers or super intelligence to be judge of anything and everything.
— R Fernandes, Margao

ECONOMIC DOWNTURN
A GLOBAL and fast spiraling down economic meltdown is looming ahead and the kind we’ve probably never experienced before in the history of the world. Consider the following figures that are startling but true. The Shanghai Composite Index, China’s benchmark stock index on June 12, 2015 was 5,166 points and it plummeted to a 50% low of 2,568 on Oct 15, 2018.
Since the beginning of the American trade war, the market capitalization of China has fallen by a whopping $3 million in the space of only six months. India too has not been insulated from this fall but the Sensex has lost a sizeable $262 billion from August till date this year.
All is not well in the Indian stock markets too. The costliest stock in the Indian market is a reputed tyre manufacturing company whose stock value has plummeted from an all-time high of `80,000 this year to a low of `62,000 which means a fall of more than 15%.
While the automobile industry was growing rapidly, all also is not well for the Fast Moving Consumer Goods (FMCG) sector with the biggest company in India registering a fall of 20% in the recent past and this too a company which is manufacturing essential goods for everyday use.
People in India initially were traditional and invested their hard earned earnings in bank fixed deposits but since bank rates too decreased to 6.5%, most people withdrew their money from fixed deposits and reinvested it in mutual funds.
However, most of the mutual funds both equity based and balanced funds have registered losses of at least 15-20% .The yearly returns of a mutual fund which was equity based had reached a high of 50% this year but today in India no mutual fund across all types has registered a gain of more than 5%. The investors have been caught in a quandary as to whether to redeem their mutual funds or whether to wait until better times come, but this seems to be a bad dilemma which they will have to address in order to reduce their losses.
The recent hike in crude oil prices which at the moment is $80 a barrel and the fast depreciating rupee which is now pegged at `74 to the dollar is casting doubts on the Indian economy.
Add to this the woes of the public sector banks which might have lost as much as 10-15% of its value and what we have is a recipe for disaster.
At the moment the world economic scenario is not supportive for even an immediate work up.
— Elvidio Miranda, Goa
THANKS, WHATSAPP!
MY sincere gratitude to WhatsApp headquarters in California for having late in the night acted swiftly to restore my WhatsApp account which was blocked and banned on Tuesday this week at the instance of a senior Goa politician. Having lost WhatsApp for 24 long hours was so daunting.
I explained to WhatsApp that I have at no time violated any of their terms of service. If anyone who has crept into my contact list is unable to digest what I write, I would humbly request him to unfriend me or alternately block me as a result of which he would not be burdened with any of my messages.
The BJP at Goa in 2012 and Narendra Modi in 2014 at the Centre rode to power optimizing the use of social media. This very same BJP is now trying to ensure curbs on social media to suppress and muzzle freedom of speech. The power to dissent and constructive criticism of any government is vital to the very function of democracy.
In recent years social media has transformed and drastically enhanced our power to communicate instantly across the world. Through WhatsApp, Twitter, the various groups on Facebook, besides other global networking sites that I am enrolled with, I am able to communicate by sharing a message or thought with over 20 lakh people. Thank you social media. It’s an amazing world!
— Aires Rodrigues, Ribandar