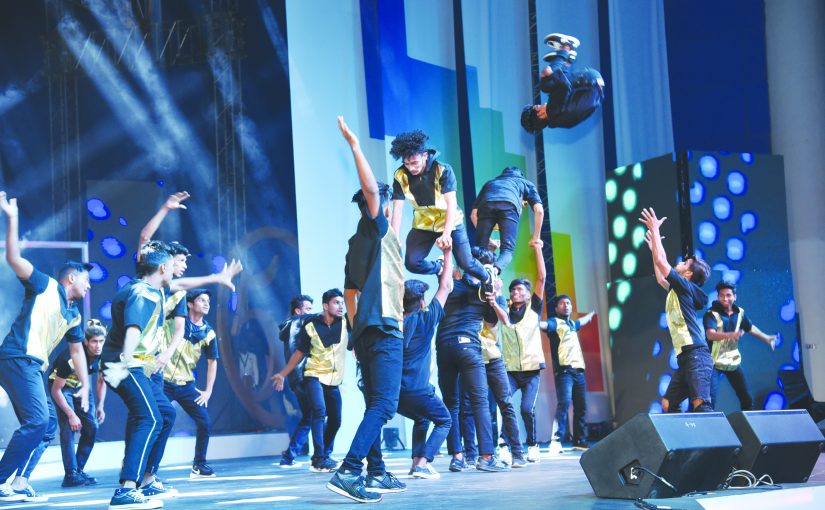 XIX EXCITES: The daring and super-enthusiastic dance act by XIX group on songs such as “Gajanana” and “Malhari” gave a brilliant start to the closing ceremony of IFFI 2018. The young performers thrilled the audience with their coordinated moves and daredevil manoeuvres, and set the bar high for the rest of the evening!

Nobody will agree with our DGP Dr Muktesh Chander’s statement that the ‘short tempered police personnel’ are on account of ‘defects in training’.
It is no secret that like all other government jobs, the recruitment to the police force has not been on merit but solely on political patronage, with most police personnel from the constabulary to the officers rank having paid a huge amount to politicians for manipulating their selection.
Besides, in rank contravention to the mandate of the Supreme Court that the working of the police should be free from any political machinations, we have seen how Chief Minister Manohar Parrikar has over the years been virtually running the police force while misusing the Crime Branch and the Anti-Corruption Branch as his weapons to merrily target his political opponents. Contrary to law, the ruling Ministers and MLAs are able to get officers of their personal choice posted in their police stations.
It is pertinent to also note that the police personnel in Goa are being made to work very long hours amidst pathetic and very appalling working conditions. On account of the long hours of work related stress, a lot of the police personnel are grappling with serious health problems like hypertension, diabetes and depression. The working and living conditions of the police at some of the police stations and barracks is so very inhuman.
Our DGP Muktesh Chander must with a very heavy hand stem out the current political interference in the working of his force while also ensuring that the police personnel, especially the constabulary, are treated in a very humane way. Only then will we have a very professional police force and the much needed good policing in Goa!
— Aires Rodrigues, Ribandar

FIRE DANGERS STALK
NOT-SO-SMART PANAJI
In quest of making Panaji a smart city, one of the most fundamental issues is relating to safety of the city from the hazards of fires, since most of the buildings and old houses do not have any fire safety measures. Only a handful of buildings in the city have elaborate fire safety mechanism in place. These buildings have fire hydrants and even portable fire extinguishers of different types like dry chemical powder and carbon dioxide based canisters. Sprinkler systems are almost non-existent.
In our NIO Research vessels the fire extinguishers are approved by MMD (Marine Mercantile department) in lines to SCI (Shipping Corporation of India ).
It would be a first to have a Ministry & Department of Fire Safety and Emergency services in the GOA Government that will check each and every building and house and conduct an audit and detailed study so as compile a safety measure action plan to equip and identify those issues that will prevent fires.
Also buildings and houses that do not have fire extinguishers can be fitted with smoke and fire sensor detectors with alarm systems that will be able to give an early warning of fires in the making. The costs for these fire sensors can be borne by the house owners if they are not equipped with fire extinguishers.
Fire Safety in the city should be a fundamental necessity. Petrol pumps and large godowns should be equipped with comprehensive, elaborate and foolproof safety measures.
— Stephen Dias, Dona Paula
BUS FARES GO UP TOO!
The Government of Goa has decided to increase the bus fares and the minimum fare will now be `10 in place of `8. While the official notification may be issued at any moment, the passengers will now have to bear the burden of the increased fare. The Motor Vehicles Act specifies that ticketless travel is an offence. But except the buses of the government-run Kadamba Transport Corporation, no tickets are issued in any buses of Goa. Further, the passengers are crammed in the buses like sardines and the bus conductors (cleaners) are also uncooperative. Senior citizens, including yours truly, have often regretted travelling on a bus.
A few weeks ago, Director of Transport Nikhil Desai participated in Doordarshan Panaji’s ‘’Hello DD’’ programme, wherein the commuters conveyed to him a litany of problems faced by them in buses. I hope that at least with the increased fare, the drivers and cleaners will be more courteous to the passengers. The mandatory issuance of tickets should be enforced by the Transport Department.
— Vikas Kamat, Margao

DOUBLE VOTES and NO VOTES
The motive of one person, one vote has at last materialized for those living abroad and who are in possession of Portuguese Bilhete de Identidade or the now electronic version, Cartao de Cidadao.
Thus those now in possession of the Bilhete or Cartao will be able to vote in Portugal for elections, physically or by postal ballot as well as be included as Portuguese citizens in the census. This decision by the Portuguese government is welcome news for Goans who are living abroad and most of them can now be part of the political process in Portugal.
However, a few questions have to be asked about this new regimen. It is known that a few Goans, especially the affluent ones, have a Cartao de Cidadao and spend most of their time in Europe especially Britain, but since they do not possess the Portuguese passport, they are now in a position to vote in Portugal, being in the UK as also vote in Goa since Cartao holders do not have their names deleted from the electoral rolls in Goa.
Also there are many Goans who made their Portuguese passports and whose names have been deleted from the electoral rolls in Goa, either since they could not cope up with the strict work regimen in the UK, or due to health reasons, they had to come back to Goa. They are thus disenfranchised both in Goa as well as in Portugal since they have made their permanent residence now in Goa.
Do there have to be chinks in the armour of every law?
— Elvidio Miranda, Goa