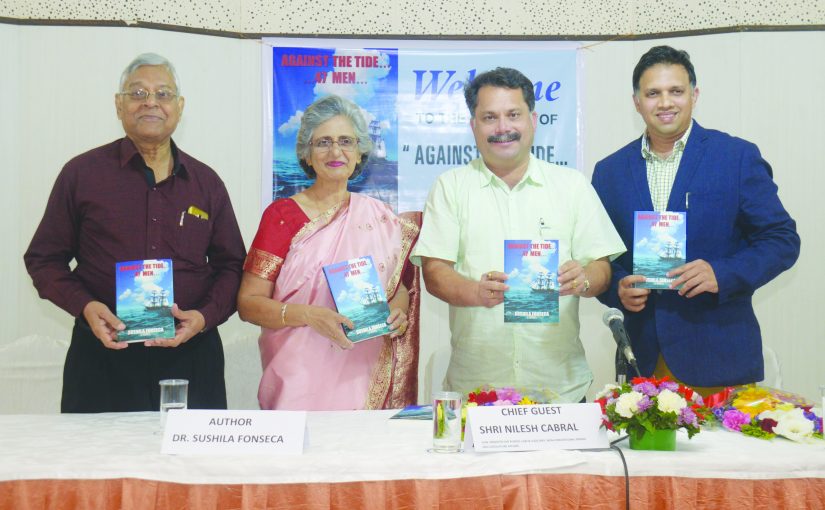 AUTHOR: Power Minister, Mr Nilesh Cabral released Dr Sushila Fonseca’s ninth book titled “Against the Tide…47 Men” which is a fictionalised novel on the Pinto Revolt of 1787 in Goa, against Portuguese rule. Also present at the function on December 13, 2018, were Dr Eduardo Fonseca and Mr Harshvardhan Bhatkuly. Dr Sushila Fonseca, the founder of the Dr Fonseca’s Pathology Laboratory, Panjim, has worked closely with issues pertaining to the youth and many of her books deal with topics concerning the youth

THE recent results of five State Assembly elections have not just thrown up a loss for the BJP. It has done more. It has brought a personal triumph for Rahul Gandhi. It is now common knowledge that there was a massive hate and ridiculing campaign, both paid and otherwise, by massive teams on social, print and digital media targeting the Congress president.
This went to the extent of suppressing anti-BJP media, buying other media and hiring trolls to target anti-BJP activists. The latter has exceeded all norms of decent behaviour. With key BJP leaders themselves admitting the BJP came to power unexpectedly and actually had no inkling on running the country, they used their entire resources on the maligning campaign.
With almost every WhatsApp-user bitten with the bug to “forward after reading” the maligning Rahul Gandhi and Congress campaign surpassed all former known propaganda. Despite all this, with many in the Congress themselves silent, the Congress president kept on fighting and has now been vindicated.
Dynasty politics is to be condemned. There are many capable leaders outside the Nehru family. However, these leaders should not look just for a baton change when they are on top, but must prove their mettle when things are down. Now was a good time to prove themselves: Yet they preferred to let their president absorb all the flak.
The last time Congress was defeated by the BJP it was only Sonia Gandhi who could really rally the people and wrest back power to finally even forgoing the PM seat. The report card of the BJP is all red and the country has suffered on all fronts including economic. Indian cannot afford the same mistake in 2019.
— R Fernandes, Margao

FLAILING FORTUNES
THE invincibility of Narendra Modi has been shattered, as his allure in the eyes of the common man has dimmed considerably having been rebuffed in Chhattisgarh, Rajasthan and Madhya Pradesh. A much more matured Rahul Gandhi has arrived on the scene to stake his claim to be the next prime minister of India with a resounding performance, by beating the incumbent BJP in the three states despite the incumbency advantage and BJP having wielded money and muscle power that was rejected by the people of India.
Mamta Banerjee’s address to the nation that an economic emergency should be clamped down in India is an ominous sign. The much touted economic revival of India is just a myth with public sector banks and public sector units showing a drastically downward trend in profitability. Even Urjit Patel’s submission of resignation as RBI governor nine months before the end of his tenure is an indication of his dissatisfaction at the way the govt has been forcing the RBI to play to its tunes.
It’s a clear message that all is not well in the financial management of India. The drastic fall of the stock market in India too has sent shivers down the spines of foreign institutional investors and as Christmas time approaches it seems that a net outflow of foreign investment will also follow.
Besides on the day of counting the rupee depreciated a massive 110 paise, before recovering partially, and portents bad times to come. Rahul Gandhi can calm economic fears by announcing measures to bring a much needed accountability and responsibility, coupled with much needed integrity that is lacking. It seems as if Narendra Modi’s role as a good orator, short on action for the benefits of the masses, is now coming to an end. India needs a steady hand to guide its flailing fortunes.
— Elvidio Miranda, Goa

TRIPLE TALAK!
Voters have given a triple talaq to BJP in the just concluded assembly polls. Now the top two BJP guys should take the blame for the loss, just like they used to take the credit for success. Development and only development matters to voters and not stupid regressive, divisive issues. The PM may be semi-literate but the voters of today are not. The assembly results are the proof!
— Vladimir Furtado, Panaji

GETTING IT STRAIGHT
WHO appointed Urjit Patel? Narendra Modi. Why did Raghu Ram Rajan step down? Because Modi and his govt would not act against NPA companies. And also because draconian demonetization was being planned.
Why did deputy RBI governor Viral Acharya raise the issue of Section 7 of RBI Act and warn the govt? Because govt wanted to step in and take over the reserves of `10,00,000 plus crore lying with RBI and use them to plug NPAs. Why does the govt want all this money? Because banks have been rendered empty and the `4,00,000 crore windfall gain from demonetization never happened.
Why are companies declaring NPAs? Because their businesses failed due to the failing economy.
But is the economy not doing very well under Modi? If that was the case, there was no need to take over RBI reserves. The story about the economy doing well is a fake story like everything else told to you by Modi.
What triggered this takeover bid of RBI reserves? Because many companies were declaring NPAs and the biggest shock came when IL&FS declared (officially) an NPA of `90,000 crore. And none of the directors were arrested.
But why take over RBI reserves when it had already paid a dividend of `58,000 crores for the last fiscal? Because that was not enough to fill the holes created by businessmen who lost money.
Why does the govt require so much money? Because GST has failed. From the expected collection of `1,30,000 crore per month, it is only collecting `90,000 to `1,00,000 crore with `30,000 crore going back as refunds. Every month there has been a deficit of `30,000 crore on average.
Why has GST collection fallen? Because it has been declared by IMF as the most complex form of taxation in the world and Indian businessmen have found ways to avoid it. Also business volume has fallen as the economy has failed.
Why has business volume fallen? If you withdraw 83% of blood of an economy for two months and then take six months to pump back the blood, you can’t expect the person to get up and start running as if nothing had happened. Demonetization was such a blunder. It killed the economy and India lost 2% of GDP, which is approximately `3,00,000 crore. And the losses continue.
What is the immediate danger? Telecom sector, that has seen mergers now has three players, Airtel, Vodafone Idea Ltd and Jio and all three are bleeding. Telecom sector is sitting on `8,00,000 crore possible NPA as estimated by SBI internal report with was later suppressed.
What about the GDP figures that show NDA-2 doing better than UPA-2? Former CEA has already spoken on this and revealed how the Niti Aayog changed the figures and how to make NDA-2 look better they made UPA-2 look bad. They just drew a bigger line next to the UPA-2 line.
Who is responsible for all this mess? Of course Pandit Jawahar Lal Nehru is responsible for all this mess and his family. They have not allowed Modi to do anything in the last 56 months. Had Sardar Patel been the first prime minister, none of this might have happened.
Who should resign? That’s a stupid question!!! Of course Sonia Gandhi should resign and Rahul Gandhi should resign as Congress president and Modi should be given a free hand with the `10,00,000 crore RBI reserves.
Who should you vote for in 2019? Of course Narendra Modi, because he is the 11th incarnation of Lord Vishnu. He is the saviour of Hindus. He is the only person on the face of earth who can teach Muslims a lesson. He is the only person in India who can protect the cow. He is the only person in India who can take care of the poor, marginal soldiers and veterans. He is the only person in India who can build the Ram Mandir. He is the only person on earth who left behind his wife and family and even his mother and the only person who himself lives on 10 acres of prime property, protected by five layers of security, while his 90 plus years old mother stands in bank queues to withdraw `4,000 as per demonetization rules along with a camera crew. He is the only PM who has travelled the world and done so many town hall and rockstar type shows. He does Mann-Ki-Baat every month on radio and it is broadcast on television too. He is the only person who can buy 36 jets instead of 126 jets by paying the same price and convince you without giving you any data that 36 > 126 and he has in fact saved money for the nation and yet managed to give `30,000 crore to friend Anil Ambani.
Because there is no other idiot in the whole country who is more qualified than him with his MA in “entire political science” and a missing BA. Now how dare you think of voting for anyone else?
— Eric Pinto, Goa