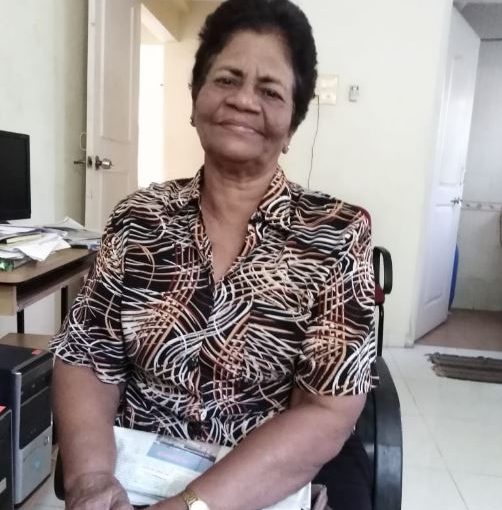 Christmas is here and the one person to meet for some words of wisdom is Ruth Henriques. A most down to earth woman who loves to write poetry and short stories from her life. She called at the office of the Goan Observer to wish us merry Christmas and gift us with her two slim books `Thistles and Blooms’ and `Tidbits, From Now and Then.’ They contained some of her writing in Konkani, English and Portuguese, she said.
Writing came to her after her husband passed away and she wanted to get out of her depressions, she says, “I was a high school teacher and wanted to keep on writing with everyone’s encouragement…the pen is definitely mightier than the sword, and writing came to me naturally when I never even knew I could write!” She was born and bred in Seraulim and after marriage shifted to Vasco da Gama, the mother of three children, she quipped with a sense of humour, “They are all in their 30’s and nobody wants to get married!”
Of course, she says, life is always full of problems but it is important how we deal with them. Ruth’s favourite belief is “Success is not final, failures not fatal!” Also, “God’s ways are not our ways. He knows what is good for us!” She imbibes all this in a spirit of gratitude and makes the most of her family, friends and well-wishers and to pen down something whenever she feels like it.
Ruth Henriques’ visit charmed us and turning the pages of her two slim books we found a Christmas story which touched our heart the most.

It was Christmas Eve. The atmosphere was charged with excitement, expectations, goodwill and cheer. People were busy setting up cribs, decorating Christmas trees, fixing up stars, churches and other public places were being brightly illuminate. One could hear Christmas carols being played somewhere on a CD player. Shops packed with goodies, gifts and decorations were making brisk business with late shoppers.
Joanna was giving finishing touches to her dress which she herself had stitched. It was her son’s gift from his first salary.
Life had been rather difficult after her husband’s death, five years back. A high school teacher, he was killed in a tragic scooter accident, leaving her and their son, still in high school, almost in penury. Joanna was determined that he should complete his education, come what may. She took odd jobs like accepting orders for stitching clothes, baby-sitting, etc. David, her son, responded to her sacrifices and soon graduated as a software engineer with flying colours.
Joanna was happy and had planned to celebrate Christmas like in the old happy times. She had prepared traditional sweets with the help of a neighbour on the previous day. An artistic crib, a beautifully decorated Christmas tree and a huge star made of bamboo sticks in front of the veranda gave a festive look to their house. It was all David’s work. Now he had gone out saying that he would return soon in time to take her for midnight mass. She was so proud of her son. He was handsome, smart and kind. In spite of holding a good job, he was very unassuming and ever ready to help others. He spent some of his time with youngsters in trouble. One of them was
Seby, his classmate in early school days. A product of a broken home with parents, separated and now living with different partners, he was starving for food and love. Soon he became a school dropout and was used as a drug peddler. It was a paying, but very dangerous job. David had persuaded him to give it up, but with little success.
It was past 11 pm and David had not yet returned. Joanna grew a bit apprehensive. Just then there was frantic knocking at the door. She opened it. Seby, breathless, dishevelled, looking frightened literally pushed himself inside and begged her.
“Aunty, I am in trouble, police are after me, please help me.”
Just as she was trying to lecture him, they heard a jeep stopping in front of their house. Quickly she pushed him on one of the rooms and locked lit. There was a knock at the door. She opened it. There were two policemen, they seemed very embarrassed.
“Madame, we have bad news for you. Your son David has been killed accidentally. We were informed that Seby was given a new consignment of drugs to be delivered to Calangute. We wanted to stop it. He was with some boys. He tried to run away and we fired. Unfortunately, he escaped and David was killed.” Joanna was looking at them as if she was drained of all emotions.
“We are sorry for the accident. We’ll bring his body here as soon as the formalities are over. Do you want us to call a neighbour to keep your company?”
Joanna slowly replied: “No, please, you can go.”
They were about to leave, they came back and said. “Madame, have you seen Seby today? We could help you to avenge your son’s death.”
Just for a few seconds, she hesitated and then firmly uttered:
“No, I haven’t.”
As soon as the sound of wheels died out, she got up and quietly opened Seby’s room. He was shattered, he had heard everything. The only person who loved and cared for him was dead. He was responsible for it. If only he had listened to David’s advice. His mother was suffering so much and yet she was so good.
“I have killed him. I am sorry, please forgive me.”
Suddenly he knelt down, took her hands and said,
“Aunty, I promise to change my life from today. I’ll try to become the man David always wanted me to be.”
Joanna’s eyes filled with tears and two drops fell on Seby’s face. Placing her hand on his head, she softly said:
“Be strong, my son. May God help you.”
He got up and disappeared in the darkness of the night. Outside the world was celebrating the birth anniversary of the son of God who had come to this world to save humankind.
In the immensity of her loneliness and misery, she felt a strange peace.
She had lost her only son, but gained one life. She had done her share to complete the work Lord Jesus had come to do in this world.