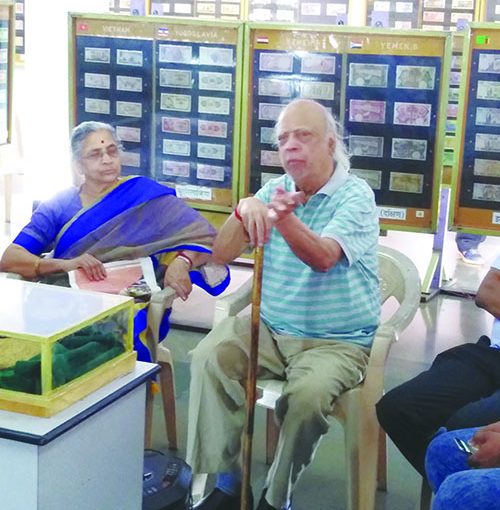 Vasant Datar of Pune has just donated his life-time’s collection of currency from the world over to the Lokmanya Multipurpose Co-op Society Ltd….

COLLECTIONS can be quite a passion, my dears. And last Sunday while attending a traffic seminar at the Kala Academy, I got attracted by the exciting exhibition of currencies and coins from around the world and ages ongoing at the Art Gallery! This unusual exhibition was put up by the Lokmanya Multipurpose Co-operative Society’s chairperson Kiran Thakur. This is the personal collection of Pune-based numismatist Vasant Datar. The two-day exhibition was in its last day and I couldn’t miss this one.
I mean an exhibition of currency would tantalize more than say an exhibition of stamps or something more mundane. The money was up on the walls in neat frames and absolutely tamper proof. It takes a while to take in the fascinating collection of coins and currency notes and some of the history — including some shining pure gold currency. This was a hefty gold coin on special exhibit and the cynosure of every curious eye. Reportedly the big fat outsize coin was made during Mughal times and the Emperor Jehangir used to gift such a heavyweight 10 kg embossed gold coin to special visitors like ambassadors from other countries. Return gifts, I suppose!
It was a scene to take in for this was the final day of the two-day exhibition and a small tea party of sorts was on with media folk, family and friends plying the 80-years-old plus numismatist Vasant Datar with all kinds of questions. As he sat with his wife Hemlata amidst his unique currency collection for visitors to absorb and be piqued by what has undoubtedly been a passion for him. A passion of 50 years, one understands and he is possibly one of Pune’s most travelled architects.
I mean, I know most of us are carried away by some collection passion at some point of life or another. True or false? We collect anything worthwhile or perceived not worthwhile! Think of all the women who collect hundreds and thousands of garments (be it sarees), footwear, gold and diamond jewellery, homes around the world. Some do collections for reasons of inane security, while others are driven by curiosity and a desire to leave behind a history of sorts for education’s sake if nothing else.

Amongst the last group I would put Vasant Datar with his personal collection of currency which he has pursued with rare ardency — and now he has donated it all to Kiran Thakur of the Lokmanya Multi-purpose Co-operative Society Ltd (which has grown from strength to strength, and he is also a media baron, owner of Goa’s best-selling Marathi daily Tarun Bharat) with whom he shares a long standing friendship and banking relationship.
Lokmanya is now responsible for safeguarding the collection and putting it on exhibition as a travelling exhibition and later a numismatic museum in on the cards. Vasant bab likes the idea of a currency museum in Goa for his collection, because “All kinds of tourists come to Goa, so this is the right place for something like a museum….then more people will see and be educated about history!”
It was a real pleasure to say hello to the numismatist himself and his wife Hemlata who in response to a query disclosed she’s been the real caretaker of her husband’s collection…he travelled and collected and she took care of it. Oftentimes she was alone while raising their son and as more currency came in courtesy her husband’s adventures — someone had to do the honours of preserving the notes. The lamination and framing came later to protect the notes from the vagaries of climate, silver worm or termite attacks and so on. The collection of currency and coins is from 235 countries — almost every country is represented. Some exhibits are very exclusive piece de resistance ones.
Added Datar-saheb, “The big fat 10 kg gold coin from Shah Jahan’s time is called nazrana coin and given on special occasions liked marriages…my smallest coin is a one-paise coin the size of a grain!” His life’s adventures have taken him to visit his maternal grandfather (Babasaheb Gokhale) via Khyber region and he was the last traveler to have travelled this route. Don’t miss the rare section of gold notes of 23 carat — these were issued by Antigua and Barbudu to celebrate independence from Britain! From the sound of it there are few countries the feisty, peppery Vasant Datar’s has not visited.

He is relieved that his numismatic collection is no long his responsibility but will be safeguarded by Lokmanya. Why did he not offer it to the government of India to safeguard in a public museum? He grimaced, “What government are you talking about, is there a government?” Well, he has a point, I chuckled as I returned to office with more on my mind than traffic posters to educate the public about minding their manners while riding the roads!
ON that note it’s avjo, poiteverem, selamat datang, au revoir, arrivedecci and vachun yetta here for now, think about all this and don’t just stay with thinking.