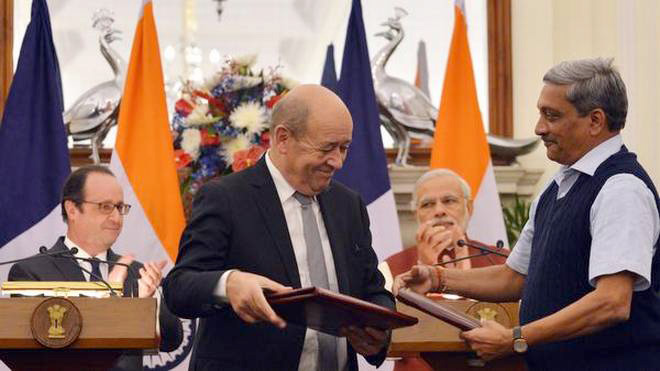 At the height of the negotiations over the controversial `7.87 billion Rafale deal between India and France, the Defence Ministry raised strong objections to “parallel negotiations” conducted by the Prime Minister’s Office (PMO) with the French side. Stating that it was clear that such parallel discussions by the PMO had “weakened the negotiating position of MoD and Indian Negotiating Team,” a Defence Ministry note dated November 24, 2015 brought this to the attention of the then Defence Minister, Manohar Parrikar.
Stating that “we may advise PMO that any Officers who are not part of Indian Negotiating Team may refrain from having parallel parlays [parleys] with the officers of French Government,” it suggested that “in case the PMO is not confident about the outcome of negotiations being carried out by the MoD, a revised modality of negotiations to be led by PMO at appropriate level may be adopted in the case.”
According to the government’s submission to the Supreme Court of India in October 2018, the negotiations over the Rafale deal were conducted by a seven-member team headed by the Deputy Chief of Air Staff. There was no mention of any role for the PMO in these negotiations.
Official documents available to The Hindu reveal, however, that the Defence Ministry protested that the position taken by the PMO was “contradictory to the stand taken by MoD and the negotiating team.” The then Defence Secretary, G Mohan Kumar, made this official notation in his own hand: “RM may pl. see. It is desirable that such discussions be avoided by the PMO as it undermines our negotiating position seriously.”

His firm opposition was recorded on November 24, 2015 on a note prepared by S. K. Sharma, Deputy Secretary (Air-II), and endorsed by the Joint Secretary & Acquisition Manager (Air) and the Director General (Acquisition) in the Ministry.
The new Rafale deal, which bore little resemblance to the original deal under prolonged negotiation, was announced in Paris by Prime Minister Narendra Modi in April 2015. This was followed by the signing of a Memorandum of Understanding between India and France when President Francois Hollande visited Delhi on the occasion of Republic Day in 2016. The inter-governmental agreement for 36 Rafale fighter jets was eventually signed on September 23, 2016.

According to the Defence Ministry note, the details of the parallel negotiations conducted by the PMO came to the Ministry’s notice only from a letter of October 23, 2015 from General Stephen Reb, the head of the French Negotiating Team. The letter “made mention of a telephonic conversation between Shri Jawed Ashraf, Joint Secretary in the Prime Minister’s Office and Mr. Luis Vassy, Diplomatic Adviser to the French Minister of Defence, which took place on 20.10.2015.”
General Reb’s letter was brought to the notice of the PMO by the Defence Ministry. The head of the Indian Negotiating Team, Air Marshal S. B. P. Sinha, AVSM VM, Deputy Chief of Air Staff, also wrote to Mr. Ashraf.
In his reply to Air Marshal Sinha on November 11, 2015, Mr. Ashraf “confirmed that he had held discussion with Mr Luis Vassy, Diplomatic Adviser to the French Minister of Defence,” adding that Mr. Vassy “spoke to him on the advice of the French President’s office and the issues referred to General Reb’s letter were discussed.”
President Hollande had told AFP, as reported by Le Monde in September 2018, that “asked by Agence France-Presse on the sidelines of a conference in Montreal on Friday, he said that the name of Reliance Group had appeared as part of a ‘new formula’ in negotiations over the Rafale deal, decided by the Modi government after it came to power.” The reference was to the Anil Ambani-owned Reliance Defence.
The Defence Ministry note also stated that “the discussions between Diplomatic Adviser to the French Defence Minister and Joint Secretary to PM tantamount to parallel negotiations while the Indian Negotiating Team constituted by the Ministry of Defence is undertaking the process of formal negotiations with the French side.”

“Such parallel negotiations may be detrimental to our interests as the French side may take advantage of same by interpreting such discussions to their benefit and weakening the position taken by Indian Negotiating Team. This has precisely happened in this case,” the note added.
Citing “a glaring example”, the Defence Ministry note pointed out that General Reb in his letter had stated that “taking into consideration the outcome of discussions between Diplomatic Adviser to the French Defence Minister and Joint Secretary to PM, no Bank Guarantee is provisioned in the supply protocol and the letter of comfort provides sufficient assurances of the proper implementation of the supply protocol by the industrial suppliers.”
This, the note stated, was “contrary to the position taken by the MoD and conveyed by Indian Negotiating Team that the commercial offer should be preferably backed by Sovereign/Government Guarantee or otherwise by Bank Guarantee.” Another instance of a contrary stand taken in the parallel negotiations was on the arbitration arrangement, the note pointed out.
This is not the only instance of “parallel negotiations” in which the Indian side took contrary positions. It has already been reported elsewhere that the National Security Adviser, Ajit Doval, negotiated with the French side in Paris in January 2016 and The Hindu has access to documentation that confirms this. Mr Doval’s advice to Mr Parrikar on doing away with a sovereign guarantee or bank guarantee for the Rafale deal was also recorded by the then Defence Minister in a file noting.

France’s ex-President Hollande says, contrary to claims, it was the Indian government that picked Reliance as offset partner
Former French President Francois Hollande has claimed that the Indian government suggested industrialist Anil Ambani’s company as the offset partner for the 7.87 billion deal to purchase 36 Rafale fighter jets. Hollande was the French President at the time the deal was agreed to in 2015. He told a French news outlet, Mediapart.fr, that his government didn’t have “a choice” in the selection of Reliance Defence, the company owned by Mr Ambani. “It is the Indian government which has proposed this service group and it is Dassault that has negotiated with Ambani. We didn’t have a choice, we took the interlocutor that was given to us,” he was quoted as saying. Repeated assertions His comments fly in the face of repeated assertions made at the highest level of the Indian government that it was Dassault Aviation (DA) that selected Reliance Defence as its offset partner. Defence Minister Nirmala Sitharaman had said “no offset contract has been signed so far” and an agreement between two companies did not require the permission of the government. “As per the applicable guidelines, DA is free to select the Indian offset Partners and provide their details at the time of seeking offset credits, or one-year prior to the discharge of offset obligation,” the government had stated. Responding to Hollande’s comments, the Defence Ministry tweeted that the statement was being “verified.” “It is reiterated that neither [the] Government of India nor [the] French Government had any say in the commercial decision,” the Ministry said in a tweet. In September 2016, India and France signed a7.87 bn agreement for 36 Rafale jets in fly-away condition. The deal includes aircraft, spares, weapons, maintenance and performance guarantee for five years. The deal has a 50% offset clause to be executed by DA and its partners. Under this, DA and Reliance Defence have set up a joint venture to manufacture aerospace components.
In a recent interview Ms Sitharaman denied any government role in the choice of offset partner in the Rafale deal. She had said, “Isn’t that a decision of a commercial enterprise to take on its own? I have nothing to do with it. I have not prompted them, not led them, not told them, not instructed them. I have not done any match-making whatsoever.”
The Reliance Group had stated that it got the offset contract from DA and did not receive any contract from the Defence Ministry till date.