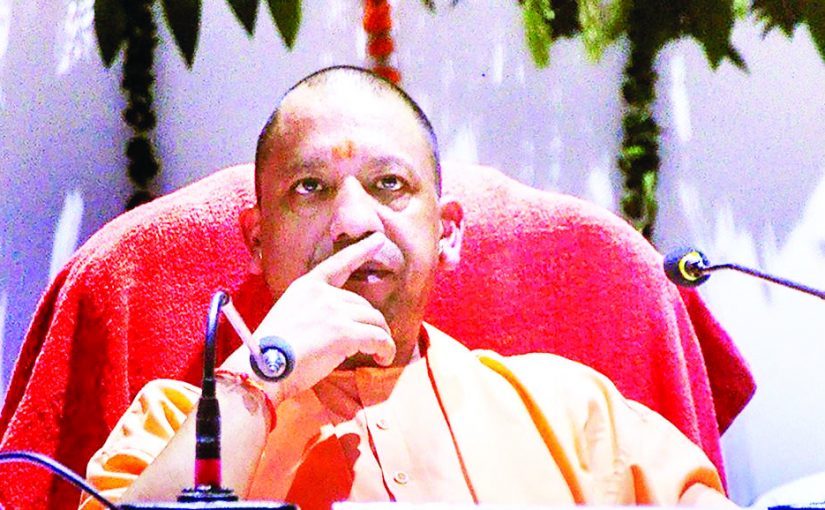 RAPPED: The Election Commission has silenced Yogi Adityanath for 72 hours for hate speeches against the minority Muslim community

The SC has asked the Election Commission why it has failed to act on hate speeches. The EC in turn has pleaded that it does not have powers to act. However, after facing the wrath of the SC it quickly asked several senior leaders like Mayawati and Yogi Adityanath to remain silent from one day to three days respectively

The Supreme Courton Monday, April 15, gave the Election Commission of India (ECI) exactly 24 hours to explain its lawyer’s submissions in court that the poll body is largely “powerless” and “toothless” to act against religious and hate speeches by candidates during the 2019 Lok Sabha election campaigning.
During the hearing, Chief Justice of India Ranjan Gogoi even threatened to have the Chief Election Commissioner (CEC) in the courtroom within the next half hour if the court did not get clear answers to its questions on the poll body’s powers under the law against candidates who spew vitriol, reported The Hindu.
The court found that the ECI had issued notices for hate speeches and campaigning for votes on the basis of religion in only three cases so far in the 2019 Lok Sabha elections.
The three include Uttar Pradesh Chief Minister Yogi Adityanath and Bahujan Samaj Party (BSP) supremo Mayawati.
The ECI, represented by advocate Amit Sharma, said Mr Adityanath had been issued an advisory. Ms Mayawati, the ECI said, had asked for votes in the name of religion.
“So what about Mayawati? She was supposed to reply to you [the ECI] by April 12… Today is April 15. She has not replied. What does the law permit you to do in such cases? Answer us… What will you do now? What are you empowered to do?” Chief Justice Gogoi was quoted by The Hindu as saying.
“We will issue an advisory… We may file a complaint,” Mr Sharma replied.
Mr Sharma tried to reason, saying, “There is a procedure… We have to give them time to reply.”
“So you are basically saying you [the ECI] are toothless and powerless against hate speeches. The most you can do is send a notice to the offending candidate. If the candidate replies, send him or her an advisory. Despite this, if there is violation of Model Code of Conduct, you may then file a criminal complaint… That is all? Those are your powers under the law?” Chief Justice Gogoi asked Mr Sharma.
Mr Sharma concurred that was “no other power” with the ECI. “We [the ECI] cannot de-recognise or disqualify the person. This is the only power,” he submitted.
Hearing this, the court decided to examine in detail the issue of the ECI’s powers to deal with hate and defamatory election speeches, and violations of the Model Code of Conduct. It ordered an ECI official to be personally present in the court on April 16.
Mr Sharma tried to explain that the ECI had “standing instructions” to act against hate speeches and the violation of the Model Code.
“What do you mean by ‘standing instructions’? You are duty-bound… In certain matters like this, time is limited. You have to act promptly. Whether the outcome is good or bad, you have to get into it immediately,” Chief Justice Gogoi addressed the counsel.

The court was hearing a petition filed by a Non Resident Indian (NRI) Harpreet Mansukhani, highlighting the increase in hate and divisive speeches in the name of religion in the Lok Sabha elections of 2019.
The petition had called for strict action against political leaders and party representatives spreading hatred on religious and caste lines through the media, especially social media platforms.
The petition had urged the court to direct the constitution of a committee headed by a former apex court judge to closely watch the election process and check the fairness of the ECI.
The petition said the communalism of Indian politics, and caste-based parties, were a “great threat to the spirit of the Constitution”.
Ms Mansukhani, represented by senior advocate Sanjay Hegde and advocate Arup Banerjee, said, “India is beginning to look like Turkey under Erdogan or Russia under Putin, which are turning towards a populist majoritarian leader and right-wing politics for their salvation.”
“The essential component of a constitutional democracy is its ability to give and secure for its citizenry a representative form of government, elected freely and fairly, and comprising of a polity whose members are men and women of high integrity and morality,” the petition said.

The Supreme Court on Tuesday took note of the Election Commission of India (ECI) quickly changing tack on April 15 to pass a flurry of restraining orders against leading political candidates for their communally provocative and divisive speeches.
“Seems you have got your powers now,” Chief Justice of India Ranjan Gogoi said, addressing the ECI on Tuesday.
The CJI was referring to ECI action taken against Uttar Pradesh Chief Minister Yogi Adityanath, Bahujan Samaj Party supremo Mayawati, Samajwadi Party leader Azam Khan and BJP leader Maneka Gandhi.
All four leaders were variously restrained from election campaigning for 48 to 72 hours.
“We found we have several powers…” senior advocate CA Sundaram, who represented the ECI, acknowledged in court.
“So, ECI has woken up to its powers,” Chief Justice Gogoi said pointedly, again.
“Pursuant to order passed yesterday (April 15), ECI has taken action, appropriate details of which have been submitted. No further order called for today. Mention (the case) as and when required,” the Supreme Court recorded in its order on Tuesday.
However, Mayawati’s lawyer and senior advocate Dushyant Dave cried foul against the ECI action. Mr Dave said the ECI’s order against her was “extremely drastic”. He sought an urgent hearing at 2 p.m. on Tuesday.
“This is harsh… Meetings are already scheduled,” Mr Dave urged the court for a hearing.
“File an appeal if you want… Not commenting on anything now,” Chief Justice declined.