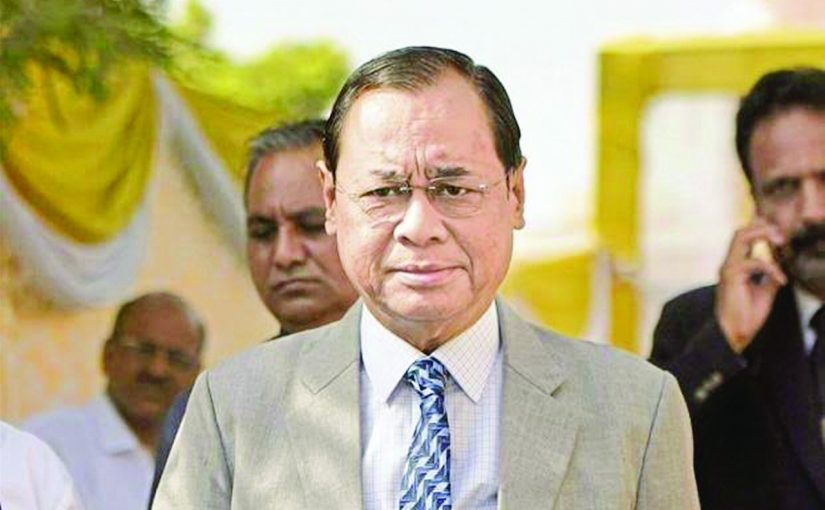 INDEPENDENT: CJI Gogoi has a reputation for being an independent judge who will not be dictated to by the political establishment. His loyalty is primarily to the Constitution of India

The molestation charge against Gogoi is unique in that this is the first time charges of molestation have been made against any Chief Justice. The circumstances under which the CJ held a special sitting of the Supreme Court are explained

A day after he was accused of sexual harassment and abuse of power by a former Supreme Court staffer, Chief Justice of India Ranjan Gogoi presided over a special hearing on Saturday in which he claimed the independence of judiciary was under threat. The allegations against the Chief Justice of India were listed out in affidavits sent to 22 judges of the Supreme Court by the former staffer, who demanded an inquiry into Gogoi’s behaviour.

Here’s a quick run down of what happened:

What are the allegations?
In an exhaustive report, Scroll.in’s Supriya Sharma and Sruthisagar Yamunan examined the allegations of the former Supreme Court staffer, starting from when she began working for Gogoi to the alleged victimisation of her and her family after the incident in question.
In short, the allegations listed out in the affidavits sent to the other Supreme Court judges aside from Gogoi on Friday were that:
On October 11, 2018, Chief Justice Gogoi “hugged me around the waist, and touched me all over my body with his arms and by pressing his body against mine, and did not let go… He told me ‘hold me’, he did not let go of me despite the fact that I froze and tried to get out of his embrace by stiffening and moving my body away,” the woman alleged in her affidavit.
The woman says she rebuffed Gogoi at the time. According to her affidavit and the covering letter, what followed was a series of developments that saw her transferred out of Gogoi’s office and dismissed from service soon after. Later, her husband and two brothers-in-law also lost their government jobs.

Though she says she apologised and even prostrated and rubbed her nose at the feet of Gogoi’s wife, the woman alleges that the victimisation continued afterwards, with a case being filed against her in March 2019 referring to accusations of cheating that date back to 2017.

What was the response?
Chief Justice Gogoi has not directly responded to questions put to him by Scroll.in or other news organisations about the matter.
On Saturday morning, the Supreme Court Secretary General sent a statement to Scroll.in calling the allegations “completely and absolutely false and scurrilous.” The statement claimed that the allegations were being made as “pressure tactics” for the woman to come out of various proceedings initiated against her and her family. It also said, it is “very possible that there are mischievous forces behind all this, with an intention to malign the institution”.
The same morning, Chief Justice Gogoi called a sudden special bench hearing featuring Justice Sanjeev Khanna and Justice Arun Mishra on a “matter of great public importance touching upon the independence of the judiciary” after it had been mentioned to him by Solicitor General Tushar Mehta.

During the hearing, Gogoi said that “things had gone too far” and said that he “should not stoop low even in denying it”. The Chief Justice insisted that reputation is all judges have, mentioning that he only has `6.8 lakh in his bank balance. Gogoi also sought to question the woman’s story, raising questions about the cases against her. After a 30-minute hearing, however, he then said he would not pass any judicial order and was leaving it to Justice Mishra to do so.
In the order that followed, the court called on the media to act responsibly and decide whether to publish “wild and scandalous” allegations. The order only included the names of Justice Mishra and Justice Khanna, with no mention of Chief Justice Gogoi.

Why now and what about allegations against her?
In the hearing, references were made to criminal cases against the woman and her family. The Secretary General of the Supreme Court also alleged that the harassment accusation was an attempt to “get out” of these cases.

What are these cases?
After the incident, the woman’s husband and her brother-in-law, both of whom were head constables in the Delhi Police, were suspended from service in December 2018 for a criminal case involving a colony dispute dating back to 2012 that had been mutually resolved.
On March 3, 2019 — a few months after the alleged incident — Delhi Police registered a First Information Report against the woman, after a man named Naveen Kumar said he had given her an advance of 50,000 back in 2017, upon being promised a Supreme Court job for a price of10 lakh. The case was filed under sections of the IPC related to cheating.
The woman insists that the allegations are “false, malicious and premeditated to harass and terrorise me and my family.” She claims that the police detained her and tortured her in connection with this case. She produced some video evidence to corroborate these claims also. Moreover, though the woman was initially given bail, the police had asked for this to be cancelled, alleging that she and her associates had threatened the complainant.

Speaking to the Huffington Post, the woman explained that this is also why she had gone public about the incident, with the report saying that she fears, “if her bail is cancelled… she might disappear into the depths of India’s legal system where it is not uncommon for undertrials to spend years in prison while their cases are heard”.
The case was to come up on Saturday, April 20, but was on that day adjourned to April 24 when it will be taken up in Delhi’s Patiala House Court complex.

What else should I know?
Several news reports also drew attention to the difficult question of what happens hereon. The Indian Express pointed out that the spotlight “has shifted to the 26 judges, excluding the CJI, who were all sent a copy of the affidavit and the complaint by the aggrieved woman employee on Friday… Their response, as members of the Supreme Court, is bound to define the path which will guide the institution in dealing with the crisis.”
The piece also points out that though the Supreme Court has an internal committee to deal with allegations of harassment, and is empowered to pass various orders, it does require the permission of the Chief Justice himself to do so.
The Hindu brings up the same gap within the law, saying, “in the in-house procedure for dealing with complaints against Supreme Court and High Court judges, it is the CJI who “examines” whether a particular complaint is frivolous. There is no word in it on how to deal with a complaint against the CJI.”

What is being said about it?
The Bar Council of India chairperson condemned the allegations, saying they are “false and cooked-up”.
The Women in Criminal Law Association called for an inquiry. “It is our opinion that, due to the immense disparity in power and position, the Hon’ble Chief Justice of India cannot continue to hold office during the inquiry,” it said.
Senior Advocate Dushyant Dave wrote a piece in the Hindu saying that the hearing held on Saturday by the Chief Justice should not have happened under any circumstances. “My Lords, you have acted against every known judicial norm and practice,” he wrote. “You have acted against your law which you have brilliantly and rightly declared over decades. Please remember, the law so declared binds Your Lordships too.”
Gautam Bhatia in the Mumbai Mirror said the proceedings were “a spectacle fit for a kangaroo court”: “During the course of this highly irregular ‘hearing’ — where the complainant was not even represented — the case was prejudged, a conspiracy was proclaimed, and the independence of the judiciary was invoked as a shield against accountability. In the space of a few minutes, every principle of natural justice — starting with ‘no person shall be a judge in their own cause’ — was flagrantly violated.”
Namit Saxena on LiveLaw raised a number of questions about the Supreme Court’s conduct, including the fact that the woman in question was not called to the proceedings but vilified and that neither the Solicitor General, Attorney General or Supreme Court Bar Association drew attention to the “existing mechanism in which allegations of sexual harassment are to be dealt with”.
Murali Krishnan on Bar and Bench called the order passed by the court “bizarre” and “vague” particularly since it makes “suggestions” to the media.
Gyanant Singh in the Quint says that “given the fact that the complainant in this case is by an employee of the court against the CJI himself, a high-powered independent committee which should also include retired judges could be considered”.
Finance Minister Arun Jaitley wrote in on his blog that it is time to stand with the judiciary in the face of the allegations against Gogoi. He raised questions about the complainant’s motivation and also added, “when four digital media organisations with an unparalleled track record of ‘institutional disruption’ send similar questionnaires to the Chief Justice of India, there is obviously something more than what meets the eye”.

The Bar Council of India has condemned the allegations of sexual harassment levelled against the Chief Justice of India Ranjan Gogoi by a former Supreme Court staffer.
The BCI issued a statement condemning the allegations as an “attempt to malign the image of our Chief Justice of India and the Highest Judicial Institution” and has stated that the allegations are false and concocted. Claiming that the allegations are a part of a conspiracy, the statement reads,
“The cock n bull story has been cooked up to plot some big conspiracy against the institution. Bar is fully standing with our C.J.I. and the Judges of Supreme Court.”
Earlier today, four publications published a report containing allegations made by a former Supreme Court staffer against CJI Gogoi pertaining to alleged sexual harassment. The Supreme Court held anurgent hearing on Saturday at 10.30 in the morning to address these allegations and stated that the allegations were an attempt to browbeat the country’s highest Court.
While the special Bench sitting for the hearing comprised CJI Ranjan Gogoi himself along with Justices Arun Mishra and Sanjiv Khanna, the order passed by the Bench does not reflect the name of CJI Gogoi.
In the wake of the allegations, the Bar Council has appealed to the entire legal fraternity “to stand with the institution and save it”. The Chairman of the BCI, Manan Kumar Mishra has stated that an emergency meeting of the Council has been called for Sunday in order to address this issue and decide the course of action. The Council’s delegation will also meet with CJI Gogoi as well as other Supreme Court Judges to apprise them of the BCI’s stand on this issue.