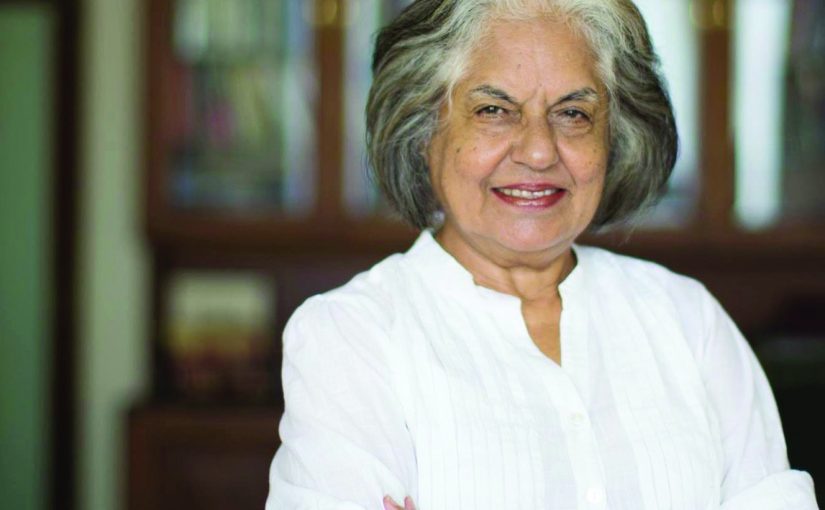 ACTIVIST: Indira Jaising is a feminist and activist, and firmly believes that all citizens, including the Chief Justice, are equal under the law

Several well known women, including Indira Jaising, one of the senior-most women lawyers in India, who has also been an activist, have questioned how the Chief Justice can sit in judgment over charges against him. More than 250 women lawyers and academics wrote an open letter (full text in box) appealing to the SC for a fair probe on CJI sexual harassment case

Several well known women, including Indira Jaising, one of the senior-most women lawyers in India, who has also been an activist, have questioned how the Chief Justice can sit in judgment over charges against him. More than 250 women lawyers and academics wrote an open letter (full text in box) appealing to the SC for a fair probe on CJI sexual harassment case

Several women’s activists, women’s rights groups, lawyers and feminists from across India have come together to issue a statement demanding a fair and impartial inquiry — in accordance with the Sexual Harassment of Women at Workplace (Prevention, Prohibition, and Redressal) Act 2013 (“POSH Act”) — into the sexual harassment allegations against Chief Justice of India Ranjan Gogoi.
In their letter to the apex court, the signatories demand that a special inquiry committee comprising “credible individuals” be set up, the complainant be allowed legal assistance of her choice and that Gogoi refrain from transacting official duties till the inquiry is over. The inquiry should be completed within 90 days, the women say.
The complainent, a former apex court employee had in an affidavit dated April 19 revealed the apparent victimisation she, her husband and their family have undergone over the past few months. The victimisation, she claims, began after she spurned what she claimed were inappropriate advances of the CJI last October.
After the story came out, in an emergency hearing on Saturday, the chief justice himself presided over the matter. Refuting the allegations, Gogoi said that there was a “bigger plot” to deactivate the office of CJI.
Earlier, several activists, writers and academics including Arundhati Roy, Medha Patkar, Aruna Roy, Kamla Bhasin, Bezwada Wilson and Anjali Bhardwaj had also endorsed a statement demanding an independent probe into the matter.
The letter also underlines how the CJI’s and the apex court’s response to the allegations delegitimise women’s complaints of sexual harassment.

Senior advocate Indira Jaising on Saturday questioned why Attorney General KK Venugopal appeared in the Supreme Court during the hearing on the sexual harassment allegation against CJI Ranjan Gogoi.
Jaising, founder of The Leaflet that was among the four portals which reported the allegation against the CJI prompting the extraordinary hearing, suggested that Justice Gogoi should withdraw from hearing any matter related to the government.
In a series of tweets, Jaising, who was additional solicitor general during the UPA-II regime, asked since the “government has so vociferously defended the Chief Justice of India, should he not recuse from hearing any cases relating to the government?”
“What have the allegations of sexual harassment by a dismissed woman employee of the SC got to do with the Government of India ? Why should the Attorney General for India appear is such a case?” she tweeted.
She said, “It is not for us to say whether the allegations against the Chief Justice of India are true or false, a competent court will decide, but everyone is entitled to due process.”
The senior lawyer tagged the story carried by news portal The Leaflet with her tweets. The news portal has been founded by Jaising and senior advocate Anand Grover under the aegis of their NGO “An Imprint of Lawyers Collective”, according to its website.
During the extraordinary hearing Saturday in the Supreme Court, Chief Justice of India Ranjan Gogoi said there was a “common thread” in the communications sent to him by four news portals that carried stories on allegation of sexual harassment against him, and suggested a “bigger force” could be behind the controversy to “deactivate” the office of the CJI.
The CJI, who was part of a hurriedly convened special bench also comprising justices Arun Mishra and Sanjiv Khanna, said the four news portals — Scroll, The Leaflet, Caravan and The Wire — have carried the stories on the allegations.
“There is a common thread in the communications, and the questions I was asked to answer are common,” he said, adding, “They (news portals) gave less than five hours notice to the CJI to respond”.

To
The Judges of the Supreme Court of India, New Delhi,
CJI Sexual Harassment case: Seeking a fair and impartial enquiry in accordance with the Sexual Harassment of Women at Workplace (Prevention, Prohibition, and Redressal) Act 2013.
We, lawyers, scholars and members of women’s groups and civil society are shocked at reading the contents of the complaint of sexual harassment and criminal intimidation suffered by a former employee of the Supreme Court of India. An affidavit was submitted by the aggrieved woman to the 22 judges of the Hon’ble Supreme Court detailing the sexual harassment faced by her from none less than the Chief Justice of India. The 29 pages-long affidavit explained how she was posted in the office of the Chief Justice, systematically pursued at her home and office through calls and messages, encouraged initially with compliments, favours and excessive attention, finally followed by sexual advances. The administrative persecution both by way of termination of employment, and registration of criminal cases against her and her family members came upon her when she rejected the sexual advances made by the Chief Justice.
While the allegations listed in the affidavit are shocking, equally worrisome was the responseof the Chief Justice: apart from denying the charges, he constituted a Special Bench along with two other Judges at 10.30 am to hear a matter of “great public importance touching upon the independence of judiciary”.
In short, he constituted a Bench to hear his own case!
Justice Arun Mishra and Justice Sanjiv Khanna, who were part of the specially constituted Bench, noted that they will not pass an Order, but nevertheless did so. Referring to theallegations as “wild and scandalous”, they went on to say that such allegations negate the independence of the Judiciary. They also counselled the media to observe restraint. Strangely, the Order did not name the presence of the Chief Justice at whose instance the Special Bench was convened. Further, there was nothing in the Order which indicated that the Judges passed this Order based upon any investigation by a competent authority.
We are both shocked and saddened that the Chief Justice of India as well as the Special Bench have responded as most men, in public office or in positions of authority and powerdo, when accused of sexual misconduct. Denial of the allegations, maligning the complainant, citing past histories, imputing ulterior motives to the complainant are familiar and regular devices deployed by accused men. Equally common is the undertaking of vindictive measures including administrative harassment and suits of defamation against complainants.
Not only have the Chief Justice and the Supreme Court of India not set an example by their behaviour, but they appear to have moved a step ahead to delegitimise women’s complaints of sexual harassment – they have declared that the allegation is itself an attempt to tarnish the independence of the Judiciary. This is both indefensible and appalling. We fail to see what this has to do with the independence of the Judiciary, which we wish to uphold as conscientious citizens, but this ought not to be interpreted to mean immunity from investigation when allegations are made.
The Bar Council of India has rubbished the complaint as an attempt to malign the Judiciary and termed it politically motivated. In the absence of a duly conducted investigation or enquiry, we are puzzled about how the BCI, lawyers and judges are concluding with such haste that the complaint is false, baseless and motivated.
On 24th April it has been reported that, Justice Bobde, the next senior most judge from Supreme court has been asked by the CJI to appoint a committee which will enquire into the allegations of sexual harassment against the CJI.
Justice Bobde has appointed a committee with himself as chair and Justice N V Ramana and Justice Indira Banerjee as members. The constitution of this committee with no external member is in complete violation of The Sexual Harassment of Women at Workplace(Prevention, Prohibition, and Redressal) Act 2013.
Media reports that this committee will start hearing on Friday 26th April 2019 and that it has no fixed time frame in which to finish the proceedings, will follow an in house procedure and will not allow legal representation to either parties. While the Mr Ranjan Gogoi may not need legal representation, this is tilting the balance against the complainant, again violating the spirit of the Vishakha judgement and The Sexual Harassment of Women at Workplace(Prevention, Prohibition, and Redressal) Act 2013.
In the given circumstances, keeping in mind the magnitude of the complaint we demand: