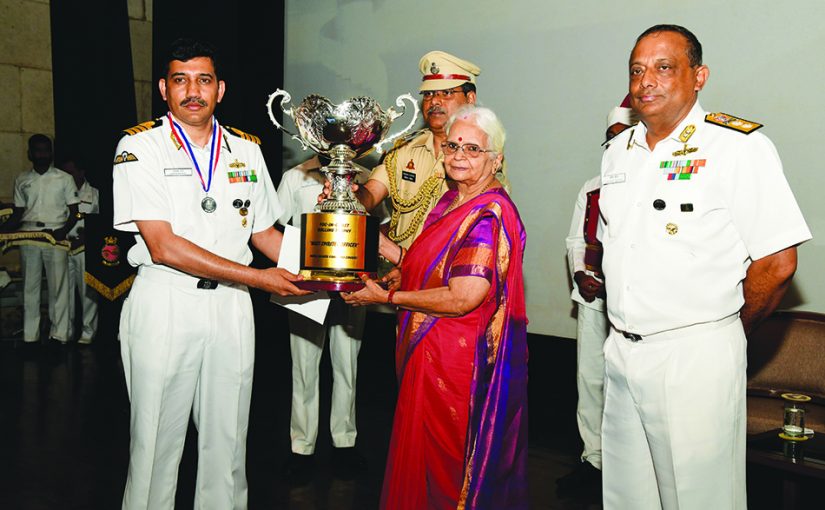 NAVAL FUNCTION: Governor Dr (Smt) Mridula Sinha presented certificates and awards at the valedictory function of the 31st Naval Higher Command Course (NHCC) at Naval War College at INS Mandovi, Vertem on May 09, 2019. Addressing the participants she asked them to be ‘scholar-warriors’. She added, “We all need to discharge our duties with courage of conviction and highest levels of personal integrity. Even a single act of indiscretion by an individual in these days of transparency and connectivity could generate adverse publicity for the service”. The Governor urged the participants to be absolutely fair in their dealings in all their assignments. “For all your actions will always be subject to greater scrutiny. The secret lies in remaining truthful to your service and most importantly to yourself,” the Governor added. Rear Admiral Sandeep Beecha, Commandant of the Naval War College is also seen

VOTE FOR A CLEAN MLA!

ON May 19, 2019, while electing the next MLA of Panaji select and vote for a candidate of outstanding integrity and who has no criminal antecedents whatsoever. We need to elect a well-educated candidate who will be a legislator whom we can all be proud of.
Let us not sin by voting for smart corrupt rags to riches candidates. Opt for a seasoned and mature statesman. Do not vote on the basis of caste, creed or pecuniary inducements.
Panaji deserves the best. Not someone who will take us for a ride any further. On May 19 vote for a candidate who is strong and has the best interests and common good of all its electorate. Vote for a candidate who is strong, intelligent, educated, humble, approachable…a real leader who understands and respects the needs of common man as much as industrialists, professionals, wealthy elite!
— Aires Rodrigues, Ribandar

WHAT A BJP MOVIE!
EVERYONE must have enjoyed the movie starring Caprio and Tom Hanks. It was based on the true life of con artist Frank Abagnale who at 17 years impersonated Pan Am pilots and doctors to scam people off millions. Would the book/movie had made it if were not for Frank Abagnale? If the authors ever visited little Goa and studied the politicians here, then yes!
What do con artists rely on? First they are very good listeners: They learn all that you want and make promises to give you what you want while actually doing the opposite. What do Goans want? Special status, no hill cutting, land conversions, jobs for Goans in Goa, agriculture instead of concrete jungles, casino-free Mandovi, no illegal constructions, no conversion of agricultural land for monster buildings, etc.
AAP manifesto says they will give Goa special status. But they are contesting only 33 seats and cannot form a government. They also refuse to do any seat sharing with the Congress.
In 2014 Narendra Modi promised special status for Goa. Nothing happened. Instead, there was talk of rivers to be joined, MPT berths, traffic islands, 450 mts of CRZ, widening of highways eating into local houses…everyone waiting with open mouths! Someone listened and made football the official sport of Goa. The village grounds were hijacked in the name of development. They were developed but can locals use them if they are hired out to AIFF age groups and never available to local players?
SAG has been fined `10 crore for failing to hold National Games, ironically it is the only football grounds which are ready! How much did SAG earn from leasing village grounds? Who will cover the fine? Secondly, con artistes pass themselves off as confident, successful people. They flaunt themselves as social activists, highly studied individuals, security professionals, etc. They rely solely on these visiting intellectuals who get fooled by this and in turn fool others. Just see how the smart cities campaign is fooling smart people.
Goans are paying outsiders to get away with selling off Panjim! When Parrikar became defense minister he convinced everyone he would get the army to vacate Panjim. He proceeded to offer land in Quepem to the defense forces for air display programs. He promosed Goans another dream of removing casinos from the river Mandovi. Well, we all know who is the Big Daddy of Goa BJP! It’s not local BJP for sure.
Being an IITian graduate Parrikar played his confidence cards saying Goans cannot compete with others, so it’s okay if Cipla, P&G, Vedanta, etc, employ Maharashtrians, Bengalis, Tamils or people from the home state of CEO/chairperson. Parrikar said he would raise the educational standard of Goa and proceeded to listen to Goa University vice-chancellor to remove the knowledge of local language. This was quite acceptable to the “MOU in local language” protagonists. GU ranking keeps on falling drastically every year. Who is bothered? Not the chancellor for sure.
Then there is coal dust pollution at extreme level and seen at naked eye level. No sophisticated equipment required. What does your social activist or IITian politician do? He listens and proceeds to come to your aid. With a study by an IIT B Institute: To convince Goans there is no coal pollution, it is only due to locals burning other fuels!
We have many right thinking citizens who painstakingly write various suggestions to improve life in Goa. We fail to understand to whom we are writing. We are writing to politicians who listen and convince you they are giving what you want! See how many jobs the BJP is promising almost on a daily basis. Is there a saying: If you have to be conned, you will be?
Catch me if you can-II: Based on the true life story of BJP!
— R Fernandes, Margao

NAMO SHOULD REFLECT ON HIMSELF, NOT FORMER PMS!
Instead of giving the accountability of his own 5 year government, PM Modi is currently seen scoring some spectacular self-goals during the ongoing election rallies by unnecessarily blaming/accusing India’s most charismatic/modern former prime ministers of India, the late Pandit Nehru and late Rajiv Gandhi with all kinds of wild allegations. His recent allegations against the late Shri Rajiv Gandhi is that he had used the INS Viraat to go on a holiday with his friends and in-laws treating the same as his “personal taxi”. This has been dismissed as untrue by former Navy chief Admiral (retd), L Ramdas as well as a former commanding officer of the aircraft carrier, Vice Admiral (retd) Vinod Pasricha.
Mr Modi was also heard recently accusing the Congress for appointing Shri Kamal Nath as the chief minister of Madhya Pradesh despite being allegedly involved in the 1984 Sikh riots. Why, didn’t the BJP deliberately reward the same Mr. Modi by appointing him as the prime minister of India for playing a dubious role as a RSS chief minister of Gujarat during the infamous 2002 Gujarat riots?
And last but not the least, if Mr. Modi is really interested in eliminating all forms of terror then why are he and his BJP party still supporting/promoting known controversial dangerous extremist elements like Yogi Adityanath, Sakshi Maharaj, Sadhvi Pragya Thakur etc. (despite their criminal background and a number of serious cases against them in different courts across India)?
I think Mr Modi should stop making up his own wild baseless allegations and dragging the names of our former prime ministers of India for political gains. Instead he should speak of what his government has really done (and will do in the near future) before begging/telling the people of this country to re-elect him for another five years in the name of our dead soldiers in the ongoing Lok Sabha elections.
— Jerry Fernandes, Saligao