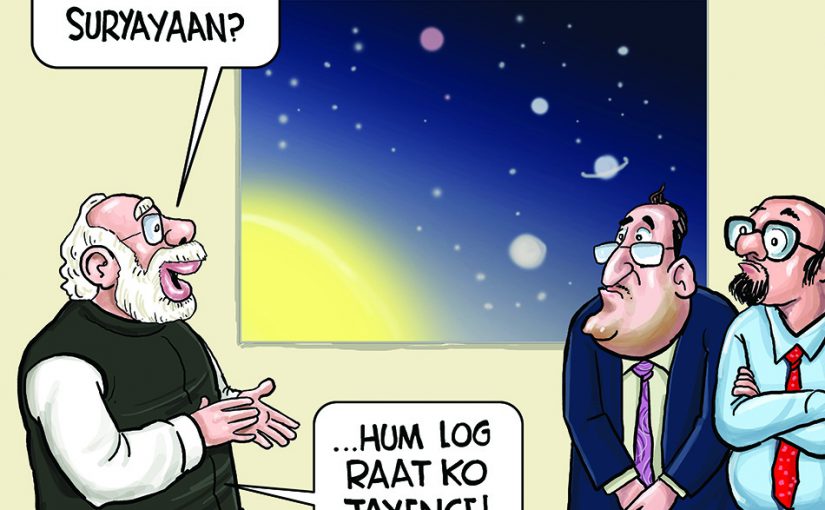 In an interview to News Nation, PM Modi claimed that he had told the airforce that it should not postpone the air strikes due to bad weather. He asserted that in his native wisdom he had told them that the thick clouds would help make the strike successful as it would hide the planes from Pakistani radar. Modi exposed his ignorance of how fighter aircraft work and could endanger the lives of our brave air force officers. His comments have not amused the international aviation community…

Prime Minister Narendra Modi said that he gave the Indian Air Force the green signal to proceed with its airstrike on a target in Pakistan’s Balakot area on February 26 despite bad weather because “the clouds could actually help our planes escape the radars”.
In an interview to News Nation on Saturday, Modi said that he used his “raw wisdom” to dispel the doubts of defence experts who planned mission. “I am surprised that the country’s pundits who abuse me never figured this out,” he said.
However, as many experts have noted on social media, Modi’s observation has no scientific basis. Radar technology uses radio waves to detect objects that may be obscured by fog so the clouds over region on Balakot would not have given Indian planes any advantage.
Though the Twitter accounts of the BJP’s India and Gujarat units shared the clip of the News Nation interview in which Modi makes these claims, these were deleted soon after.
The airstrike — which the Indian government described as a “non-military preemptive action” — was conducted 12 days after a terror attack in the Pulwama district of Jammu and Kashmir killed 40 personnel of the Central Reserve Police Force. The Jaish-e-Mohammed group, whose leaders are based in Pakistan, had claimed responsibility.
India claimed that the strike resulted in the deaths of “a very large number of JeM terrorists, trainers, senior commanders and groups of jihadis”.
Pakistan, however, said the India’s bombs only hit a few trees near it. International journalists and experts have also refuted India’s claims, although Modi and the Bharatiya Janata Party have doggedly used the Balakot air strikes in the campaign for the general elections.
On Saturday, Modi’s account of the advice he had given defence experts about the cross-border airstrike, which led to fears of war between India and Pakistan, was met with jibes and jokes on Twitter.
Kunal Kamra (@kunalkamra88) said, “He’s one step away from saying he was the pilot…
Aditya Menon (@AdityaMenon22) tweeted, “How’s the PM? High sir.”
Joy (@Joydas) tweeted, “Narendra Modi is the kind of absolute Idiot who will ask ISRO to send a Spacecraft to Sun during night because it will be Cooler.
Aisi Taisi Democracy (@AisiTaisiDemo) mockingly tweeted “ISRO wasn’t ready for the moon mission. The experts had their doubts. I told them to attempt it on the Full Moon Day because then they will have more area to land on. Vidya kasam.” – Our scientist PM
Someone was reminded of the 2001 Bollywood film, Lagaan, where a villager in pre-Independence India searches for clouds after months of drought.
Some users took a dig at both Modi’s claims and the escape of defaulting businessmen Nirav Modi, Vijay Mallya and Mehul Choksi from India during BJP rule. Supariman™ (@SupariMan_) said, “It was a cloudy and raining when Nirav Modi, Vijay Malya and Choksi escaped from India.”
Criticism came from Communist Party of India (Marxist) members, Sitaram Yechury and Mohammed Salim.
Sitaram Yechury (@SitaramYechury) said, “Modi’s words are truly shameful. Most importantly, because they insult our Air Force as being ignorant and unprofessional. The fact that he is talking about all this is itself anti-national; no patriot would do this” and later, “National security is not something to be trifled with. Such an irresponsible statement from Modi is highly damaging. Somebody like this can’t remain India’s PM.”
Md Salim (@salimdotcomrade) said, “Someone please tell him that radar is different from binoculars. Let’s wait till 23 May, Modi won’t be able to see BJP’s majority either with binoculars or with microscope. He would then need a radar to figure out where to escape from Delhi. #DeshKeDilMeiModi #Phase6 pic.twitter.com/7YMWE2q5Hj
Other users noted the irresponsibility of Modi’s comments.
Sankarshan Thakur (@SankarshanT) tweeted “Deleting does not erase this man’s deep and perilous illiteracy on critical matters of national security.
He is a clear and present danger to this whole geography. Wake up Indians”
Krishan Partap Singh (@RaisinaSeries) said, “Since Modiji has revealed that he overruled the advice of IAF top brass to reschedule the Balakot air strike bcs of cloud cover, questioning Balakot strike is no longer about the IAF but about Modi’s lack of judgment & inability of cabinet ministers & his aides to dissuade him.”
Salman Anees Soz (@SalmanSoz) tweeted “On PM Modi’s radar & clouds comment, it seems no one clarified for the PM how radars work. If that is the case, then it is a very serious national security issue. No laughing matter!”
Ajai Shukla (@ajaishukla) said, “Air Chief Marshal Modi claims his IAF planners were putting off the Balakot air strikes becoz of bad weather, but his @narendramodi’s operational genius perceived that cloud cover would help the aircraft exfiltrate. India should hang its head in shame for electing this charlatan.”

Speaking to News Nation, PM Modi said, “The weather suddenly turned bad, there were clouds… heavy rain. There was a doubt about whether we can go in the clouds. During a review (of the Balakot plan), by and large, the opinion of experts was – what if we change the date. I had two issues in mind. One was secrecy… second, I said I am not someone who knows the science. I said there is so much cloud and rain. There is a benefit. I have a raw vision, the clouds can benefit us too. We can escape the radar. Everyone was confused. Ultimately I said there are clouds… let’s proceed.”

The interview was televised on Saturday ahead of the crucial Phase 6 of the Lok Sabha elections.
BJP’s official Twitter account had initially posted PM Modi’s comment but it later took it down.