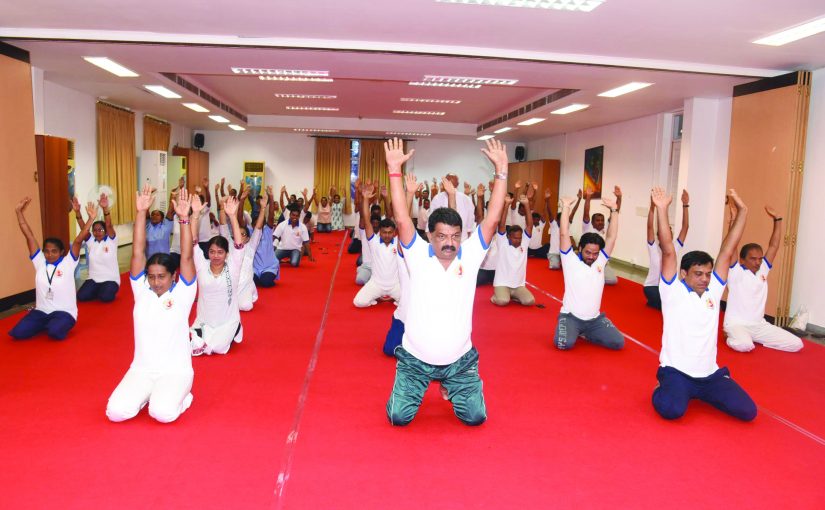 IT WAS THE 5th INTERNATIONAL YOGA DAY ON JUNE 21: Mercifully it wasn’t a rainy morning and almost everyone who counted in and out of government and schoolchildren were doing their best at various yoga demonstrations organised across Goa. Here we have Speaker of Goa Legislative Assembly Rajesh Patnekar
bending it…like David Beckham maybe! Clearly sarkar must set an example to praja. Also seen in pic along with other Goa Legislative Secretariat colleagues is Goa Secretary Namarata Ulman. Interestingly, our politicians are learning their yogasana courtesy Ambika Yog Kutir teachers visiting the secretariat regularly

News reports of 18/6 alone show us the way we work and it is far from flattering. At St Inez crematorium trees are felled for no valid reason while the CM advises his MLAs to grow more trees. At Navelim villagers are suffering from erratic/irregular power on one hand, while on the other a new power line is laid for a mega housing project. What about water? During the recent elections people complained about inadequate water supply and power.
Power Minister says the infrastructure is to blame. So how has the mega housing project been sanctioned if there is inadequate water supply and power? Existing inhabitants will have to make the sacrifices and forgo their quota of water and power to accommodate new inhabitants.
New complexes install their own transformers with a direct line to the same. The new line has only the mega complex to feed, all with new lines, while the village transformer has many ancient cables to the houses where capacity is overloaded. In such situations any new infrastructure would ensure the mega complex will have less power outage and no under-voltage than the homes of villagers!
Pernem locals continue to face a water crisis with a 30 MLD treatment plant hanging fire for more than a decade. The CM while reviewing projects under the Centre’s Sagarmala program stated that this would boost hinterland tourism. In the same daily’s reports locals thrashed drunken tourists for driving rashly close to a lady two-wheeler rider, causing her to fall. Ask anyone and they will tell you some tourists deliberately drive close to lady two-wheelers riders. Locals at hinterland picnic spots have protested that visiting tourists litter the place and cause nuisance with public drinking and picking fights with locals when they protest.
Is the CM not aware of all this?
Chicalim villagers ask for action against illegal constructions in their village. Must they do the job of the government? At Sanguem a 50-year-old footbridge collapsed. This is the lone link for some and their daily business now suffers. The government restarted the plastic free project recently. The Margao fair is just winding up and one cannot see anything but plastics, plastics and more plastics. Shouldn’t such fairs be plastic free events considering how injurious plastics to our life and times?
At the Konkan Railway taxi stand taxi drivers station are locked in a fight with a Goa Miles taxi driver for carrying back a passenger from the station! Taxi rates in Goa are set at somewhere near 25 per km, which is actually the up-down fare. App-based taxis must charge for only up km i.e. the rate must be12.5 per km since they are app based. What do they charge? A reader says he paid 176 from Aquem to Benaulim which a distance of 7 km and that works out to25 per km. This is a steal!
MMC and Fomento are busy fighting each other while Sonsoddo’s toxic fumes fill the air with venom to take a toll on the lungs of locals here. A well governed society should be able to say: This is the life! But, no, it is — This, is the life?
— R Fernandes, Margao

SWACHH, SWACHH, SWACHH WHAT?
The very unjustified and uncalled for public statement by Chief Minister Pramod Sawant that few government servants ask money from public in the name of Ministers while promising jobs is a matter of great concern.
If the Chief Minister has evidence to that effect, why is he not ordering a probe and taking stringent action against those few government servants? Instead of accusing government staff of corrupt deeds, Pramod Sawant should keep a vigil on his allegedly very corrupt Ministers and the huge wealth they are acquiring. Making such sweeping baseless accusations against Government officials is both insulting and de-moralizing.
Infact over the last few years the job scamsters Vinod Desai and Deepashree Mhato while bragging on their close connections with top BJP brass have duped hundreds of youth to the tune of crores. They have told their victims that the money was shared with senior BJP leaders. Will the Chief Minister dare to direct that the police must by a public notice, call for a meeting of all those duped so that the accused scamsters of this very mega job scam are brought to book. The BJP leaders involved in this loot should also not be spared.
Another outburst by the Chief Minister that 20% of the bureaucracy is not working only further exposes the sheer administrative impotency of Pramod Sawant. And how has he quantified at 20% that figure of idling government staff? Is it a figure he plucked out of thin air?
Mr Chief Minister you have been in the saddle for over three months. With that honeymoon period now over, you should stop blabbering and start performing or make way for someone competent and honest who can steer our now sinking Goa grappled with a host of serious pending issues through the current storm.
— Aires Rodrigues, Ribandar

CREAM OF MERIT
Everyone will agree that the Indian Administrative Services (IAS), Indian Foreign Services (IFS), Indian Police Services (IPS) and the Indian Revenue Services (IRS) exams are amongst the toughest examinations to pass and thus it is logical that those bureaucrats possessing these degrees are the cream of merit in the country.
However, it has been noticed for a very long time that these meritorious bureaucrats when they become assertive and independent are not to the liking of the politicians who then resort to transferring them, many a times demoting them because they have been performing their duties with great discipline and keeping their principles as well as using their expertise and specialising in order to conduct the various departments to which they have been appointed. It would not be a hyperbole to state that many of these bureaucrats are even more knowledgeable and much more well conversant with the duties that are their domain, but political interference disallow meting of their wise counsel because of vested interests.
Although it may be natural that these highly specialised bureaucrats are also family men who are at times vary that they have to please the political class, still in most circumstances their expertise in their particular fields make them the vital pivots on which the particular departments run. It would be in the fitness of things that the political class treat them as advisers and utilize their merit for the good of the running of the particular departments, thus utilizing their expertise to the maximum.
— Elvidio Miranda, Panaji