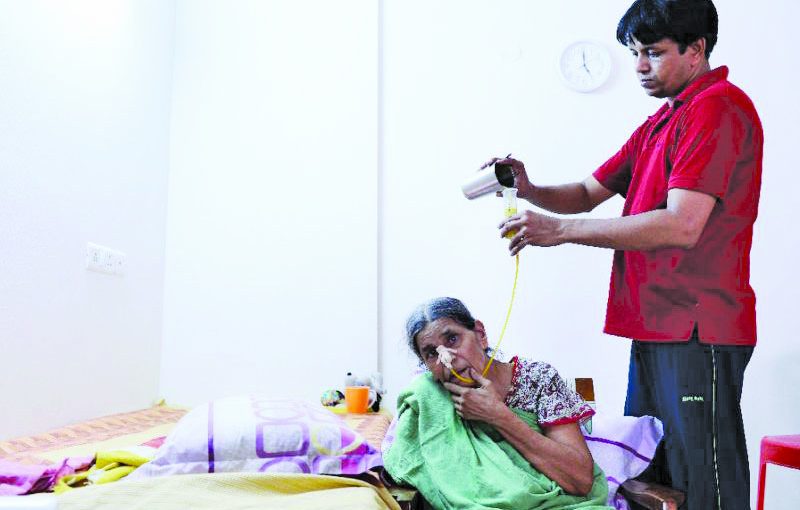 OVERDOSE: 62-year-old Indian woman Suresh Rani, given an overdose of sodium by doctors at a hospital which resulted in a permanent brain damage, is being fed through a tube by her son Rohit Goyal at their home in Noida, in New Delhi

Doctors can be negligent, irresponsible or greedy. Do not go by the reputation of the hospital as even the Hiranandani hospital in Bombay was accused of selling kidneys. Be aware of what you can and cannot expect from your doctor. We bring you important judgments on medical negligence

What is medical negligence?

Bhalchandra @ Bapu & Another v. State of Maharashtra
[AIR 1968 SC 1319]
The Supreme Court opined that while negligence is an omission to do something which a reasonable man, guided upon those considerations which ordinarily regulate the conduct of human affairs, would do, or doing something which a prudent and reasonable man would not do; criminal negligence is the gross and culpable neglect or failure to exercise that reasonable and proper care and precaution to guard against injury either to the public generally or to an individual in particular, which having regard to all the circumstances out of which the charge has arisen, it was the imperative duty of the accused person to have adopted.
Nature of Medical Profession and Negligence in Medical profession

Jacob Mathew v. State of Punjab & Another
[(2005) 6 SCC 1]
In this case, the Supreme Court while dealing with the case of negligence by professionals also gave illustration of medical and legal profession and observed as under:

“In the law of negligence, professionals such as lawyers, doctors, architects and others are included in the category of persons professing some special skill or skilled persons generally. Any task which is required to be performed with a special skill would generally be admitted or undertaken to be performed only if the person possesses the requisite skill for performing that task. Any reasonable man entering into a profession which requires a particular level of learning to be called a professional of that branch, impliedly assures the person dealing with him that the skill which he professes to possess shall be exercised and exercised with reasonable degree of care and caution. He does not assure his client of the result. A lawyer does not tell his client that the client shall win the case in all circumstances. A physician would not assure the patient of full recovery in every case. A surgeon cannot and does not guarantee that the result of surgery would invariably be beneficial, much less to the extent of 100% for the person operated on. The only assurance which such a professional can give or can be understood to have given by implication is that he is possessed of the requisite skill in that branch of profession which he is practising and while undertaking the performance of the task entrusted to him he would be exercising his skill with reasonable competence. This is all what the person approaching the professional can expect. Judged by this standard, a professional may be held liable for negligence on one of two findings: either he was not possessed of the requisite skill which he professed to have possessed, or, he did not exercise, with reasonable competence in the given case, the skill which he did possess. The standard to be applied for judging, whether the person charged has been negligent or not, would be that of an ordinary competent person exercising ordinary skill in that profession. It is not necessary for every professional to possess the highest level of expertise in that branch which he practises.”

Achutrao Haribhau Khodwa & Others v. State of Maharashtra & Others
[(1996) 2 SCC 634]
This Court noticed that in the very nature of medical profession, skills differs from doctor to doctor and more than one alternative course of treatment are available, all admissible. Negligence cannot be attributed to a doctor so long as he is performing his duties to the best of his ability and with due care and caution. Merely because the doctor chooses one course of action in preference to the other one available, he would not be liable if the course of action chosen by him was acceptable to the medical profession.

Medical Negligence under Section 304A of IPC

Kurban Hussein Mohammedali Rangawalla v. State of Maharashtra
[(1965) 2 SCR 622]
In this case, while dealing with Section 304A of IPC(death caused by negligence) , the statement of law by Sir Lawrence Jenkins in Emperor v. Omkar Rampratap, [(1902) 4 BLR 679], was cited with approval:

“To impose criminal liability under Section 304A, Indian Penal Code, it is necessary that the death should have been the direct result of a rash and negligent act of the accused, and that act must be the proximate and efficient cause without the intervention of another’s negligence. It must be the causa causans; it is not enough that it may have been the causa sine qua non.”
Whether service rendered by medical practitioner “service” under Section 2(1) (o) of the Consumer Protection Act, 1986?

Indian Medical Association v. V.P. Shantha & Others
[(1995) 6 SCC 651]
Three-Judge Bench of Supreme Court held that service rendered to a patient by a medical practitioner by way of consultation, diagnosis and treatment, both medicinal and surgical, would fall within the ambit of ‘service’ as defined in Section 2(1) (o) of the Consumer Protection Act, 1986. Deficiency in service has to be judged by applying the test of reasonable skill and care which is applicable in action for damages for negligence.
With reference to difference between medical profession and other occupations, the Court made the following observations:

“In the matter of professional liability professions differ from occupations for the reason that professions operate in spheres where success cannot be achieved in every case and very often success or failure depends upon factors beyond the professional man’s control. In devising a rational approach to professional liability which must provide proper protection to the consumer while allowing for the factors mentioned above, the approach of the Courts is to require that professional men should possess a certain minimum degree of competence and that they should exercise reasonable care in the discharge of their duties. In general, a professional man owes to his client a duty in tort as well as in contract to exercise reasonable care in giving advice or performing services”.
C.P. Sreekumar (Dr.), MS (Ortho) v. S. Ramanujam
[(2009) 7 SCC 130]
This Court had an occasion to deal with the case of medical negligence in a case in which the respondent was hit by a motor-cycle while going on his bi-cycle sustained a hairline fracture of the neck of the right femur.
Pre-operative evaluation was made and the appellant Dr. Sreekumar, on considering the various options available, decided to perform a hemiarthroplasty instead of going in for the internal fixation procedure. The respondent consented for the choice of surgery after the various options have been explained to him. The surgery was performed the next day. The respondent filed a complaint against the appellant for medical negligence for not opting internal fixation procedure. The Supreme Court in the case held that the appellant’s decision for choosing hemiarthroplasty with respect to a patient of 42 years of age was not so palpably erroneous or unacceptable as to dub it as a case of professional negligence.

Principles to be followed while deciding case of medical negligence

Kusum Sharma & Ors vs Batra Hospital &Medical Research
[II (2010) SLT 73]
In this case, the Supreme Court enumerated the following principles to be followed while deciding whether medical professional is guilty of medical negligence:

I. Negligence is the breach of a duty exercised by omission to do something which a reasonable man, guided by those considerations which ordinarily regulate the conduct of human affairs, would do, or doing something which a prudent and reasonable man would not do.
II. Negligence is an essential ingredient of the offence. The negligence to be established by the prosecution must be culpable or gross and not the negligence merely based upon an error of judgment.
III. The medical professional is expected to bring a reasonable degree of skill and knowledge and must exercise a reasonable degree of care. Neither the very highest nor a very low degree of care and competence judged in the light of the particular circumstances of each case is what the law requires.
IV. A medical practitioner would be liable only where his conduct fell below that of the standards of a reasonably competent practitioner in his field.
V. In the realm of diagnosis and treatment there is scope for genuine difference of opinion and one professional doctor is clearly not negligent merely because his conclusion differs from that of other professional doctor.
VI. The medical professional is often called upon to adopt a procedure which involves higher element of risk, but which he honestly believes as providing greater chances of success for the patient rather than a procedure involving lesser risk but higher chances of failure. Just because a professional looking to the gravity of illness has taken higher element of risk to redeem the patient out of his/her suffering which did not yield the desired result may not amount to negligence.
VII. Negligence cannot be attributed to a doctor so long as he performs his duties with reasonable skill and competence. Merely because the doctor chooses one course of action in preference to the other one available, he would not be liable if the course of action chosen by him was acceptable to the medical profession.
VIII. It would not be conducive to the efficiency of the medical profession if no Doctor could administer medicine without a halter round his neck.
IX. It is our bounden duty and obligation of the civil society to ensure that the medical professionals are not unnecessary harassed or humiliated so that they can perform their professional duties without fear and apprehension.
X. The medical practitioners at times also have to be saved from such a class of complainants who use criminal process as a tool for pressurizing the medical professionals/hospitals particularly private hospitals or clinics for extracting uncalled for compensation. Such malicious proceedings deserve to be discarded against the medical practitioners.
XI. The medical professionals are entitled to get protection so long as they perform their duties with reasonable skill and competence and in the interest of the patients. The interest and welfare of the patients have to be paramount for the medical professionals.

V.N.Shrikhande vs Anita Sena Fernandes
[(2011) 1 SCC 53]
In this case, the Supreme Court had held that in cases of medical negligence, no straitjacket formula can be applied for determining as to when the cause of action has accrued to the consumer. Each case is to be decided on its own facts. If the effect of negligence on the doctor’s part or any person associated with him is patent, the cause of action will be deemed to have arisen on the date when the act of negligence was done. If, on the other hand, the effect of negligence is latent, then the cause of action will arise on the date when the patient or his representative- complainant discovers the harm/injury caused due to such act or the date when the patient or his representative-complainant could have, by exercise of reasonable diligence discovered the act constituting negligence.

No cure/ no success is not a negligence

Dr. M. Kochar vs Ispita Seal
[FIRST APPEAL NO. 368 OF 2011, decided on December 12, 2017]
In this recent case, the National Consumer Dispute Redressal Commission (NCDRC) was confronted with the issue of failure in IVF procedure. The complainant in the case complained of failure in IVF procedure and demanded compensation from the Doctor on account of medical negligence. The National Commission in the case held that “No cure/ no success is not a negligence”, thus fastening the liability upon the treating doctor is unjustified.