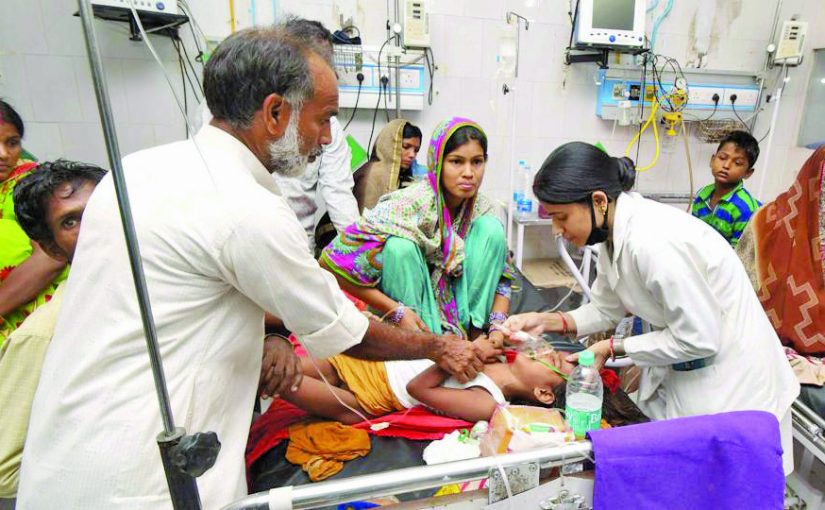 NEGLIGENCE: Over a hundred children in a government hospital in Bihar have died of extreme encephalitis. The doctors are not even able to diagnose what caused it!

Doctors should be given security against angry relatives when things go wrong. But they should also be held accountable for their sins of omission and commission

I do believe that doctors should be given security against patients who turn violent. At the same time I believe that doctors should be accountable to patients. Doctors get beaten up because in the case of an unexpected death or injury they do not explain to the patient’s relative what went wrong. Even if they have made an honest mistake they should admit it to the patients.
The ground reality is that with honourable exception, doctors, particularly in government hospitals, are arrogant and indifferent towards poor patients. Everyone is screaming over the assault on some resident doctors in a government hospital in Kolkata. Indeed the Indian Medical Association has called for a country wide strike in sympathy with the doctors in Kolkata. Over the dadagiri of didi Mamta. But nobody in the medical community is talking about over a hundred children dying of extreme encephalitis in Bihar. Nobody talks about the images we see very often in national papers of relatives having to carry patients on cycles or hand carts because they don’t have access to ambulances in remote locations or because they can’t pay for the ambulance. In Goa the state-of-the-art ambulance equipped with life-saving equipment will arrive at your home if you call. But if you have the misfortune of not surviving the heart attack or stroke there is no transport to carry the body home.
Doctors are humans. They can make mistakes. But they have an obligation to tell their patients what their problem is and details of the treatment they are planning. They have to explain the side effects of not only an operation but even procedures carried out like CT scans. If you talk to your doctor friends they will tell you that they themselves have a CT scan or X-ray taken as rarely as possible because of the radiation that is emitted from these machines.
Which is why when you are having a CT scan or an MRI you are alone in a room in the MRI tunnel; even the technician, not to mention the doctor, are outside the room and safely out of the radiation zone. The MRI machine is so powerful that there are urban legends of people wearing something metallic going a little too close to the machine and getting sucked into the machine because of the magnetic waves.
I have been a victim of the most blatant medical negligence despite good intentions because of the bias and the ignorance of doctors. And of course the ego of the doctors which will not let them admit that they may have made a mistake. Way back in 1989 I got beaten up savagely on my spine by hired goons allegedly at the instance of the then speaker of the Goa Assembly Dayanand Narvekar. The then Head of Department of medicine Dr NGK Sharma put me on steroids in the belief that I had polymyositis which is a muscle wasting disease. Because I was in acute pain and was admitted as a VIP patient he probably was under pressure to increase the dosage of steroids to give me some relief. Though the GMC had a neurologist he was either not consulted or was too scared to contradict the opinion of the Head of Department of Medicine.

TWO senior doctors at the GMC — Dilip Amonkar and Shantaram Surme — along with Shridhar Pai, owner of Pai Nursing Home, Vaddem, Vasco, were named accused in an alleged medical negligence case involving the death of a Vasco-based minor, Raveena Rodrigues.
The girl was admitted at Pai Nursing Home and was found to have acute appendicitis. Dr Amonkar was requested to perform the operation. He removed the appendix on July 3, 2010. Post-operative care was taken by Pai Hospital. Ms Ravina was discharged from Pai Hospital on July 5. Ravina suffered continuous pain, could not eat, and would throw up after drinking water. When Dr Surme was called and informed about the same he told her to carry on with the medicines given to her. When Ravina’s abdomen was found enlarging she was again admitted in the hospital on July 9. Dr Surme gave some injection and kept Ravina on drips at Pai Hospital and told the family that it was acidity. Dr Surme advised a sonography only on July 10, when there was no improvement. An ultrasound carried out at 6:30 pm revealed fluid in the abdomen which was confirmed to be blood. Thereafter, as per the advice of Dr Amonkar, Ravina was shifted to GMC Bambolim where she was operated on again by another doctor and where she eventually died on July 29, 2010.
Following her death, a case was filed by the girl’s parents, who suspected that their daughter was not given proper medical care. After a public outcry, the government formed an inquiry committee that found there was medical negligence.
In 2017 Additional Sessions Judge, South Goa, Margao, directed framing of charge against the petitioners under Section 304-A of IPC. An application against this order was brought by the doctors but was dismissed by the High Court in August 2017 which found that there were many prima facie issues that needed to be decided through trial:
Records revealed that no test was conducted before conducting the surgical operation — either by Dr Amonkar or Dr Surme. Dr Amonkar did not at any time ask to see the consent form or any reports.
Dr. Amonkar himself admitted that the operation theatre at Pai Nursing Home was not up to the mark and was in unhygienic condition. Statements by the nurse and the patients family showed Ms Ravina was not in extreme pain and was not in such a deteriorating condition that the appendix was going to burst which brought into question why Dr Amonkar did not shift her to GMC and carry out the operation there.
Dr Surme’s statement that he took blood from the patient for a blood test was contradicted. The nurse present with the patient flatly denies this could have happened.
The court also pointed out that when the patient was brought to the GMC Dr Amonkar said he was far away, at Amona in Bicholim. However, call records place him at Merces and later at Panjim.
The case is still pending….

In a landmark order, the Supreme Court on October 24, 2013, directed Kolkata’s AMRI Hospital and three of its doctors to pay an amount of 5.96 crore as compensation to Dr. Kunal Saha — a US-based Indian doctor — who lost his wife Dr. Anuradha Saha due to medical negligence in 1998. This judgment came around 15 years after his wife died owing to faulty medical treatment. The court ordered that he was entitled to 6% interest on the compensation amount from 1999 — a total of11.41 crore.
Noting that treatment with dignity was “not only a fundamental right” but “also a human right”, the court asked the Centre and the state government to “deal strictly” with doctors, hospitals and nursing homes found to be negligent with patients.
This is the highest amount ever awarded by an Indian court in a medical negligence case. The previous highest compensation amount was `1 crore, awarded by the SC to Prasanta Dhanaka in May 2009.