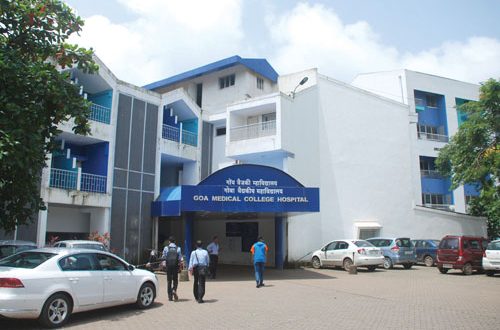 PRIVATE PRACTISE: Over 50% of the consultants in the GMC who are full-fledged employees and are banned from doing any private business, engage in private practice even during office hours!

Chief Minister Pramod Sawant has admitted that 30% of government servants are engaged in private business and that there are agents claiming that they will get you a government job against a bribe. Sawant has asked Goans not to pay any bribes to anybody for government jobs which will be decided purely on merit. This is easier said than done because no jobs can be got in the government without paying the price for it

Chief Minister Pramod Sawant has himself admitted that 30% of government servants are engaged in private business on office time.
This is the first time any Goan chief minister has admitted that for many government servants their official job is at best only time pass. Even worse, many attend to their own personal businesses after they sign the register.
The most notorious examples — which are seriously injurious to the lives of citizens of Goa — can be found at the Goa Medical College, Health Department and primary health centres. In theory government doctors are banned from doing any private practice. In reality, most of them devote more time to their private consultation and practice than their government jobs.
I can understand the compulsion to do private practice when the salaries of even professors, leave alone residents and interns, were relatively poor. But government doctors, whether in the GMC or the health services, are paid handsomely thanks to the Seventh Pay Commission. Even attendants get 25,000 or more at the start of the scale. Nurses get over50,000 at entry level. And HODs and professors of course get more than a lakh salary every month. They are also entitled to government quarters and other allowances. Doctors working for the GMC — which is considered primarily a teaching hospital — also get not only leave for Ganesh and Christmas, but also a summer vacation.
Right from the time I came from Goa in 1983 and visited government doctors practicing privately, the question I used to be asked was is there going to be a raid to see if they were at their government job?
Talking of private practice the most notorious case is the operation carried out by HOD of surgery, Dr Dilip Amonkar, at the Pai Nursing Home in Vasco. Amonkar was apparently requested by one of his former students to do an appendicitis operation on a young lady, Ravina Rodrigues. The patient was discharged after the operation. But she developed complications and went back to the hospital. An ultrasound was finally conducted because her abdomen was swelling and blood was found. The patient was immediately shifted to the GMC. Since Dr Amonkar had operated on her against the rules he was contacted to attend to the patient. Amonkar refused to go to the GMC claiming that he was very far away though examination of his mobile showed that he was in and around Panjim.

During the criminal case that was filed against Dr Dilip Amonkar he is reported to have claimed that the hygiene at Pai Nursing Home was not satisfactory, but he was unable to explain why he had gone ahead with the operation if so. During the hearings the question came up if Ravina needed the operation at all. The appendix is an organ which does not seem to have any particular function. It needs to be removed only if it gets swollen up or gets infected. There are many private hospitals which make money by needlessly removing the appendix.
General surgeons are the biggest group in the GMC who engaged in private practice. The Dean is the administrative head of the GMC. For a long period of time the GMC was headed by Dr VN Jindal who was the best neurosurgeon not only in Goa but the country. He was the one who single-handedly set up the neurosurgery superspecialty in the GMC. Subsequently, the entire Jindal family, including his wife and two children, became part of the GMC. When there was a strike in the health services where Dt Manju Jindal was working, she performed surgery in the GMC. She was absorbed as an assistant professor in the Gynaecology Department where she is now HOD.
Both Dr Jindal’s daughter and son got admission in the GMC. The daughter not only finished her MBBS but also managed to get admission to the superspeciality Radiology Department. She did not complete her compulsory period of serving the hospital for three years and got married and moved to Delhi. The son, to the surprise of the father, chose to do gynaecology and not neurology or surgery. So all four members of the Jindal family benefited from their connection with the GMC. In fact the son even topped the MBBS exam. Whether by merit or influence we do not know. But the important issue is that the dean, who was supposed to prevent other doctors from doing private practice, himself used to operate at the Vintage Hospital in Panjim.
The story of the present dean — Dr Sanjay Bandekar — is even worse. He was HOD of the Orthopaedic Department. He rarely used to be in the hospital and had a flourishing private practice. It was alleged that he used to take equipment from the department for his operations on private patients. Similarly, there was a case of the long standing HOD of the Radiology Department, Mahesh Sardesai, who used to spend more time on his private practice in Porvorim.

The majority of the doctors in the GMC, with rare exception, engaged in private practice with the knowledge and perhaps approval of the acting dean, who himself used to do private practice when he was HOD of Ortho. Indeed, Dr Bandekar who displaced Dr Pradip Naik as dean, was suspended from GMC. He was later appointed superintendent of the GMC by Vishwajit Rane. True to the proverb that birds of the same feather flock together, he was appointed dean by the honourable Health Minister and is assisting him to privatise the GMC.
It is not only the Health Department, including the GMC, where government servants do more private practice than at their official job. The government employs a large number of teachers. The government has the largest number of private primary schools in Goa, most in Marathi medium. The teachers in government schools both at the primary and secondary level make more money giving tuitions than from their job as governments servants.
A lot of the best government teachers are employed by private coaching classes. While the students of government schools and higher secondary may not get much attention in their schools, they get much more attention at the tuition and coaching classes. This is because suddenly a number of coaching classes came up to prepare students for various competitive exams like SET, NET, and NIIT and entrance to the All India medical colleges. This is despite the fact that unlike the bad old times trained and qualified teachers get handsome salaries. Since schools in Goa function only from 8 am to 2 pm there is a lot of time for teachers to give tuitions and run other private businesses.
The largest employer in Goa are the PWD and the Electricity departments. But when your power goes or your water supply breaks down nobody responds to the helpline. If there is a power failure late in the evening you cannot find anybody to attend to it. There may be shortage of linesmen. But it is strange that you can never get a linesmen to attend to a complaint because they are always attending to some other fault. This is also true of the Water Supply Department which is more involved in encouraging private tapping or diversion of water than in attending to complaints of citizens. Whenever there is a shut down the PWD’s Water Supply Department is supposed to give you tanker water free. In the first place the number that is listed never works. And even if you get water it will be muddy water. The best water is reserved for hotels and restaurants who pay the staff of the Water Supply Department.

The Chief Minister only spoke about 30% of the government employees being engaged in private business. Mr Pramod Sawant did not talk about the 70% of government employees who might be in their seat but harass the citizen for speed money. Getting anything from the office of the Mamlatdar or Collector’s office is a nightmare. You cannot get admission to school or apply for a government job without a domicile certificate or a residence certificate. You cannot get your sale deed registered unless you hire an agent. The value of the flat or house on which you pay registration fees is determined by the Deputy Civil Registrar. He can raise the value or lower it at his whim.
Once when I was in a civil registrar’s office I saw an agent giving him lakhs in cash even though no cash transactions are permitted. What is true of the Collector’s Office is true of any government office, including the municipalities. I recall that I could not get a death certificate from the CCP till I paid the clerk speed money.
Why blame the employees? The employees are only following the example of the ministers. Government jobs are sought after because they provide much better salaries as compared to the private sector. Government jobs also offer you total security. Even if you are found guilty of some offense you can only be suspended for three months. During the period of suspension the government has to pay you 90% of you salary. If no charge is made within three months, the government servant has to be paid the whole salary.
The late CM Manohar Parrikar caught the then MD of the IDC taking a bribe. But he could not do anything since he had not followed the proper procedure. The irony of government jobs in Goa is that ministers and MLAs demand money for government jobs. The amount of money demanded is in proportion to how much money you can make on the job.
For instance the most coveted jobs are those of police inspectors, Excise Inspectors and jobs in the Town & Planning Department. The average Goan does not mind paying for the job because he knows that he cannot get a government job without paying for it. I have known people who have borrowed money from private money lenders to pay agents.
Chief Minister Pramod Sawant obviously is aware of this job racket. He has claimed that he is against it and has asked all job seekers not to pay anyone promising a job because of his connection with any minister. Sawant will soon realize that the biggest obstacle to prevent looting for government jobs will come from his colleagues. All his Cabinet colleagues and MLAs supporting the BJP alliance will withdraw support to Sawant if he stops them charging for jobs. Our MLAs consider charging for jobs as one of their fundamental rights. The reason why the administration is so poor is that the jobs are given not on merit but purely depending on how much you can bribe the agents of the ministers controlling the concerned departments.