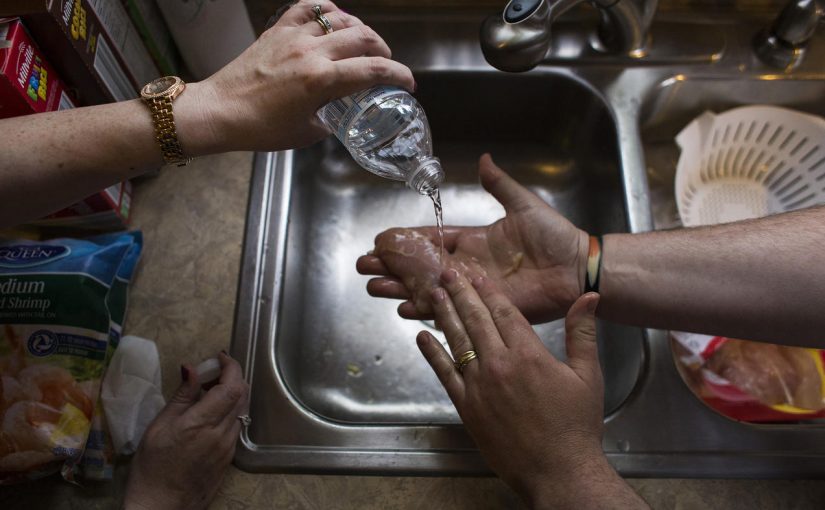 DARK DAYS: The water crisis is affecting everyone rich and poor. While the rich may be able to postpone worrying for now, courtesy tanker water, the day is not far when even tanker water will not be available

Of the 17 countries facing the highest level of water stress — where 80% of water available is used up annually — India receives the maximum annual rainfall, according to an IndiaSpend analysis of a new study by the international think-tank World Resource Institute(WRI).
All other countries on the list belong to the arid and semi-arid regions of Africa, the Middle East and South Asia, receive almost half of India’s annual rainfall and have fewer natural water sources.
Even within India, all nine states and union territories that report the worst water stress lie in the Indo-Gangetic plain, which has a web of big and small rivers and lakes.
Chandigarh tops this list, as per the WRI, followed by Haryana, Rajasthan, Uttar Pradesh, Punjab, Gujarat, Uttarakhand, Madhya Pradesh and Jammu and Kashmir.
Why is India water-stressed despite widespread rainfall and a large number of water sources? “Overexploitation and mismanagement of water is the reason for this water stress,” said Shashi Shekhar, former secretary, ministry of water resources and Ganga rejuvenation, and a senior fellow with WRI India.
Inefficient agriculture, that uses up to 80% of all water resources in the country, is one of the primary reasons for India’s water stress, said Shekhar. Groundwater extraction — which provides for 40% of the country’s water needs — is significantly more than recharge.
The 17 countries dealing with acute water stress are home to nearly a quarter of the world’s population (1.75 billion). India ranks 13th on the list but at 1.36 billion, its population is more than triple that of the aggregate of the other 16 countries grappling with a water crisis, the study said.
About 600 million Indians are dealing with high-to-extreme water stress wherein over 40% of the annually available surface water is used every year, according to a 2018 study by government think-tank Niti Aayog 2018, reported by IndiaSpend on June 25, 2018.
About 200,000 people die every year due to inadequate access to safe water. The situation is likely to worsen as the demand for water exceeds supply by 2050, and India will face a 6% loss in its gross domestic product by 2050, the Aayog study said.
It is important for countries to address water stress because it can exacerbate conflict and migration, endanger water-dependent industries (mining, thermoelectric power generation, and manufacturing) and threaten food security, said the WRI study.
Climate change is also exacerbating this crisis leading to erratic rainfall, we further explain.

Over a third (2.572 billion) of the world’s population lives in the 44 countries with “high” to “extremely high” water stress, said the WRI study. Qatar, Israel and Lebanon are ranked first, second and third in the list of countries dealing with the worst water stress. India, as we earlier said, is ranked 13th, while neighbouring Pakistan stands at 14th, according to the study which uses data from 1960 to 2014, excluding anomaly events.

Except for Gujarat and Madhya Pradesh, other water-stressed Indian states have mismanaged their water, according to the Niti Aayog report.
The Aayog analysed and scored 24 states on nine broad sectors and 28 indicators, including groundwater, irrigation, farm practices and drinking water. Haryana, Rajasthan, Uttar Pradesh, Punjab and Uttarakhand scored below 60% on all the indicators.
The Aayog report did not have scores for Jammu and Kashmir, Puducherry and Chandigarh.

Irrigation is a critical factor

The historic exploitation of water for agriculture is responsible for the crisis in the states in the Indo-Gangetic plain, as we said earlier.
Punjab, Haryana and West-Uttar Pradesh are the worst-affected Indo-Gangetic states in terms of water stress and the main reason for this is their 40-year-old cropping pattern in which paddy, sugarcane, and wheat dominate — all water-guzzlers, as per Shekhar.
Since the government ensures the procurement of these water-intensive crops, their acreage grew in the past decades. But so did the depletion rate of level of groundwater, the primary source of irrigation.
All these states have alluvial soil (known to absorb the water), receive sufficient rainfall and have a number of rivers crisscrossing the region — factors that should have protected them from water stress, Shekhar pointed out. But the groundwater in these regions has reached a level that it will now take decades to recharge, he added, and that too only if no extraction takes place.

Shekhar also has reservations about the WRI study, because it uses historical government data along with other indicators.
In India, the Central Ground Water Board (CGWB) collects data with just one question in mind: is the extraction of water faster than its percolation? This, Shekhar said, presents an incorrect picture as CGWB data does not reflect water stress faced by states such as Maharashtra, Karnataka and Tamil Nadu.
“In fact, the government data has not been updated for the last five to 10 years, because there is a lot of pressure on the CGWB not to update any new region as water-stressed,” Shekhar said.
The government data also take averages for very large areas, which does not yield a granular picture. “There are 30 million pump sets in this country, we don’t know how much water are these pumps exploiting. So, we don’t really know how much groundwater we are extracting,” said Shekhar.
Climate change is exacerbating the situation by causing longer dry spells and impacting the intensity of rainfall in India. Over 110 years to 2010, the number of heavy rainfall events in India has increased by 6% per decade. This is attributed to rising temperatures caused by climate change, as IndiaSpend reported on August 24, 2018. During heavy rainfall events, water does not percolate into the ground to recharge the aquifer and quickly runs off.