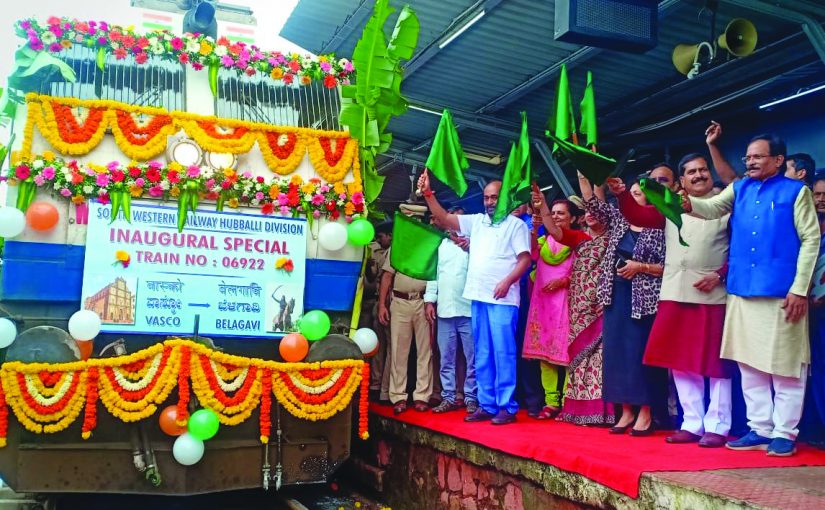 THE Goa BJP govt suddenly declared all Goan villages as Open Defecation Free (ODF)! Just last month they were struggling to ‘count’ the areas which were not ODF, then, voila! It is zero! It would be in the fitness of things to congratulate the Minister from Sancoale — who proudly acknowledge the same as ODF by their silence — and the Zuari Industries Ltd — who are primarily responsible for the slums there! Now the former can divert their CSR funds to other avenues! Just for the records, did they ever spend their CSR on toilets for these areas? Congratulations to the Margao MLA as well: he says Monte Hill is ODF by virtue of his silence!
To be able to make such a brazen official, monumental declaration, which is totally opposite to the ground reality starkly visible to all of 15 lakh inhabitants, is terrifying! One can but shudder at the implications.
The take away from all this is: you cannot trust the govt which is in denial mode on all fronts! This now proves that fish brought into Goa is NOT formalin free! That the reason for mass immigration is not because Goans do not want to work. That it IS possible to have jobs reserved for Goans in companies in Goa. We know that Maharashtra is reserving all jobs in some companies set up in Goa only for Maharashtrians: yet Goa Govt says this is not possible! So, rivers will not be handed over to private players, casinos will move out of the Mandovi, no coal dust pollution in Vasco, mining stopped due to NGOs, foreign jaunts for the Tourism Dept will boost the treasury of Goa and not drain it, Congress MLA’s crossing over to the BJP will boost development in their constituencies — forget the lynching’s and blackmailing triggered by the party’s policies — the list goes on and on and is now clear! By the way: being comfortable with the latter debunks the call to boycott Chinese fireworks.
Firefighting is proving disastrous. It is more than a year since garbage dumping near Dabolim airport was in the news. Where there are dump yards there is bound to be stray dogs and birds. Any wonder why there are stray dogs on the runways? Will bird hits be far? Firefighting means: wait for the fire then act. Avoiding fires means planning to avoid fires?
— R Fernandes, Margao

Teachers’ Day
IT’S not just on Teachers’ day, but always that we need to remember our dear teachers for the role they play in moulding our future.
All through school and up to the completion of my Law degree I was tremendously blessed with caring teachers who taught with hope, passion, motivation and a sense of direction. Throughout my student days they encouraged me in extra-curricular activities paving my way to participate in elocution, debating and essay contests all along.
Great teachers can make a big difference on our lives, for besides making a lasting impression in the classroom they can cast a positive influence on our lives. My teachers were more than mere educators. They also played a role as a dear friend, counsellor and mentor.
Many of them have over the years passed away but their fond memories will always linger. A regular teacher may merely direct us along the right path, but great teachers inspire and challenge us to carve out our path in life.
I shall always remain heavily indebted and beholden to all my dear teachers who imparted to me all their knowledge and guidance that has immensely helped me in all my, often lonely, crusades.
— Aires Rodrigues, Ribandar

SAVE FOSSIL FUELS
THE price paid due to the burning of fossil fuels in the atmosphere is not only immense, but becomes a vicious cycle. For coal burning, imagine the equation C + O2 -> CO2. For every 12 parts of coal burnt, 44 parts of carbon dioxide is generated, but alas at the expense of 32 parts of oxygen being taken out of the air that we breathe considering the atomic weight and molecular weight of carbon and carbon dioxide respectively. In case of petrol which has 6 to 8 carbon molecules, for every litre burnt in the internal combustion engine 2.36 kgs of carbon dioxide is generated and about 66% of that figure oxygen from the air is consumed. Diesel which has between 10 to 15 carbon molecules, if averaged out, emits about twice that amount of carbon dioxide which is 4.4 kgs per litre of diesel used, while again removing 16 parts in 44 parts of precious oxygen from the air.
In Goa we have 14 lakh four-wheelers and 11 lakh two-wheelers. If only half this number (that is 7 lakh and 5.5 lakh respectively) of vehicles consume only one litre per day, the amount of carbon dioxide generated is in excess of 14 lakh kgs and 11 lakh kgs respectively which is a staggering amount. This in turn traps heat in the atmosphere during summer and is washed out as acid rain during the monsoon, thus leading to global warming and climate change as well as pollution. Although 60% of Goa is forested, the number of trees required to turn this carbon dioxide into oxygen by photosynthesis acting as lungs to convert to oxygen is thus a large proportion. So walk, cycle or switch over to electrical vehicles to save environment from climatic degradation.
— Elvidio Miranda, Panaji

BJP ROBBING PEOPLE
ThE latest media report say that the stock market has crashed, Rupee has faltered and our Indian economy is in complete doldrums. Who should we blame or hold accountable for this entire mess? One thing is for sure, the ruling Narendra Modi-led BJP government currently has no money to run this country and due to this is now getting all set to extort the hard-earned money of even the common men as a last resort by imposing hefty fines on traffic defaulters unleashing a new Motor Vehicles Amended Act all over India.
The following fines are to be imposed as per the new Act: Over Speeding 1000 to2000, Driving without insurance 2000, Driving without helmet1000 + 3 months license suspension, Dangerous driving 5000, Drunken driving10000, Driving without seat belts 1000 and one of the notable changes to the Motor Vehicle Act includes a penalty of10,000 to those who do not give way to an ambulance on the road. The common men should now therefore get ready to experience more shocks and enjoy their real ‘achhe-din’ and which were promised with a lot media-hype by Mr Modi himself during the run-up to the 2014 Lok Sabha election campaigns.
I think that the only man who is capable of bringing our Indian economy back on track is our highly educated former Prime Minister/Finance Minister, Dr Manmohan Singh and no other leader because he alone will know on how to fix the problem and to deal with such a highly complicated matter. We are already 10 years behind, money is spent on bullet train, on erecting huge statues, on governments advertisements of self-glorification and on mindless visits of our current Prime Minister, Narendra Modi to foreign countries. Common man’s money has indeed been wasted, already spent recklessly and I just don’t know how some dumb blind fools still trust a most arrogant current ruling Narendra Modi led BJP government at the centre. God alone save India from political bankruptcy and our Indian economy….. Jai Secular India!
— Jerry Fernandes, Saligao