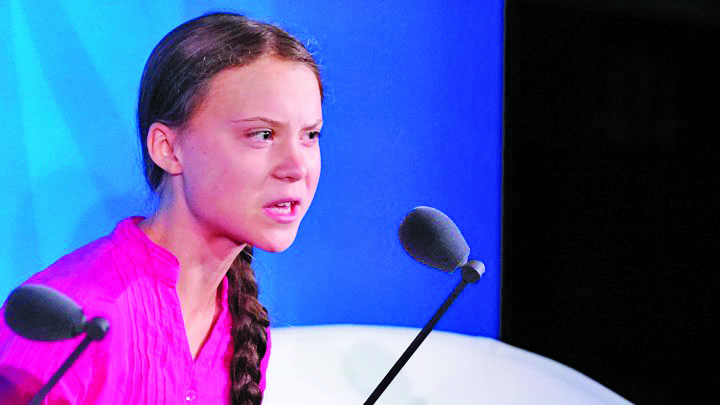 Teenage climate change activist Greta Thunberg on Monday, September 23, 2019, opened the United Nations Climate Action Summit with an angry condemnation of world leaders for failing to take strong measures to combat climate change — “How dare you,” she said.
Days after millions of young people took to the streets worldwide to demand emergency action on climate change, leaders gathered for the annual United Nations General Assembly aiming to inject fresh momentum into stalling efforts to curb carbon emissions.
A visibly emotional Thunberg, 16, said in stern remarks at the opening of the summit that the generations that have polluted the most have burdened her and her generation with the extreme impacts of climate change.
“This is all wrong. I shouldn’t be up here. I should be back in school on the other side of the ocean yet you all come to us young people for hope. How dare you,” said the Swedish teenager, her voice quivering.
“You have stolen my dreams and my childhood with your empty words,” Thunberg said, adding that the plans that leaders will unveil will not be enough to respond to the rate of the planet’s warming.
Thunberg has galvanized a new wave of climate change activism through her weekly Fridays for Future school strikes, which she began with her weekly, solitary protests outside of the Swedish parliament.
UN Secretary-General Antonio Guterres had warned governments ahead of the event that they would have to offer action plans to qualify to speak at the summit, which is aimed at boosting the 2015 Paris Agreement to combat global warming.
In his opening remarks, he tried to capture the urgency of climate change and called out the fossil fuel industry.
“Nature is angry. And we fool ourselves if we think we can fool nature, because nature always strikes back, and around the world nature is striking back with fury,” Guterres said.
“There is a cost to everything. But the biggest cost is doing nothing. The biggest cost is subsidizing a dying fossil fuel industry, building more and more coal plants, and denying what is plain as day: that we are in a deep climate hole, and to get out we must first stop digging,” he said.
US President Donald Trump, a climate change denier who has undone every major US regulation aimed at combating climate change, made a brief appearance in the audience of the summit along with Vice President Mike Pence and Secretary of State Mike Pompeo. He did not give remarks but he listened to remarks by German Chancellor Angela Merkel and Indian Prime Minister Narendra Modi.
Former New York Mayor Michael Bloomberg, who serves as the UN special envoy on climate action, called out Trump’s stealth appearance before he spoke on Monday: “Hopefully our deliberations will be helpful to you as you formulate climate policy,” he said to audience laughter.
Merkel announced Germany would double its contribution to a UN fund to support less developed countries to combat climate change to €4 billion from €2 billion.
Among the day’s other initial announcements was one from the Marshall Islands, whose president Hilda Heine said she would seek parliamentary approval to declare a climate crisis on the low-lying atoll, already grappling with sea level rise.
Heine said her country and New Zealand, Sweden, Norway, Denmark and others who form the “High Ambition” bloc at U.N. climate negotiations, will commit to achieving net-zero greenhouse gas emissions by 2050.
Over 60 world leaders and CEOs of energy and financial companies are expected to address the conference and announce climate finance measures and transitioning from coal power.
With climate impacts such as extreme weather, thawing permafrost and sea-level rise unfolding much faster than expected, scientists say the urgency of the crisis has intensified since the Paris accord was agreed.
The agreement will enter a crucial implementation phase next year after another round of negotiations in Chile in December. Pledges made so far under the agreement are nowhere near enough to avert catastrophic warming, scientists say, and last year carbon emissions hit a record high.
Over the past year, Guterres has called for no new coal plants to be built after 2020, urged a phase-out of fossil fuel subsidies and asked countries to map out how to achieve carbon neutrality by 2050.
While some countries have made progress, some of the biggest emitting countries remain far behind, even as wildfires, heat waves and record temperatures have provided glimpses of the devastation that could lie in store in a warmer world.
In a measure of the gap between government action and the ever-louder alarms sounded by climate scientists, the United Nations Development Program said that 14 nations representing a quarter of global emissions have signaled that they do not intend to revise current climate plans by 2020.
Pope Francis, in a message broadcast to the conference, called for honesty, responsibility and courage to face “one of the most serious and worrying phenomena of our time.

Here’s the full transcript of Thunberg’s speech, beginning with her response to a question about the message she has for world leaders

“My message is that we’ll be watching you.
“This is all wrong. I shouldn’t be up here. I should be back in school on the other side of the ocean. Yet you all come to us young people for hope. How dare you!
“You have stolen my dreams and my childhood with your empty words. And yet I’m one of the lucky ones. People are suffering. People are dying. Entire ecosystems are collapsing. We are in the beginning of a mass extinction, and all you can talk about is money and fairy tales of eternal economic growth. How dare you!
“For more than 30 years, the science has been crystal clear. How dare you continue to look away and come here saying that you’re doing enough, when the politics and solutions needed are still nowhere in sight.
“You say you hear us and that you understand the urgency. But no matter how sad and angry I am, I do not want to believe that. Because if you really understood the situation and still kept on failing to act, then you would be evil. And that I refuse to believe.
“The popular idea of cutting our emissions in half in 10 years only gives us a 50% chance of staying below 1.5 degrees [Celsius], and the risk of setting off irreversible chain reactions beyond human control.
“Fifty percent may be acceptable to you. But those numbers do not include tipping points, most feedback loops, additional warming hidden by toxic air pollution or the aspects of equity and climate justice. They also rely on my generation sucking hundreds of billions of tons of your CO2 out of the air with technologies that barely exist.
“So a 50% risk is simply not acceptable to us — we who have to live with the consequences.
“To have a 67% chance of staying below a 1.5 degrees global temperature rise — the best odds given by the [Intergovernmental Panel on Climate Change] — the world had 420 gigatons of CO2 left to emit back on Jan. 1st, 2018. Today that figure is already down to less than 350 gigatons.
“How dare you pretend that this can be solved with just ‘business as usual’ and some technical solutions? With today’s emissions levels, that remaining CO2 budget will be entirely gone within less than 8 1/2 years.
“There will not be any solutions or plans presented in line with these figures here today, because these numbers are too uncomfortable. And you are still not mature enough to tell it like it is.
“You are failing us. But the young people are starting to understand your betrayal. The eyes of all future generations are upon you. And if you choose to fail us, I say: We will never forgive you.
“We will not let you get away with this. Right here, right now is where we draw the line. The world is waking up. And change is coming, whether you like it or not.
“Thank you.”