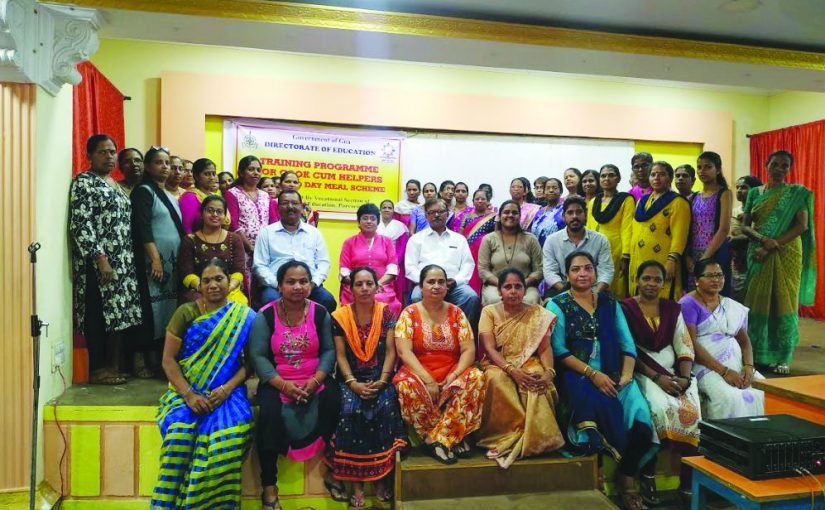 MEALS! The Directorate of Education organised a training programme for Cook-Cum-Helpers under the Mid Day Meal Scheme in all the 12 Talukas of the State of Goa covering North, Central, and South Education Zones. The purpose was to train the Cook-Cum-Helpers and the Self Help Groups/ Mahila Mandal/ P.T.A. Varsha Bhide spoke on personal hygiene and different aspects of hygiene and food safety and food handling. Manasi Kudchadkar spoke on importance of nutritious cooking practices, use of local seasonal vegetables and kitchen gardening. A Taluka-level cooking competition was organized on the topic “Healthy and Nutritious Food item for Children”. The programme was followed by the prize distribution by the A.D.E.I’s at the taluka level dealing with the mid-day meal scheme. Assistant Director of Education Maria Rose Grace D’Souza welcomed the participants and spoke on the importance of health and hygiene. Vocational Education Officer Jaywant Naik explained the importance of quality of mid-day meals

This 24 year old woman named Nibedha — an engineering student from Bengaluru — is one of my clear favourites on this planet. Next time I visit Bengaluru, I am clearly going to invite her out to dinner if she will accept me. I am determined to see her machine. What is appears to do is amazing!
Last week, she won the Impact Maker Award of 50K euros (40 lakh) for her successful work on the Trashbot. The award incidentally came from Oslo (Norway) and not New Delhi. For those who want to know what a Trashbot is, this is a garbage processing machine which she invented (together with her mentor, Saurabh Jain). The plant can deal with daily unsegregated wastes of 500 kg, 2 tonnes, 5 tonnes and 10 tonnes. The machines have been installed at Mundra Port, and now soon at the Chennai Airport. This is a product of our very own flesh and blood, made in India — but in Goa, three of our decision-making people from the BJP government of Goa, are flying to Sweden this week to negotiate an expensive new plant for the garbage dump at Sonsodo in Margao! It is a tragedy that those involved in deciding on garbage plants do not handle garbage themselves. The officials know about Trashbot, but want a project not in lakhs but crores! The last experimental (and very very expensive) joke in this connection, for which we are all now paying heavily, is the late Parrikar’s decision to spend146 crore on the Saligao garbage plant whose parts came from seven foreign countries, including Germany. This was supposed to be a state-of-the-art plant, doing only unsegregated waste, with 22 waste fractions. Today, the plant is demanding segregated waste to function! Worse, a large number of tankers take the effluent of this plant and dump it in the Tonca sewage plant! Here is a new variant which only our politicians are capable of inventing: one waste management plant generates waste for another!
Who’s willing to stop all this nonsense in Goa?
— Claude Alvares, Goa

OPEN RESIGNATION LETTER
Dear comrades,
I have strong and fundamental differences with latest approach adopted by Mahadayi Bachao Abhiyan (MBA) in dealing with the state and central government regarding water resources of Mahadayi /Mandovi river basin despite myself contributing heavily to improve the long pending Goa State Water Policy on which you have failed to seek satisfactory and positive response from this government.
Therefore this is to inform you that being a policy strategist, political ecologist, professional scientist and technical person fully experienced in global, national and local water management  issues, I  wish to dissociate myself with effect from today November 1, 2019 as a member of MBA to follow my own independent path to advocate and seek a permanent, durable and long term sustainable solution for water security of state of Goa to be engulfed by rising sea level irreversibly by the end of this century if not earlier.
The issue of free, unrestricted and undiverted flow of all the streams and rivers entering Goa including Mahadayi river is absolutely non-negotiable. As I have reiterated time and again under MBA subject to fresh and accurate new surveys, based on available official information only 1761 MCM freshwater resources out of a theoretical 8520 MCM are available WITHIN THE STATE for utilization under ‘business as usual” scenario.
Karnataka Neeravari Nigam has received permission on October 17, 2019 from MOEFCC, Govt of India  to divert a stupendous 111 MCM water which is 6.3 percent of total utilizable water resources of Goa. Records show that Goa government must have known this since April 2019 itself when Karnataka government approached the MOEFCC to get EC.
In the history of interstate water resources disputes in India 6.3% diversion from a lower, riparian state’s dying and drying water  resources is relatively a huge quantity.
This is total betrayal of trust of the people of Goa who are clueless about pending state water policy.
Please note that people of Goa have vehemently rejected the August 2018 award of MWDT. Our expensive public funded legal team and the witnesses they paraded before MWDT have betrayed the trust of our simple people. The government and political establishment is scared to admit that we are rapidly marching towards unrecoverable, polluted, rivers, man-made droughts, contaminated groundwater resources, a very severe drinking water supply crisis and desertification of this state. It is clear that soon we’ll face the new culture of establishing techno-intensive desalination plants.
I had warned MBA time and again that the political establishment in Goa has been a total disappointment in understanding the basic issues of planning for ecological, environmental, water, energy and food security of this ecologically fragile state and the long term needs for sound policies, strategies, institutions and mechanisms to achieve the same. Its total fear in entrusting the micro-planning issues to local elected authorities such as PRIs and ULBs has been demonstrated clearly by non-devolution of  mandatory powers under 73rd and 74th Constitutional amendments in past 25 years. This has caused a complete microplanning paralysis at the grassroots level. Established mechanisms utilizing Goa’s age-old traditional wisdom in securing local water resources have been made powerless.
I wish to work henceforth with the people of Goa independently. Thanks for everything.
— Dr. Nandkumar M. Kamat, Goa

Rotten apples
THIS Diwali a number of advisories against Chinese fireworks refer to them as being illegal etc. Are fireworks from India all legal? Definitely not: we all know this. Are all the fireworks from China illegal? Again not all.
The Indian industry is past master at conning the public. Take even the critical pharma industry which, by virtue of its nature, should have been strictly controlled. They manufacture strips of 8 rather than 10 and consumers get fooled by the rates.
FMCG manufacturers package at different non-preferred quantities, and keep changing packaging size to falsely ‘show’ better savings. Consumers are flummoxed and end up paying more! Liquor companies subvert the law on liquor advertising by resorting to surrogate advertising.
Philippine President Duterte closed the Borocay Island, which contributes 20% of all Tourism revenue, for six months, saying the place stinks with no proper sewage treatment brought about by careless local government. Duterte’s spokesperson said, “The closure is necessary to ensure that Boracay will be there for the next generation.” Our MLAs and tourism stakeholders will think he’s mad. Our North coastal belt needs such a closure too.
We need to declare a war on drugs and not accept the same to ‘boost’ tourism! We happily shout out: ‘Say no to drugs’! while supporting those living off the same. It is not only the ‘Godfathers’ who need to be caught, but their minions too.
— R Fernandes, Margao

POOR PERFORMANCE!
Over the years Goa has seen some very outstanding Governors, others reasonably average and the rest not up to the mark at all. In 1971 at the age of 11 it was my privilege to meet the then Lt. Governor Nakul Sen. I have also interacted with all other successive Governors including the outgoing Mridula Sinha. Her performance has been very lackluster to say the least while she blindly towed the ruling BJP line by even swearing in Ministers well past midnight. The Governor is constitutionally bound to question the government on its wrong doings and this duty is something Mridula Sinha abdicated through her entire tenure.
Mridula Sinha, who always travelled in a five car convoy despite never facing a security risk, will be remembered for having last year burdened the tax payers by buying a Mercedes E200 for a whopping `62 lakhs. She also stopped drinking regular water and switched to only tender coconut water. The Raj Bhavan ordered two dozens tender coconuts everyday. What will she do now when she returns to her native Bihar?
What was also highly objectionable was that Mridula Sinha prefixed Dr to her name despite it being illegitimate for her to do so. Her biodata on the Raj Bhavan website does not say she was ever awarded a Doctorate. It would be prudent for Mridula Sinha, before she leaves Goa after her five year long sojourn, to humbly apologize to the people of the State for misrepresenting that she held a Doctorate.
The State is paying exorbitantly for the upkeep of the Governor (and entourage) with most of it an utter criminal waste of public funds. No wonder the Goa Raj Bhavan is the only Raj Bhavan in the country adamantly refusing to come under the purview of the RTI Act. This veil of secrecy on the affairs at the Raj Bhavan cannot continue as transparency and accountability in the functioning of the government cannot be subdued. It is arrogance borne from a deliberate habit of abuse of power that our politicians and Governor think that they are above the law.
The role of the Governor is very important as the Chief Executive of the State has Executive Legislative, Judicial and Discretionary powers that if exercised judiciously and with integrity could ensure smooth good governance. Sadly, there have been times, (Mridula Sinha is a glaring example) where through mutual cozy arrangements between politicians and the Raj Bhavan, this important office has been reduced to a rubber-stamp controlled by the ruling party.
— Aires Rodrigues, Ribandar